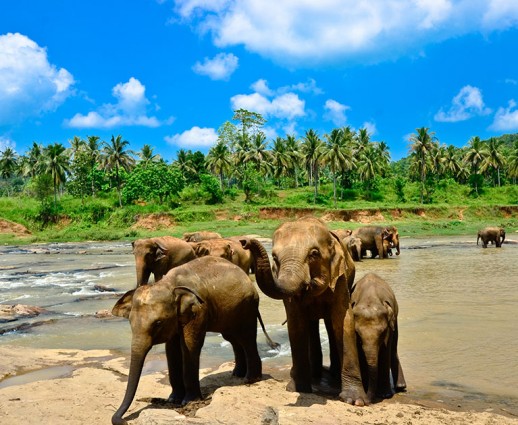 The island of Sri Lanka sits off the southeast tip of the Indian subcontinent, with a land area much the same as that of Tasmania. Set in the clear waters of the Indian Ocean, its documented history dates back more than 3,000 years and its location has made it an important stop for travellers since the days of the Silk Road. Today, it’s home to more than 21 million people and many different languages, cultures and ethnicities. This relatively small country offers a rich diversity in experiences: here are our top five reasons to visit.

Sri Lanka’s capital city, Colombo, is a blend of colonial-era buildings, bustling street markets and grand temples. By day you can explore the city’s historic Fort and Pettah districts, or venture far off the tourist trail on a guided tuk-tuk ride. Shop until you drop on Paradise Road, then reward your retail efforts with a cocktail in the historic, nineteenth-century Galle Face Hotel. Trincomalee, on Sri Lanka’s east coast, is a bustling port city that is famous for its many beautiful beaches and one of the best blue whale-watching places in the world.

For a glimpse into the country’s past, pay a visit to its former capital city, Anuradhapura, which dates back to the fourth century BC. The city is scattered with ancient bell-shaped dagobas and the world’s oldest documented tree: a sacred fig tree that was planted in 249 BC. Anuradhapura, along with Polonnaruwa and Sigiriya, form the island’s Cultural Triangle in the North Central province. Once home to the Sinhalese royalty, its temples, lotus-covered tanks (reservoirs) and majestic, rocky outcrops that once served as palace fortresses make this region a must on any Sri Lankan itinerary.

Thanks to its location in the Indian Ocean, there are plenty of lovely beaches from which to choose. Surfers will love the southern beaches such as Mirissa Beach and Araguam Bay, while Bentota, just a short drive from the capital city of Colombo, has plenty of great shopping and restaurants. If you’re looking for somewhere far from the tourists, head for Nilaveli – find a quiet spot on the powder-soft sand and treat yourself to a delicious crab curry.

There are 26 national parks in Sri Lanka, which between them account for nearly ten percent of the nation’s total area. Within these parks you’ll find a wealth of remarkable wildlife, ranging from leopards and sambar deer to toque macaque monkeys and peacocks. The Sri Lankan elephant is one of three recognised sub-breeds of Asian elephant and can be seen in herds in the wild at several national parks including Kaudulla and Minneriya.

The teas that are grown in the Sri Lankan central highlands are world-famous for their quality, with the first plantation established here more than 150 years ago. A visit to Nuwara Eliya (the heart of the tea-growing region) for a tour of one of the tea estates is a great way to experience the vivid-green, mist-shrouded landscape of this lush region, learn about the history of tea-growing and sample a freshly brewed cup.

Sri Lanka has been blessed with wonderful diversity in scenery and culture, but it is the warmth of its people that will make your time here unforgettable. Your personal travel manager can help you to plan an itinerary or find the best tour to suit you.