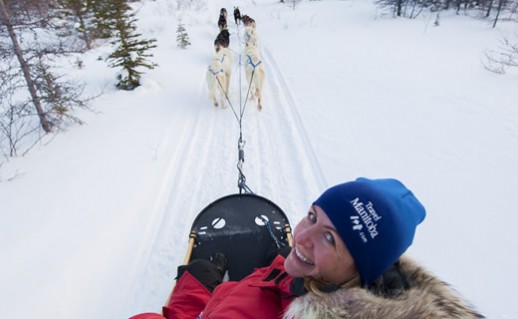 The town of Churchill, population 899, is located in northern Manitoba, a two-hour flight from the province’s capital city, Winnipeg. It has just 900 inhabitants and the nearest town of any real size is Thompson, more than 400 kilometres away, with no road to connect the two. However, despite (or perhaps because of) this isolation, Churchill attracts thousands of visitors every year, regardless of the season, rewarding those who are sufficiently intrepid to make the journey with unforgettable wildlife encounters and natural beauty.

Every spring and fall, more than 250 species of birds flock to the Churchill region, treating it as a stopover on their annual migration routes and prompting enthusiastic bird watchers to flock along with them. Head out onto the tundra and you’re likely to spot snowy owls, tundra swans and peregrine falcons, while true enthusiasts will have their binoculars ever-ready in the hopes of spotting rare species such as the harlequin duck or Ross’s gull.

The beluga or white whale spends its winters in the near-freezing waters of the Arctic Ocean, but in the warmer summer months, they migrate to coastal areas such as Hudson Bay, where more than 57,000 whales congregate each year to hunt and mingle. Churchill is the ideal location from which to base yourself if you’re interested in spending time getting to know these unique and sociable marine mammals – from a zodiac, a whale-watching boat or even a kayak. Eavesdrop on their whale-chatter using a hydrophone and you’ll soon learn why they bear the nickname, “sea canary”.

The town of Churchill, in Canada’s northern Manitoba, is considered the polar bear capital of the world, thanks to the hundreds of bears that spend the autumn months of October and November here, waiting for Hudson Bay to freeze over sufficiently for them to be able to head out onto the ice. Take a tour in a purpose-built tundra vehicle for a safe but intimate encounter with these so-called “Lords of the Arctic”, or stay in an eco-lodge that’s strategically-located adjacent to the bears’ migration route.

One of the best places in the world to see the Northern Lights, a visit to Churchill during the winter months will give you a front-row seat to this spectacular natural light show. While the long, dark nights of the Canadian winter are not a great time to be sitting outside, you don’t have to dress like a polar bear to endure the wait: instead, you can wile away the hours with a front row seat in the comfort of a purpose-built plexiglass dome. The key to a successful viewing is being far from sources of artificial light, so another option is to allow time in your itinerary for an overnight stay at one of Churchill’s rustically-luxurious wilderness eco-lodges.

Given that there are no roads beyond the town itself, if you want to experience the vast wilderness that lies beyond Churchill, you really only have two ways of getting around: tundra buggy or dog sled. Whether you prefer to rug up and snuggle down for the ride of a lifetime or have a turn at taking the reins yourself, this is an unforgettable way to experience the magic of the tundra. And don’t despair if you’re visiting Churchill during the warmer months when the snow has disappeared: your huskies are just as happy pulling a cart with wheels so you can enjoy the summer wildflower meadows.

Your personal travel manager can help you plan a Canadian itinerary that delivers the best of the magical Hudson Bay region.