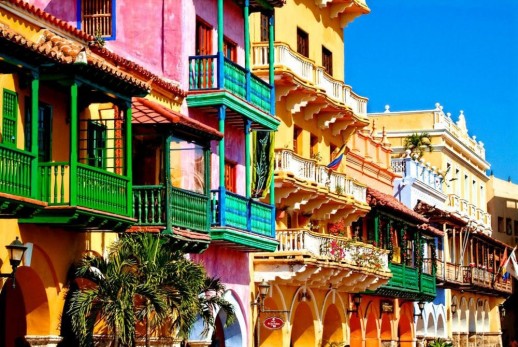 From Columbia and Venezuela in the north to Chile and Argentina in the south, and thirteen other countries and territories in between, South America is a vast continent of great diversity: in culture, history and geography. We think it should be on everyone’s travel bucket list, but we’ve also devised a secondary bucket list of the main attractions that we think should be included on a dream South American itinerary.

Visit an estancia or ranch for an impressive display of horsemanship, courtesy of Argentina’s famous gauchos, and you’ll also be treated to a mouth-watering Argentine barbecue, featuring plenty of succulent, locally-produced and expertly-cooked asada. There are plenty of estancias that can be visited as a day trip from Buenos Aires, and when you get back to the city, head out to one of its many tango clubs, which are famous for opening late and staying open even later.

Lake Titicaca is the largest lake in South America and is often described as the world’s highest commercially navigated lake, thanks to its position, straddling the border between Bolivia and Peru at an altitude of 3,812 metres. The south-eastern tip of the lake is just 150 kilometres from Bolivia’s capital city, La Paz, from which you can take a boat to Isla del Sol, where it’s well worth spending a couple of nights so that you have plenty of time to explore the 500-year old remnants of Incan culture and soak up the unique culture of the 800 or so indigenous families that call the island home.

From the legendary pink river dolphins of the Amazon to the elusive jaguar of the Pantanal, Brazil has a wealth of wildlife that will keep you enthralled from dawn until well after dusk. Brazil is considered to have the greatest biodiversity of any country on Earth, so you can try your hand at piranha fishing, go whale watching off the coast of Florianopolis or join the beach bunnies on Rio’s Copacabana beach.

The Atacama Desert is one of the driest places on Earth, but its arid landscape of wind-sculpted canyons, vast salt lakes and shooting geysers make it a captivating destination. At the opposite, southern end of Chile, the dramatic peaks of the Torres del Paine National Park provide another opportunity for a photographic frenzy.

From its remote Pacific coastline to its Amazon rainforests, Colombia is one of South America’s fastest growing tourist destinations, and the city of Cartagena is one of its most popular locations. Set on the Caribbean coast, its 16th-century walls were constructed to defend the city from marauding pirates, but today provide a great vantage point from which to take in the city’s Spanish colonial architecture.

Although the majority of South America sits in the southern hemisphere, the equator actually passes through Brazil, Colombia and the nation which takes its name from that line on the map: Ecuador. The equator runs just north of the capital city, Quito, and it’s an easy day trip from Quito to the “Mitad del Mundo”, where you can stand with one foot in either hemisphere.

Somewhat off the beaten track for most visitors to South America, Guyana receives roughly the same number of foreign visitors each year as Machu Picchu receives in a day, and Suriname (formerly Dutch Guyana) is similarly low-key. Guyana is the only South American nation with English as its official language, whereas Suriname’s official language is Dutch, but in both countries, the cultures are blends of Amerindian, African, Indian, European and Chinese. Because they’re relatively untouristy, it’s easy to immerse yourself in authentic cultural experiences, staying in community-run lodges and learning about traditional village life.

Although they straddle the border between Brazil and Argentina, the cascades that make up the world’s largest waterfall system, Iguaçu, are also just a stone’s throw from Paraguay’s second-largest city: Ciudad del Este. Along the way, it’s well worth stopping at Saltos del Monday: a spectacular 40-metre high waterfall where the crowds are much sparser than across the border.

The ancient Incan city of Machu Picchu is South America’s most visited attraction, and for good reason, but it’s only one of the many spectacular historic and pre-historic sites this varied country has to offer, ranging from the ancient adobes structures of Chan Chan, the intricate stoneworks of Ollantaytambo and the vast but mysterious Nazca lines.

The Rio de la Plata is more than 200 kilometres across at its widest point, forming an effective border between Argentina and Uruguay. A one-hour ferry ride across the river from Buenos Aires will have you in Colonia del Sacramento, a picturesque town that dates to the seventeenth century, and whose Barrio Histórico has been awarded UNESCO World Heritage status. Be sure to try some of the excellent Uruguayan wines while you’re here.

With a long stretch of Caribbean coastline, Venezuela has some of the best beaches in South America. Some 160 kilometres north of Caracas, you’ll find the Archipelago Los Roques: a collection of close to 300 islands that form a national park that’s littered with deserted beaches and fantastic snorkelling and diving spots. Base yourself on the main island of Gran Roque and take day trips by boat to the other islands, returning each evening to a banquet of freshly-caught local seafood.

This is just the tiniest sample of the many sights and experiences South America has to offer. Your personal travel manager can help you put together an itinerary that includes all of these and more.