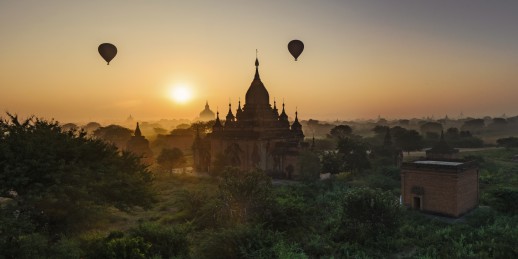 Few places spark the imagination more than Myanmar. The secret land, formerly known as Burma, is free of ATMs and network coverage, making everyday essentials like mobile phones and credit cards practically useless. Only pristine $100 US bills can be exchanged for Myanmar Khat at the airport, with no folded, creased or marked bills accepted. If your currency isn’t perfect, the only option is to try your luck on Yangon’s black market.

This may sound terrifying for some, but for others the chance to escape the outside world can represent a magical adventure into the unknown.  Myanmar was the inspiration for poems by Kipling and Orwell and with good reason. The fabled nation has many jewels in its crown, from the bustling ancient city of Yangon to the serene floating villages of Inle.

The former capital Yangon is home to the 2,500 year old Shwedagon Pagoda. Coated in over 60 tons of pure gold and standing nearly 100 metres high, Myanmar’s iconic landmark resembles a stranded alien spaceship piercing the city’s skyline. The city boasts the largest number of colonial period buildings in South East Asia and markets flood the city’s narrow streets every morning with colour and disappear as quickly as they came.

Bagan is arguably Myanmar’s biggest tourist destination, dotted with over 2,200 temples dating back to the 11th century and little else. Tourists flock to the area to enjoy the stunning landscapes which superlatives fail to do justice. Hot air balloons depart every sunrise and sunset offering spectacular panoramic views and horse drawn carriages along dusty dirt tracks offer a magical trip back in time. As the area grows in popularity the hospitality industry flourishes, with boutique restaurants and luxury hotels springing up to accommodate for visitors.

The floating villages of Inle lake are home to entire communities that bob and drift around the lake freely. The farms take advantage of the water hyacinth that allows them to grow vegetables on the water using a basic form of hydroponics and must be seen to be fully appreciated. Inle Lake is also home to the bizarre jumping cat monastery, where felines jump through hoops for no apparent reason.

In Mandalay where “the dawn comes up like thunder” according to Kipling, an ancient palace sits upon a hill providing commanding views of the surrounding countryside. Buddha prophesised a great city would be founded at the foot of the hill and since then the ancient city has held significant religious importance for Buddhists in the region. Mandalay’s zoo is the only place in the world you can catch a glimpse of the incredibly rare Burmese Roofed Turtle, thought to be extinct until its re-emergence in 2002.A highlight of Mandalay is the spectacular lake from which you take a boat leaving before sunrise and arriving in Bagan after sunset, providing unhindered views of Myanmar’s luscious countryside.

In 2006, the government established a new capital city at Naypyidaw, there’s nothing to see apart from a few ministries, but is still a great attraction. The military government created the centrally located capital for defence reasons, however failed to draw people from the densely populated cities of Mandalay and Yangon. Meaning much of the city is empty and many of the newly erected buildings stand vacant and form a vast ghost town. There’s also an impressive 16 lane highway leading to the city that goes widely unused, you might see a vehicle every five minutes or so.

One of the best things about Myanmar is that tourism is still very much in its infancy, which means you can enjoy the sights in relative peace and tranquillity compared with other Mekong destinations. Unfortunately this can’t last forever, with ATMs to be introduced later this year and hotels being built in record numbers to cope with the ever increasing demand.