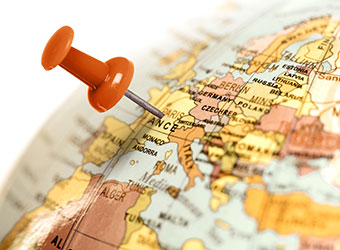 The Early Bird Catches the Worm to UK and Europe

Early bird season for travel to Europe usually begins in October. It is a good time to start thinking about whether you’re going to spend next northern summer cycling through French countryside, canal boating in rural Wales or enjoying long lunches in Tuscan villages – or just staying home and hearing about other people’s adventures. If you’re in planning mode right now, we’ve got a few tempting suggestions that might have you tweaking your plans or extending your stay.

Prague is a well-known location on any European itinerary these days, but you’d be wise to set aside an extra day when you’re in this beautiful city to travel the hour or so to Kutná Hora. This mediaeval city, also known as the “City of Silver” because of its silver mines that once provided much of the wealth for this region, is now best known for its two impressive but very different churches. The Gothic St Barbara’s Church is renowned for its mediaeval frescoes and flying buttresses, whilst the more macabre Sedlec Ossuary is a small chapel that is decorated and furnished with human bones from the estimated 70,000 skeletons that are contained here.

Not to be confused with the French Riviera’s glamorous Cap Ferrat, Cap Ferret sits on a headland southwest of Bordeaux on the Atlantic coast. On one side you have stretches of nearly-deserted ocean beach; on the other, kid-friendly harbour beaches that look across the bay to neighbouring Arcachon, and in between the two, this cute seaside town that is nestled among towering pine trees. Take a ferry across the bay for a spot of shopping in Arcachon or to climb Europe’s tallest sand dune at Pilat, ride a bike through the pine trees on the network of quiet streets and cycle paths, and finish the day at one of the harbourside restaurants.

If you’re planning on channelling your inner Von Trapp in Salzburg, take a side trip roughly 100 kilometres south by train or car to the Gastein Valley, and the three spa towns of Dorfgastein, Bad Hofgastein and possibly the most picturesque of all: Bad Gastein. Nestled into the High Tauern Mountains, with lovely nineteenth century hotels and villas clinging to the rocky walls and a 1,000-foot waterfall tumbling through the middle of the town, Bad Gastein and its sister villages have long drawn tourists for the combination of alpine scenery and thermal spring waters. By winter, it’s a popular ski destination, but in the summer, you can hike the many mountain trails, visit the 30,000 square metre Alpentherme spa resort or ride the gondola up Stubnerkogel to test your nerves on the 140-metre long suspension bridge and soak up views of Austria’s highest mountain, Grossglockner, from the Panorama platform.

Travel all the way down to the south of Italy and when you reach the heel of the boot, you’re in Puglia. Long overlooked by tourists lured to Italy by stories of Tuscan cuisine, Venetian drama and Roman history, this region is finally starting to attract the attention it deserves but you can still find plenty of quiet spaces to enjoy all that’s on offer: miles of pristine white Mediterranean beaches interspersed with dramatic limestone sea cliffs and caverns, the beehive-like stone trulli of Alberabello (which is just one of a string of photogenic mediaeval hilltop towns), and regional delicacies such as ciambotta (a fish-based stew), orecchiette (ear-shaped pasta) and pasticciotto (a flakey-crusted, creamy custard-filled, black cherry dessert). Wildlife lovers can visit Europe’s largest pink flamingo colony and Alta Murgia National Park, where a single limestone cave is the site of more than 30,000 fossilised dinosaur footprints.

Millions of tourists flock to Cornwall every year to enjoy its stunning coastal scenery, mild climate and pretty fishing villages. And yet, just 45 kilometres to the southwest lie a collection of 140 islands, of which just five are inhabited, which attract a fraction of the visitor numbers despite their official status as an Area of Outstanding Natural Beauty. Let’s start with the beaches, of which there are at least 35 lovely examples with postcard-ready turquoise water and white sand. There’s also plenty of rugged coastline to provide a little drama, and coastal walks are one of the most popular activities on the islands. The Tresco Abbey Garden takes advantage of the islands’ climate and generous sunshine hours, whilst specially-planted windbreaks do the rest: the Garden is home to a vast collection of sub-tropical plants that flourish outdoors nowhere else in the United Kingdom. The islands are also a historical treasure trove, with ruined examples of everything from early Christian chapels to standing stones to an artillery fort that was built at the end of the English Civil War.