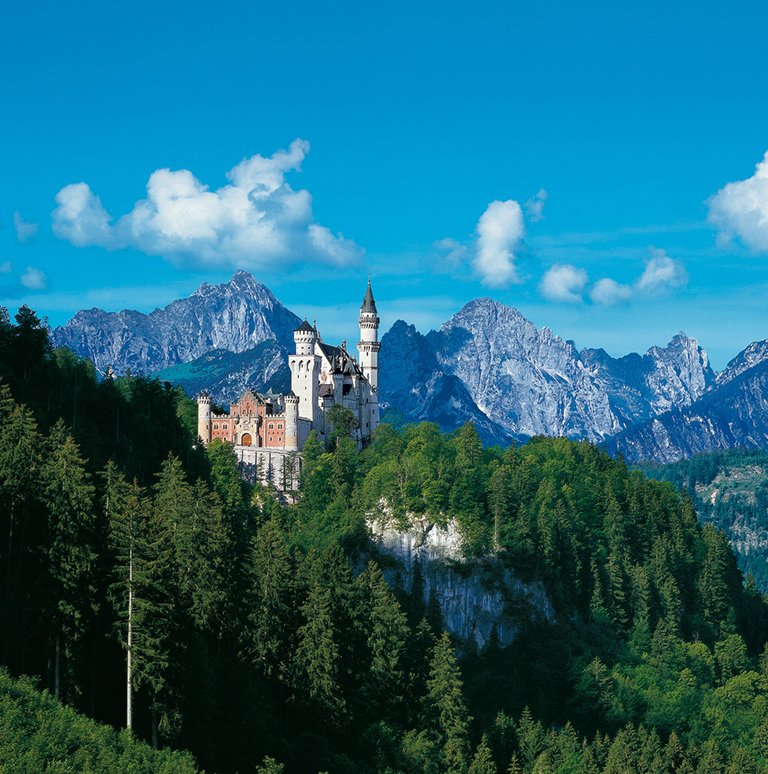 Discover the World’s Most Beautiful Castles

Castles hold a certain sense of allure for many people. Whether you’re wanting to live out a fairytale fantasy, have a fascination with the history, art and culture found within their walls, or want to explore some of the most innovative architectural structures in the world, a castle visit is sure to be a highlight on any holiday. From Japanese fortresses to geometric castles shrouded in mystery, discover our favourite castles below.

On a rugged hill in Bavaria lies “the castle of the fairytale king”. Commissioned by King Ludwig II of Bavaria, Neuschwanstein Castle (German for ‘New Swanstone Castle) was to be a retreat from the political turbulence. Unfortunately King Ludwig II never saw the completion of the castle. In 1886, after his death, Neuschwanstein Castle opened to the paying public. The castle remains one of the most popular and spectacular castles in all of Europe, and even the world. 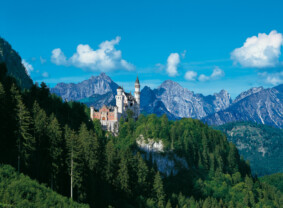 Built into the mouth of a large cavern, halfway up a 123-metre cliff, lies one of Europe’s most dramatic castles - Predjama Castle. It’s almost impossible to tell when the castle ends and the cavern begins, which adds to the appeal of this remarkable site. When it was constructed in the 13th century, Predjama Castle was considered virtually impenetrable. In fact, there is a story of a thieving baron called Erazem Lueger who started a war with the Habsburgs. He managed to elude the Emperor’s forces by hiding out in the castle. For an entire year and one day, he snuck out of the castle through a secret tunnel to replenish his food and drink supply from a nearby town. Eventually he was sold out by his servant. The castle has been reconstructed many times over the years but retains its Renaissance-style. 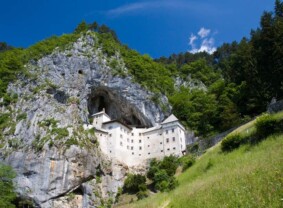 Shaped like the bow of a ship and perched on a rocky hill, the Alcázar of Segovia is one of the most recognizable castles in Spain. The stone castle was built in the twelfth century as a fortress. Since then, the castle has served as a royal palace, a state prison and even a military academy. If the castle seems somehow familiar but you are unsure as to why, it’s possibly because it served as one of the inspirations for the castle in Walt Disney’s Cinderella. 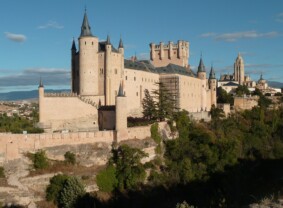 On the crags of Castle Rock lies the iconic Edinburgh Castle. Archaeologists believe that people have occupied the castle’s site since the Iron Age, but its royal ties can only be traced back to the twelfth century, when King David I built the St. Margaret’s Chapel in honour of his mother. If you’re interested in Scotland’s royal history, look for the remnants of the gilded initials, “MAH”, for Mary Queen of Scots and her second husband Henry Stewart, Lord Darnley, above the palace door. Today, guests flock to the castle to explore the various buildings and ancient artefacts displayed throughout. 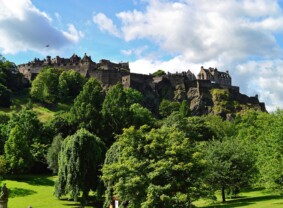 Experience one of the finest examples of French Renaissance architecture at the Château de Chambord. Boasting an impressive 440 rooms, 282 fireplaces, 84 staircases, and a decorative moat, the chateau is an exceptional site to explore. King François I was inspired by the works of Leonardo da Vinci and insisted that elements of the castle, such as its double helix staircase, should draw on the works of the Italian polymath. His intention had been to use the grand château as a weekend hunting retreat. However, in the end, the château was not considerable suitable as a long-term residence, and he only spent a few weeks there during his reign. 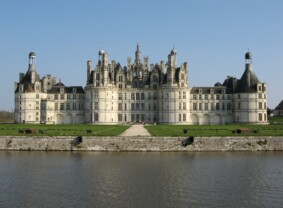 The Pena National Palace is eccentric and colourful, showcasing the flair of 19th century Romanticism in Portugal. Blending Middle Eastern and European Baroque styles, the palace was once the summer home of the Portuguese royal family. The interchanging vibrant hues which decorate the façade, and its various architectural styles, offer insight into the Portuguese monarchy, who reigned until the Revolution of 1910. Today, the palace is classified as a UNESCO World Heritage Site. 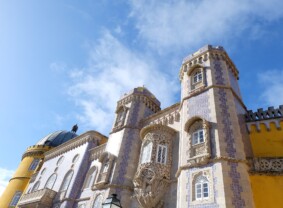 Although Europe is better known for its castles, Japan’s Himeji Castle is one of the most spectacular castles in the country and the world. There are few medieval castles still intact in Japan, and Himeji Castle is a prime example of its time. Considered a national treasure in Japan, the UNESCO Heritage Site’s elegant white façade has earned it the nickname, “White Heron Castle”, for its resemblance of a bird taking flight. Today, visitors can explore this outstanding complex and its breathtaking gardens. 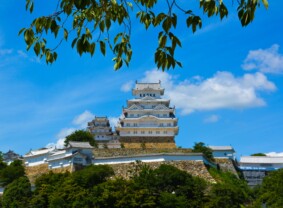 The stunning 14th century Palace of the Grand Master of the Knights of Rhodes is found at the end of the alluringly named Street of the Knights in Rhodes, Greece. This phenomenal structure is set on the site of a seventh-century Byzantine fortress and is one of the few examples of Gothic architecture in Greece. During the nineteenth century, the palace experienced devastating destruction to its interior because of an explosion. An Italian reconstruction was completed in the 1940s to repair the interior damage. 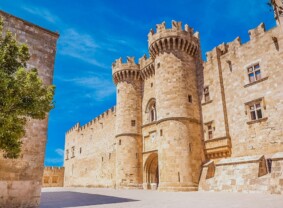 The city of Hillerød is home to the largest and arguably the most beautiful castle in Scandinavia. The Frederiksborg Palace stands on three islets of Slotssøen (Castle Lake). Built as a symbol of King Christian IV’s power as ruler of Denmark and Norway, the Renaissance castle was the official royal residence for more than 100 years before it was destroyed in a fire in 1859. Only the Chapel and the Audience Chamber survived the flames. A nationwide lottery and collection were held to raise funds to rebuild the palace, and in 1878 the palace became the Museum of National History in Denmark, showcasing an impressive collection of portraits, historical paintings, and the castle interior. 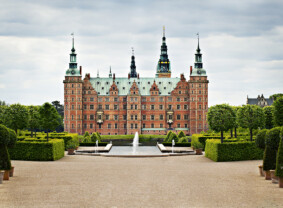 Castel del Monte is shrouded in mystery. Its construction was ordered by Emperor Frederik II in 1240 in a remote area of southern Italy – an area that offered no means of protection. Soon after it was built, the emperor abandoned the castle, leaving many questions surrounding his intentions for its construction. Celebrated as a masterpiece of medieval architecture, the fortress features an octagonal base and tower at each corner and eight trapezoidal rooms within. There has been speculation around whether the geometric layout might hold religious significance, specifically to the Holy Grail. The UNESCO World Heritage site has become one of southern Italy’s most visited landmarks. 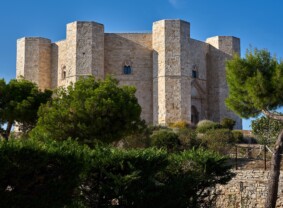 Bran Castle in Romania, also known as Dracula’s Castle, is one of the most famous castles in the world. The medieval fortress was built atop the mountain pass between Transylvania and Wallachia between 1377 and 1388. The castle was once thought to have served as the inspiration for the home of Bram Stoker’s fictional bloodthirsty Count Dracula, and although historians have now rejected this link, the castle still lures thousands of visitors each year on this premise. The castle has been surrounded by lore and mystery for centuries. When Transylvania became a part of Romania, the city’s government offered the castle to the reigning Queen Maria of Romania as a memento of appreciation for her efforts in unifying the two areas. The castle served as a royal residence until 1993, after which it was reopened as a museum. 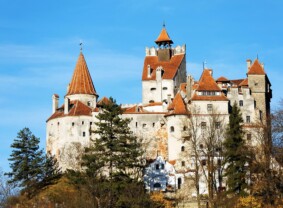 Located on a cliff 250 metres above the river Echaz, the Castle of Lichtenstein is one of Europe’s best examples of outstanding medieval architecture. Come for the castle and stay for the views. No matter the weather, the castle holds a certain allure. Cloudy days give the appearance the castle is floating above the clouds, while clear days offer complete views of the intricate and grandiose details of the castle. Although the castle is privately owned by a prestigious German family, visitors are welcome. 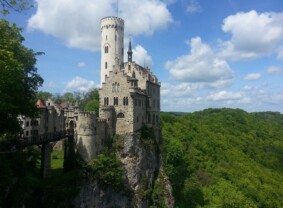 With colourful tales of lustful sultans, ambitious courtiers, captivating concubines and scheming eunuchs, the Topkapi Palace sounds like part of a George R.R. Martin plot. But in its heyday, between the fifteenth and nineteenth centuries, the court of the Ottoman Empire was an exciting place to be. For 400 years, Topkapi Palace was the epicenter of this great empire, and as therefore holds incredible historical, architectural and artistic value. Visitors can experience the palace's opulent pavilions, jewel-filled Treasury, courtyards and gardens, and the Harem. 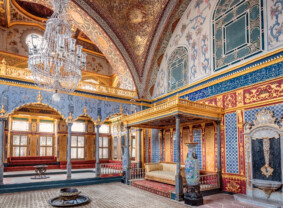 Although Cardiff and its surroundings are home to an abundance of castles, Cardiff Castle is the hands-down favourite for most who visit Wales. Built on foundations that date from the year 50 AD, and reconstructed in the 1800s, the castle remains in an almost perfect condition. The castle was built for the 3rd Marquis of Bute, who was reportedly the world’s richest man at the time (and had the extravagant taste to match). The castle features one of the most elaborate ceilings, the Arab Room Ceiling, along with over 2000 years of history. 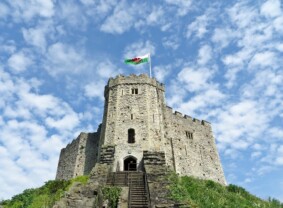 Initially the residence of the princes of Bohemia, and later the Royal Palace, Prague Castle has been an important symbol of the city for more than a thousand years. The castle is one of the largest and oldest castles in the world, with its construction having begun during the ninth century. Prague Castle is listed alongside the rest of the historic centre of Prague as a UNESCO World Heritage Site and spans a massive 750,000 square feet. With several churches, palaces, towers, halls, and other buildings within its grounds, the area feels like its own mini medieval metropolis; a city within a city. There are several vantage points around the castle grounds where you can get the amazing views of the city, especially at sunset. 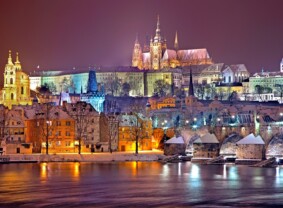 For more personalised information, tips and advice, or to include any of these incredible locations in your next holiday experience, contact your local TravelManagers’ personal travel manager here.