Europe’s Most Charming Small Towns to Visit in Summer

When it comes to charming small towns, Europe has plenty to offer. Explore the colours of Europe, from vibrant pastels in Italy to the traditional blue and white of Greece, learn the history behind the towns, and try the local delicacies. Leave the main cities and tourist destinations behind and discover a different side to Europe with our top 18 most charming small towns. 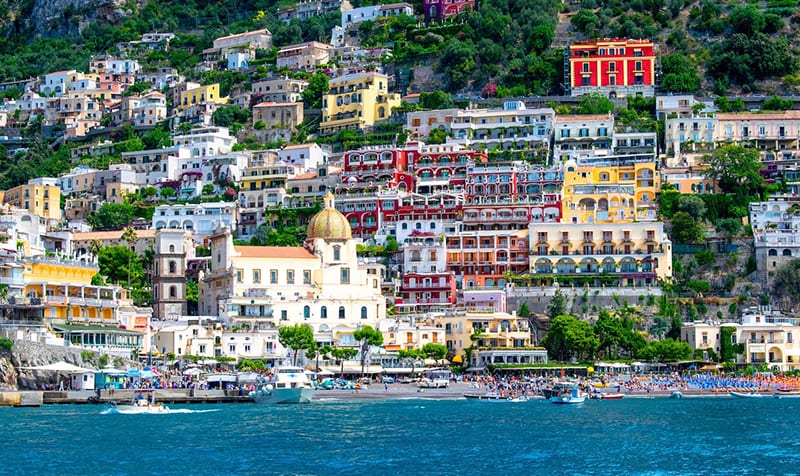 Known as the “Venice of the Netherlands”, this stunning village is the perfect city break. With no roads, you’ll enjoy the serenity of nature in Giethoorn. Explore by foot, bike or boat. Walk the over the canal bridges, take a bike ride along the many flower-lined paths, and float past the thatched-roof cottages. Picnic lovers will be in heaven with plenty of vibrant grassy patches to lay a picnic blanket down with some delicious food and bottle of bubbles. Although summer is stunning, if you fancy a winter break to Giethoorn, pack your skates. The canals freeze over in winter and provide the perfect opportunity for some outdoor ice skating. 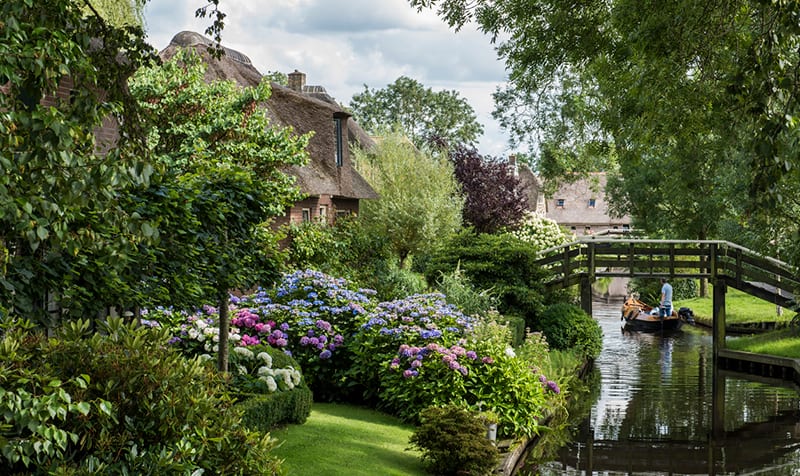 The flower-lined canal of the picturesque town of Giethoorn

Austria is one of the most picturesque places in Europe, and the Austrian town of Hallstatt is like something out of a fairy tale. The UNESCO World Heritage-listed town is set between a pristine lake and breath-taking mountains. Hallstatt is just a one-hour drive from Salzburg, or three hours from Vienna – take a day trip or spend a few days relaxing here. Explore the town’s churches, which date back to the 12th century, sample the cosy restaurants and enjoy the charm of the town’s market square. Be sure to head out on the lake ferry to take in the dramatic views of the town from a difference perspective.. 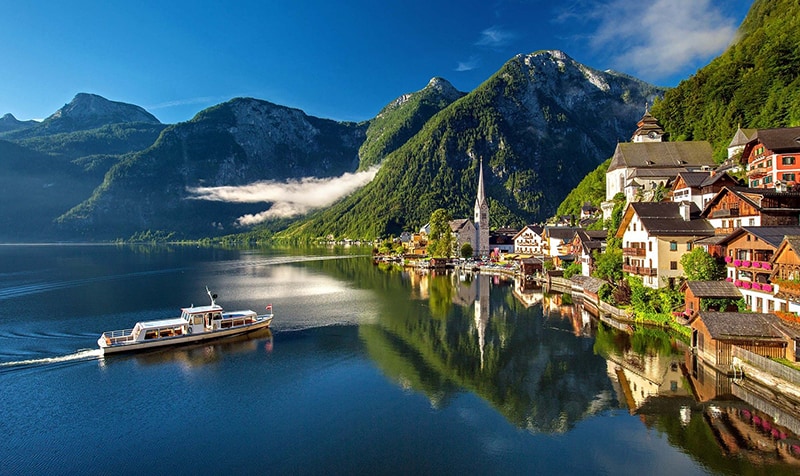 Hallstatt is a stunning UNESCO World Heritage town in Austria

Lech might be better known as a fashionable ski resort, but summer here is sublime. This old farming village is set high in a valley, with rolling hills, blooming pastures and a glistening mountain lakes. There are plenty of biking or hiking options, including the hike known as the Green Ring. The Green Ring is a three-day hike that takes you from Lech to Zürs and Zug. The journey will see you pass geological sites, forests, and carved sculptures. One of the most scenic biking trails is around Spullersee Lake on the top of a mountain. The 25-kilometre ride is long but well worth the views and experience. It’s not all bike riding and hikes though – there are wellness retreats in the area if you prefer to relax. 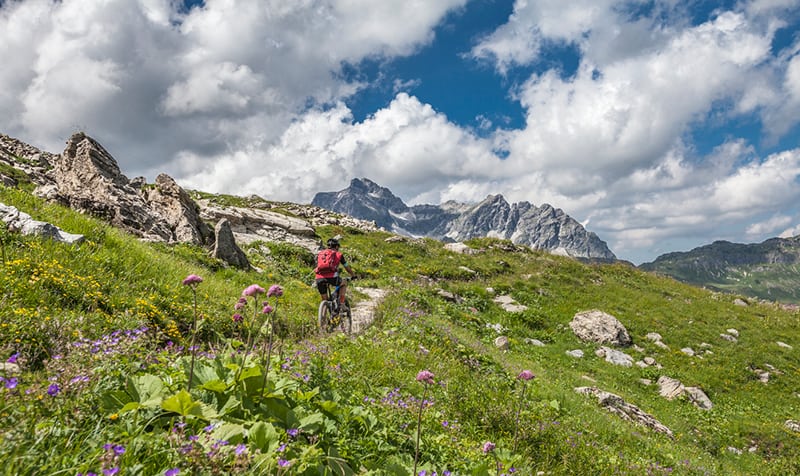 Take a scenic ride through the surrounding region of Lech, Austria

Hvar is well-known in Croatia for its beautiful setting, elegant restaurants and chic hotels. Explore the town’s Gothic palaces and marble stone streets, visit the lavender fields and lush vineyards, and relax on the sunny beaches. If charm alone isn’t enough to tempt you, take it from Prince Harry, George Clooney and Beyoncé: this is the place to holiday. For those with a personal or hired private yacht, Hvar is an excellent base from which to explore some of the nearby islands. 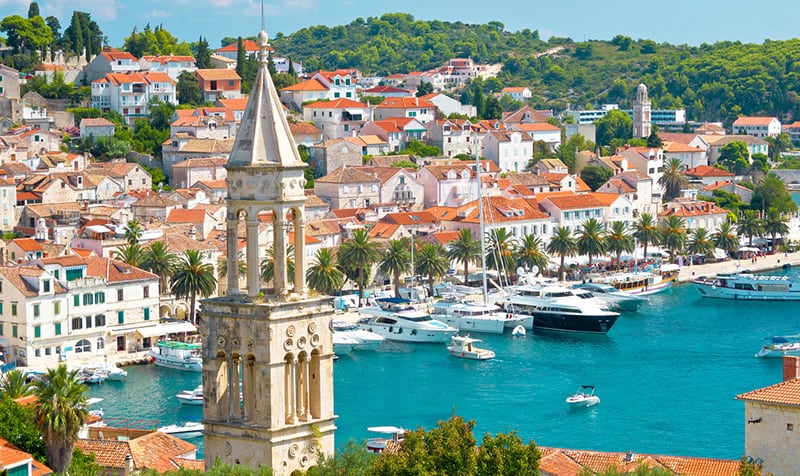 Amazing view of the Hvar harbour on Croatia’s Dalmatian Coast

North of the stunning Myrtos beach lays the tiny and secluded village of Assos. This peaceful village is a holiday retreat like no other. The horseshoe-shaped bay is surrounded by the striking, azure Ionian Sea on three sides, luscious green scenery and verdant forests. Assos is a town lost in time. A haven of old-school Greek charm, you can explore the traditional Ionian architecture, the pebble beach and the marina restaurants. The Venetian army built a castle stronghold in Assos in the late 15th century, and although today there are only remnants of the castle left, it is still a spectacular site to explore. 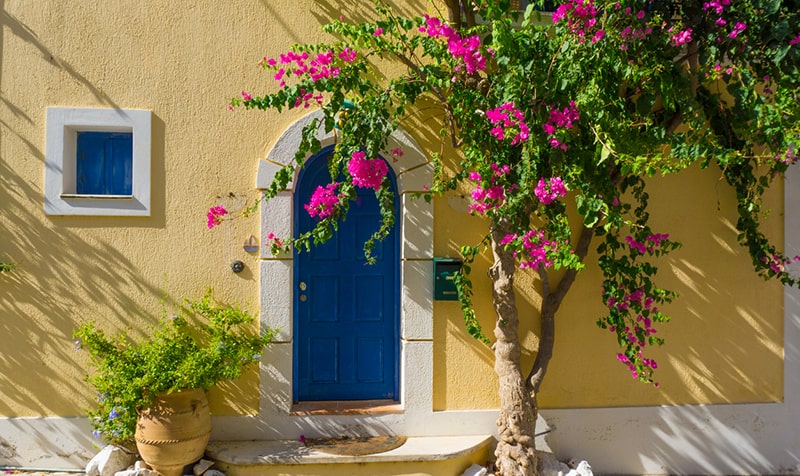 The city of Prague is well known for its beautiful old town centre, but if you want to venture beyond the Czech Republic’s charming capital, head to Cesky Krumlov. Wander the cobblestone roads of this storybook town in Bohemia’s deep south, where the old town square, and its renaissance and baroque architecture (not to mention a magnificent castle), are waiting to be explored. It’s not all old-world charm: there are numerous bars and restaurants to be enjoyed too. 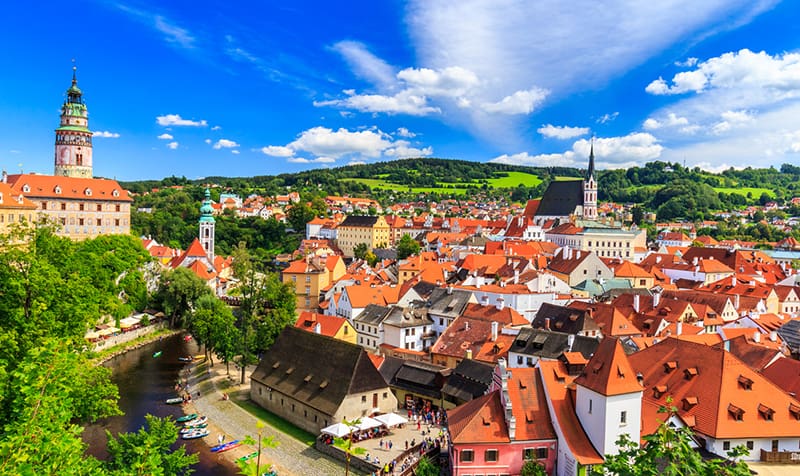 Although most of Slovenia is landlocked, there is tiny sliver of land that stretches out to the Adriatic Sea which is known as the Slovenian Istria. There are three small coastal towns, one of which is Piran. The colourful main square, medieval walls, bustling harbour, and exceptional seaside restaurants make this a great holiday destination. Climb the 146 steps of the bell tower to a 360-degree view over Piran, Slovenian Istria, Italy, and Croatia. 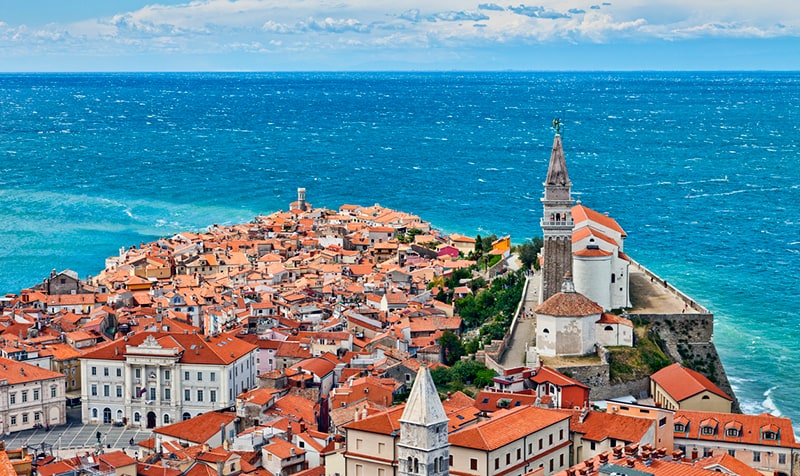 A view of Piran, Slovenia

This small, alpine town is located in the north-west of Slovenia, and its biggest draw card is Lake Bled. Arguably one of the most romantic lakes in Europe, the pristine glacial blue waters of Lake Bled surround a tiny island which houses a small Baroque church. You can stroll around the lake (it’ll take two hours but the serenity is worth it) or take a boat ride to enjoy the panoramic views. Hike to the medieval hilltop castle and breathe the freshest air. 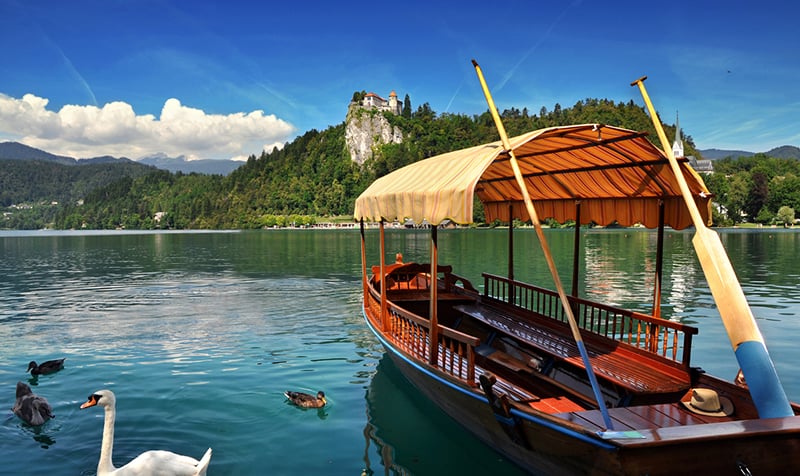 Traditional Pletna boat on Lake Bled with swans and ducks

Located in the northeast corner of France’s Alsace region, Colmar blends the very best of French and German culture and charm. The colourful German Gothic and French Neo-Baroque architectural styles exude medieval charm and look great on camera. Wine lovers are in for a treat here. The Alsace region is well-known for its crisp white wines so be sure to leave room in your suitcase to take a bottle or two of local wine back home with you. When you’re not drinking wine or taking photos of the colourful buildings, you can explore the old town, wander the cobblestone lanes and bridged canals, and visit its magnificent churches and museums. 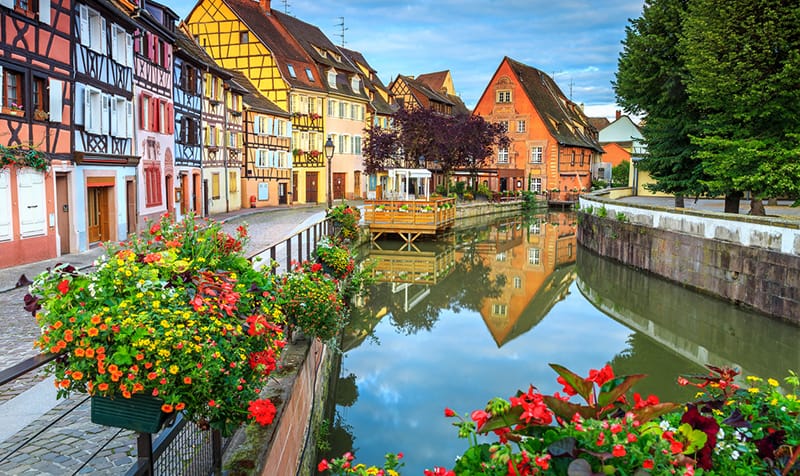 The traditional, brightly coloured houses on the River Lauch in Colmar, France

The town that inspired one of the world’s greatest artists, it’s easy to see why Van Gogh was so taken with Arles. Situated in the south of France, Arles was home to more than 30,000 people in Roman times, and the remnants of that Roman influence can still be seen today – it even has its own amphitheatre, modelled after Rome’s Colosseum. Shopping at the weekly Saturday market is a must. For those keen to explore the Camargue and its local wildlife, including the famous Camargue horses and flamingos, Arles is a great base. 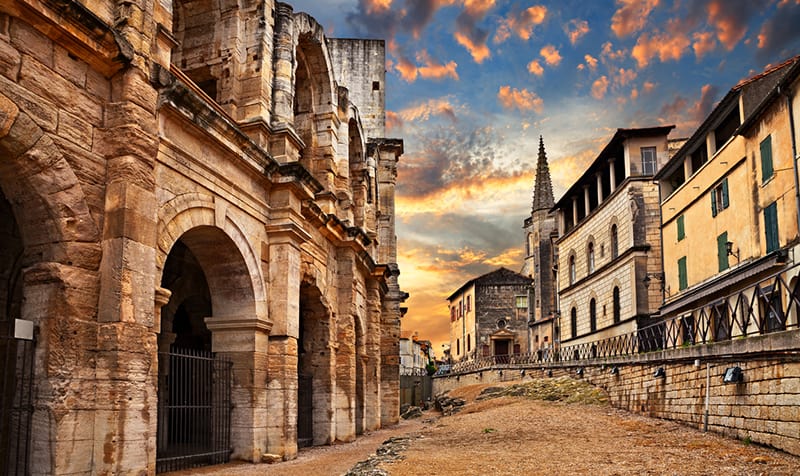 The walls of the ancient Roman Arena in Arles

Leave the city behind and head for Sintra. The green mountainscape of palaces, country estates, parks and a medieval castle will have you feeling like you’ve stepped into another world. Situated within the hills of the Serra de Sintra, this UNESCO World Heritage site is all charm – even Lord Byron thought so. Sintra inspired his epic poem Childe Harold’s Pilgrimage: ‘Lo! Cintra’s glorious Eden intervenes, in variegated maze of mount and glen’. Visiting Sintra can easily be done as a day trip from Lisbon, but with Quinta da Regaleira, Pena Palace and all the other treasures of the area to explore, you could easily spend several days there. 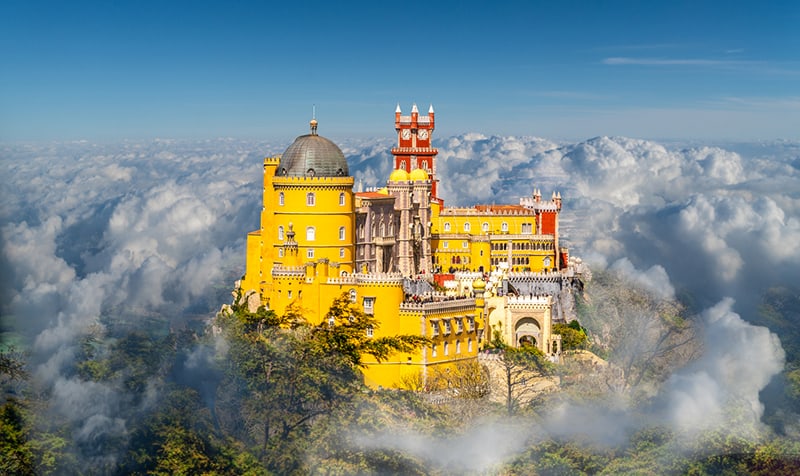 Time means nothing in Óbidos. The moment you enter this town, everything stops. This slice of medieval Iberia has been preserved within its crenelated walls. In the 13th century, Queen Isabel was so enchanted by the town that her husband, King Dinis, gave it to her as a gift. The town is adorned with bougainvillea, and the cobblestoned walkways and vivid yellow and blue painted houses are sensational. Try the ginjinha, a local liquor made with sour cherries, at one of the bars. 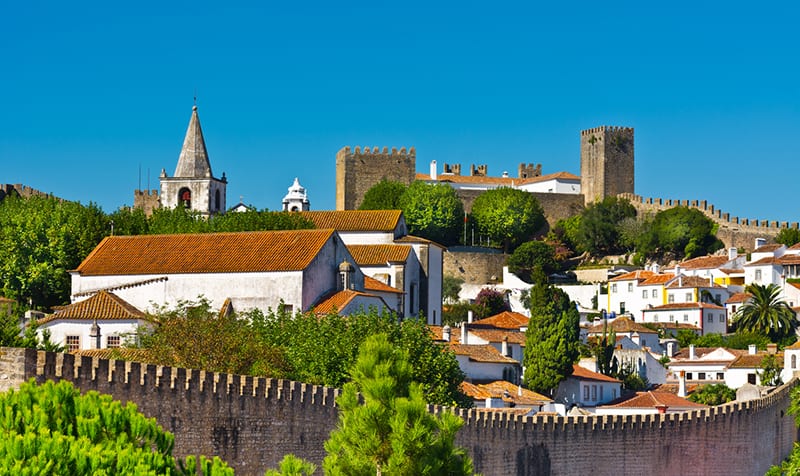 View of the historic city centre of Obidos, Portugal

While many people immediately think of France, Italy or Greece when they think Europe, Romania is a country not to be overlooked. And when it comes to which Romanian town to explore, look no further than the magical Brasov. This quaint town is charming, with bohemian cafes, and baroque buildings and churches, plus it’s the gateway to Transylvania’s castle region. 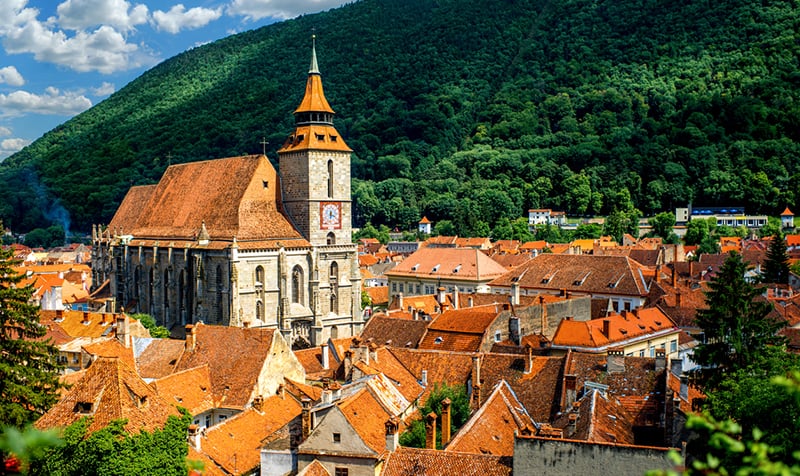 Probably the best kept secret and one of the oldest cities in Belgium, Ghent is a must. Small, cosy and vibrant, the town offers medieval architecture and cultural charm. This quiet city is actually the largest of the Flanders’ region, with a fairytale setting, great food, and a long history dating back to the seventh century. Explore the museums, music scene and architecture of the city and be sure to take a boat ride down the canal. 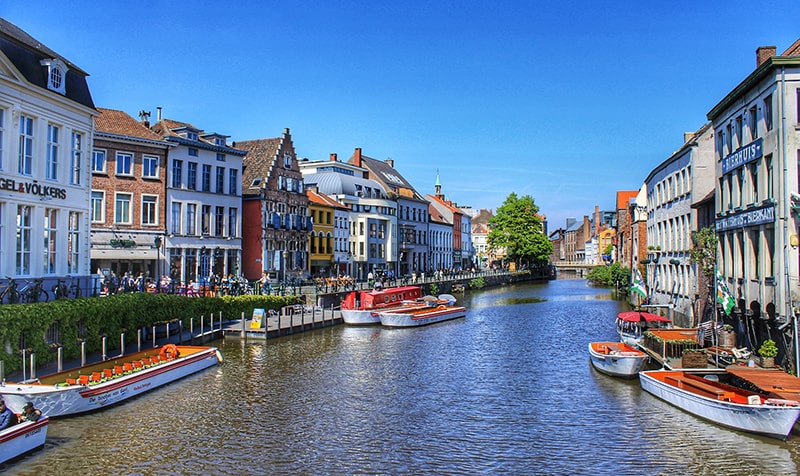 Boats along the canal in Ghent, Belgium

Positano: the name alone inspires beauty, colour and the very best of Italian culture. Positano is certainly not a secret, but this coastal town is everything one could want in a stylish, small-town getaway. Carved into the craggy shoreline, the town is comprised of narrow alleyways, colourful brick houses and mosaic-tiled domes. Browse the boutiques and museums, take a yacht ride or relax on the beach: whatever you do in Positano is sure to be divine. 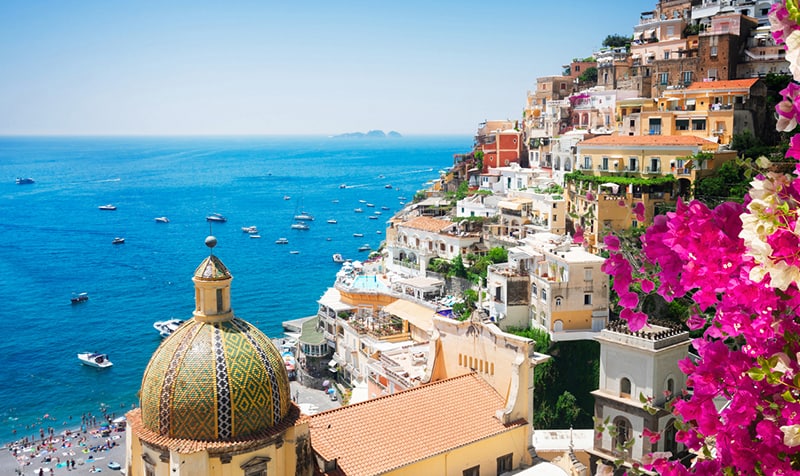 A different view lies around every corner in Positano

Considered one of Italy’s loveliest towns, is the definition of ‘good things coming in small packages’. It’s impossible to get lost, but it’s fun to try. This medley of pastel coloured buildings occupies the easternmost tip of the Golfo dei Poeti, which is named for the poets and other literary icons, such as Lord Byron and D. H. Lawrence, who have sought inspiration in its stunning northern Italian setting, on the shores of the Mediterranean. 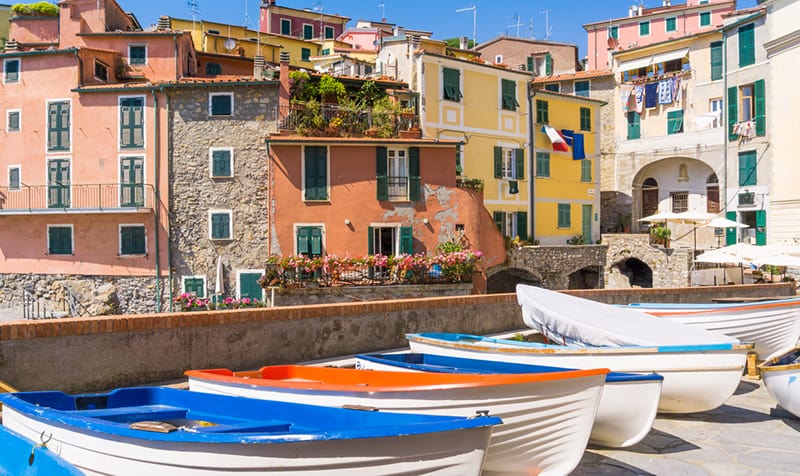 The Tellaro scenery which has inspired visiting poets for centuries

Take the winding mountain road that leads to the remote alpine village of Guarda in the rugged region in eastern Switzerland, and you will find paradise. In winter the surrounding region is known for its exclusive ski resort, St. Moritz. But in summer, hiking is a-foot. With mountain peaks, meadows, picturesque houses and quiet lanes, this scenic landscape offers tranquil beauty. 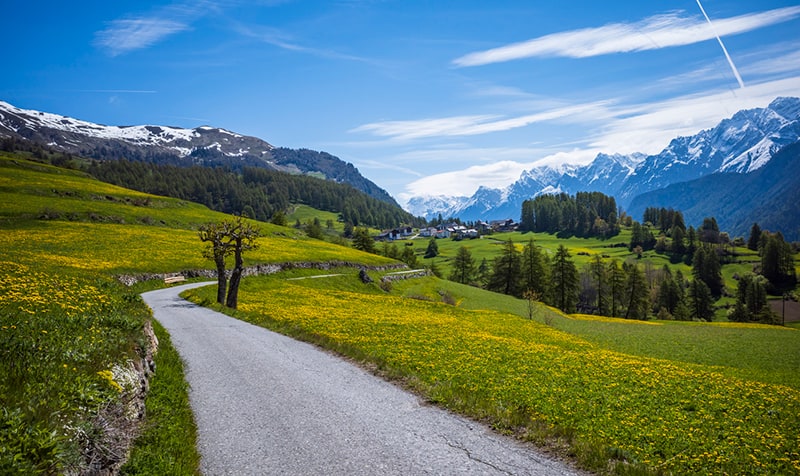 Mountains and meadows of Guarda, Switzerland

Visby is Scandinavia’s best-preserved medieval town, and a photogenic one at that. Get lost among its wildflowers, pastel architecture and winding cobbled lanes. The town, on the island of Gotland, is recognised as a UNESCO World Heritage Site and radiates beauty. The Gothic churches and 12th-century ramparts are clues to the history of the area. If you time it right, you can enjoy Medieval Week, with people parading around as knights, queens, and peasants, while dining, drinking and dancing. 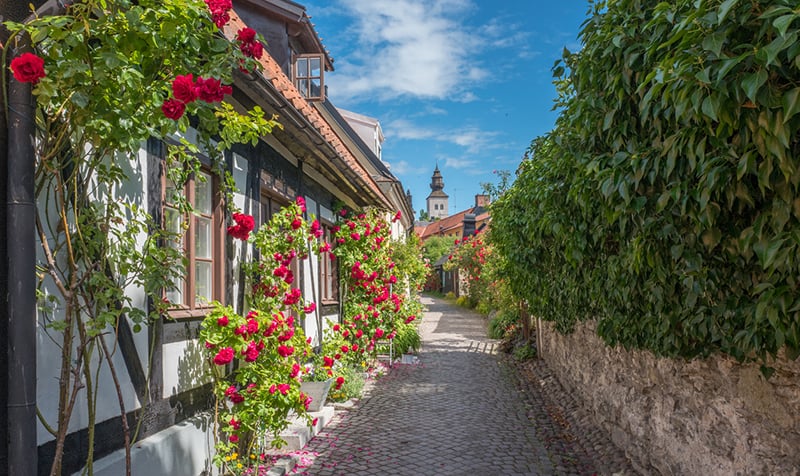 A medieval alley in the historic Hanse town Visby, Sweden