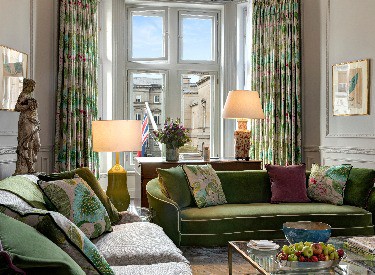 If you’re heading to Edinburgh’s Waverley Station and you stare up at the magnificent building on the south side of Princes Street and you’re fastidious about punctuality, take a deep breath. The looming clock tower is wrong. Ever since 1902, the clock on what was once known as the North British Station Hotel was set three minutes fast so passing travellers wouldn’t miss their trains. There is one exception. Every year on Hogmanay (the Scots word for the last day of the year), the clock is set to the right time as art of New Year celebrations. This consideration for travellers continues inside the magnificent building now known as the Balmoral Hotel and run by Rocco Forte Hotels. 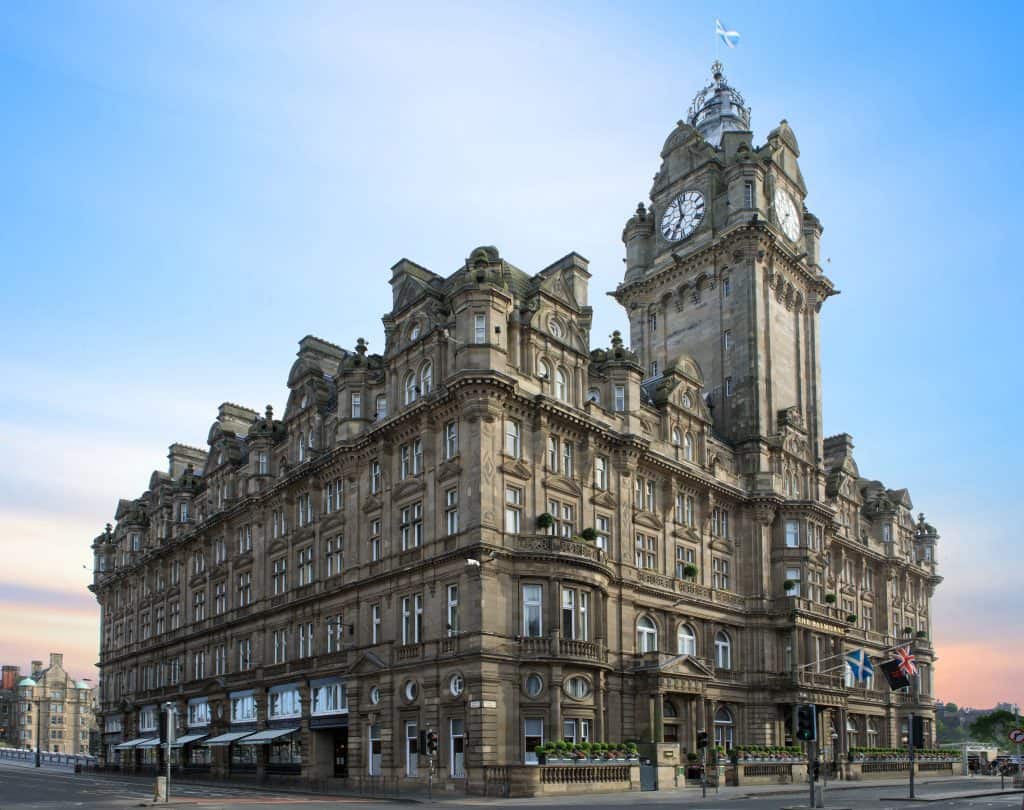 Die-hard Harry Potter fans will love room 552, the suite where JK Rowling chose to stay in 2007 while she finished off The Deathly Hallows. Welcoming you at the door is an owl figurine signifying that you are about to enter the world of one of our most creative writers of the century. Inside you will find an expression of Rowling’s joy at completing the book – a signed and dated antique marble bust. At the opposite side of the room you will find the desk where JK Rowling wrote for six months to finish the book. Of course, there is a framed cover of Harry Potter and the Deathly Hollows and a photo of the signature she left on the marble bust. Rowling said she chose the Balmoral because there “came a day where the window cleaner came, the kids were at home, the dogs were barking and I could not work and this light bulb went on over my head and I thought, I can throw money at this problem. I can now solve this problem…I thought I can go to a quiet place so I came to this hotel because it’s a beautiful hotel… and I ended up finishing the last of the Harry Potter books in this hotel.” 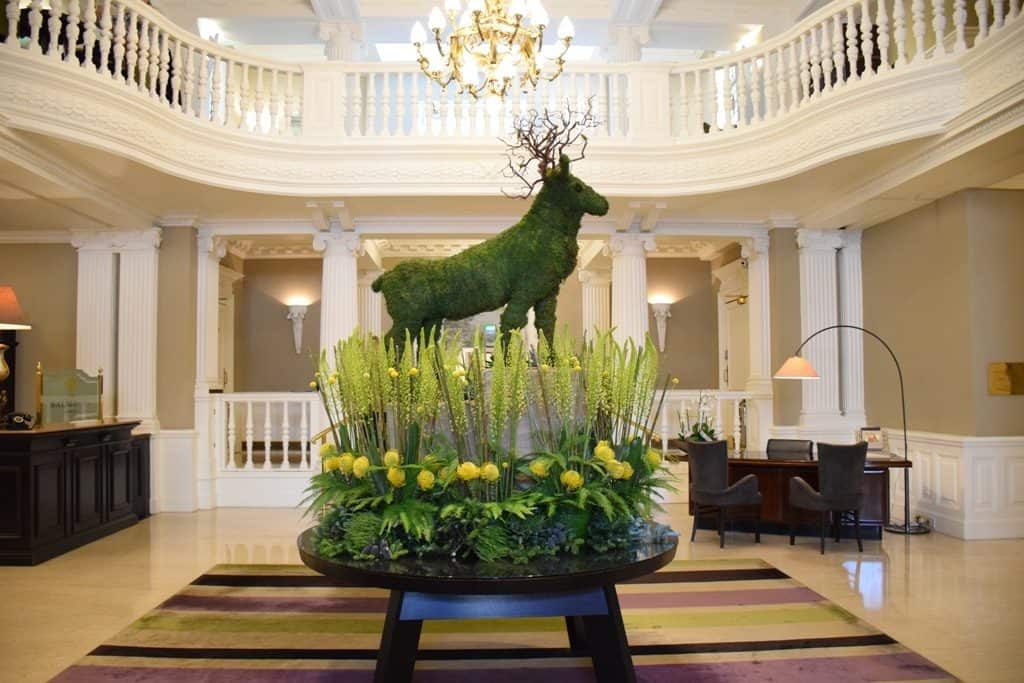 Rowling is among many celebrated personages who chose to stay at the hotel including Sir Sean Connery, who has a plaque to commemorating the occasion in the lobby, as well as Laurel and Hardy, Sophia Loren, Elizabeth Taylor, Paul and Linda McCartney, Prime Minister Harold Wilson, and the Queen Mother – who liked to dine on plain roast lamb for lunch in the hotel’s restaurant.

What is it about this hotel that the rich and famous choose to make it home for a night or six months? The reasons mount up beginning with the sublime views of Edinburgh Castle. Then there is the Michelin starred Number One restaurant reflecting an old school glamour with walls of red, curved banquettes and tables which are well spaced; the famed afternoon tea at Palm Court to the dome-ceilinged Palm Court tearoom (complete with palm trees, murals and a harpist on the balcony) and the impressive list of around 500 Scotch whiskies from every distillery in Scotland at the tweedy bar, aptly named, ‘Scotch’. 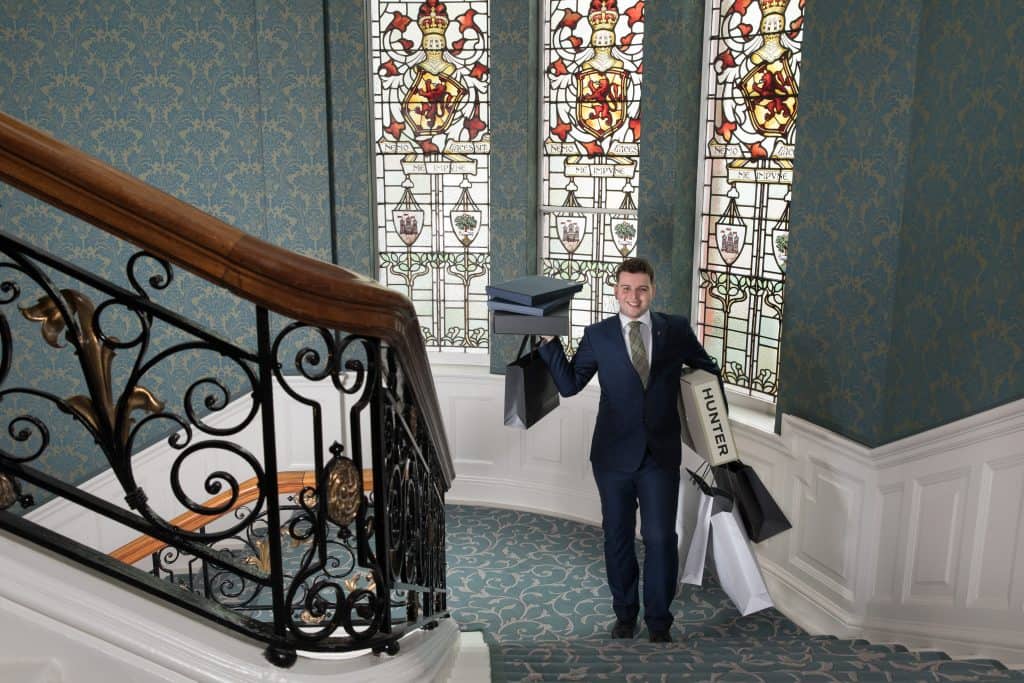 The Balmoral journey begins when you are met at the airport or the station by a Scotsman in full traditional dress, an extension of the proud Scottish heritage of the hotel. The hotel even has its own tartan which was inspired by the Edinburgh landscape. This inspiration continues throughout the hotel with rooms decorated in the tones of the moors, mists and heathers of Scotland. Natural fabrics are used including linens and silks to complement the Scottish themed artworks. Wallpaper depicts foliage and tables feature bronzed legs which appear as branches. The detail of care in the aesthetics of the hotel extends to Isle of Mill fabrics, Timorous Beasties cushions, handmade beds by the Queen’s supplier, Glencraft and the blanket placed on every bed, designed by Johnston’s of Elgin.

The rooms offer everything a tired traveller could want including a Nespresso coffee maker, Scottish tea, a comfy dressing gown and slippers in two sizes. Staff are there to help and address you by name. Then there’s the spa, a 15-metre lap pool, sauna, steam room and gym. Think it might just be time to finish my novel. See you in six months.

For more personalised information tips and advice, or to book an incredible holiday contact your local TravelManagers’ personal travel manager.

With compliments of First Class: visit them online or at Instagram.