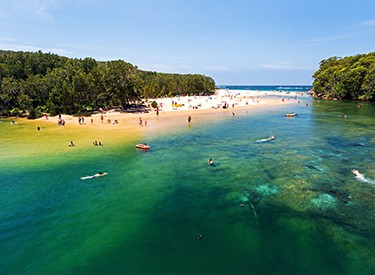 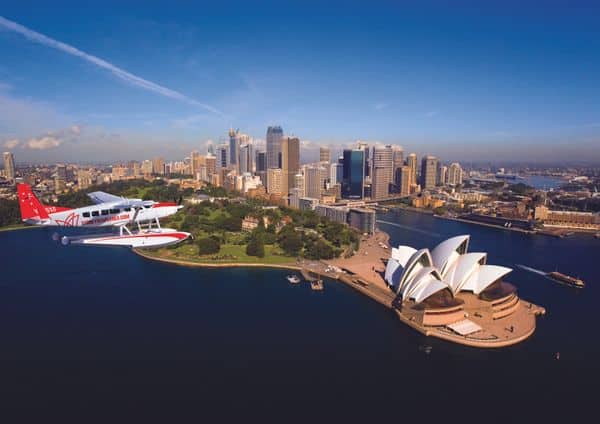 If you want to romance a Sydneysider, you’ll need to do something pretty special in this harbour city. A seaplane date is the ultimate for budding young lovers. Glancing down at the never-ending blue is quite the start, before landing at a secluded restaurant where lunch awaits.

Go above and beyond

The exclusive Marramarra Lodge is as mesmerising as the Hawkesbury River surrounding it. Sydney Seaplanes can fly you north from Rose Bay over the enchanting waterway before landing and floating to the waterfront ‘doorstep’ of this luxury retreat.

Under a canopy of towering eucalypts, the lodge provides an authentic Australian bush experience, with accommodation in Peninsula Tents featuring large riverstone bathrooms, air-conditioning and decks with river views.

Former chef to royalty Paul Macnish creates gourmet meals at Budyari Restaurant, and the luxe experience continues with a tour to a nearby pearl farm, pampering at the lodge’s Iyora Day Spa and the opportunity to forage for bush tucker and explore rock carvings with a local Aboriginal Elder.

One way to beat Sydney’s traffic is to fly over it. For an unforgettable experience in the Hunter Valley, Sydney by Seaplane flies north from Sydney to Cessnock in an hour for an exquisite day in this world-famous wine area.

Take off from Rose Bay and enjoy a bird’s-eye view of Sydney Harbour, the Northern Beaches and the Central Coast before landing in Cessnock to visit Piggs Peake Winery.

Savour ‘unique boutique’ wines at the cellar door and then it’s time for lunch in Pokolbin at Yellow Billy Restaurant. The day ends with a spectacular figure-eight flight in front of the Sydney Harbour Bridge and Sydney Opera House.

Land in style for lunch 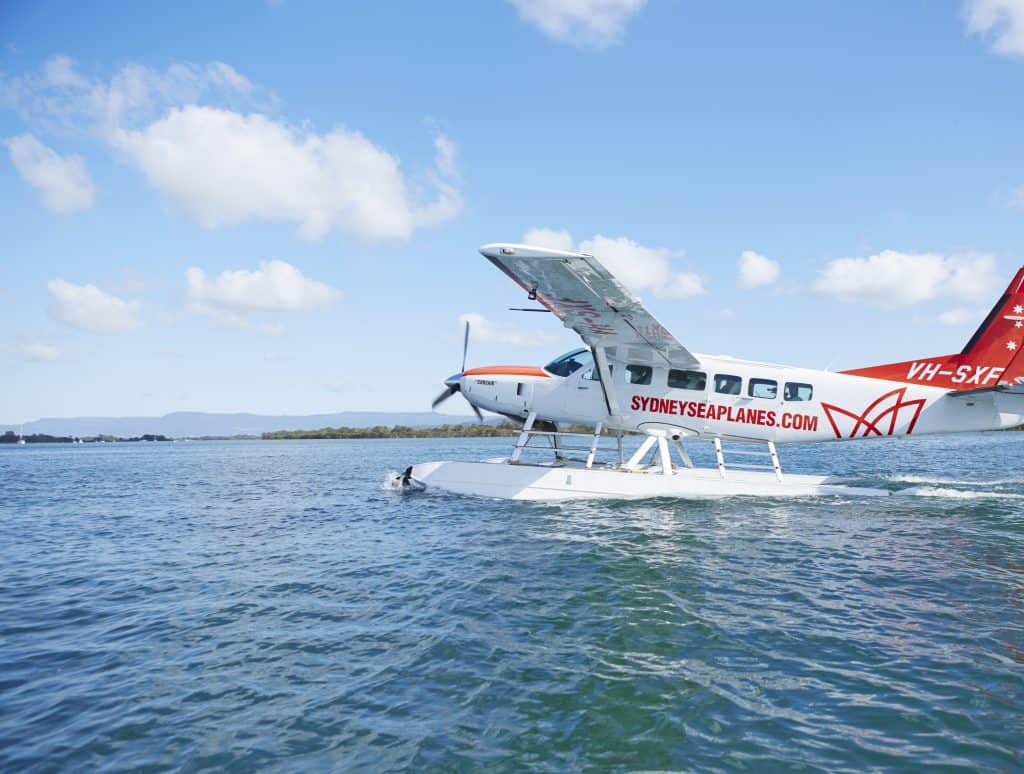 Cottage Point Inn, which is hidden away in the rugged Ku-ring-gai Chase National Park, is one of the most charming restaurants in Sydney, and a front-of-house ‘splash down’ arrival with Sydney by Seaplane guarantees a head-turning entrance. From humble beginnings in the 1950s as a boathouse, general store and post office for the Hawkesbury River community, the inn is now a fine-dining destination.

Taking in the view of the passing river traffic is like watching a magical slow-motion film, and be sure to look skyward to see magnificent sea eagles soar high on their daily patrols. As the final flourish, the Sydney by Seaplane flight home ends with a fly-by of the Sydney Harbour Bridge and Sydney Opera House. 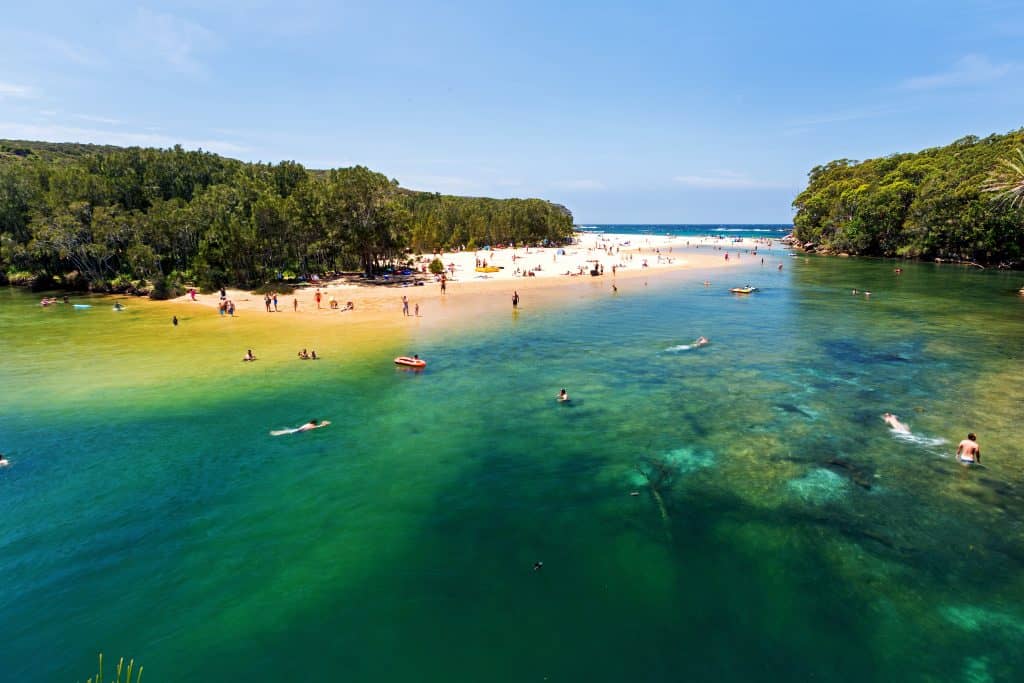 Hidden within Sydney Harbour, tucked away in national parks and along Sydney’s glorious coastline, you’ll find an abundance of secret beaches. With amazing views and soft sands just-right for relaxing and picnicking, seek out these Sydney beaches that are secluded, private and worth the adventure to find.

The short, paved walk from the better-known Congwong Beach takes you to a secluded stretch of sand in the La Perouse section of Kamay Botany Bay National Park, a 30-minute drive south of the city centre. The calm water at this little beach makes it great for a snorkel or paddling with kids. Surrounded by lush vegetation, the cove feels miles away from the city, although there’s also easy access from a nearby road if you don’t want to walk from Congwong Beach, and there is plenty of parking nearby. Bring a beach umbrella, though, as there is limited shade. Little Congwong was previously an unofficial clothing-optional beach, although this is now discouraged. 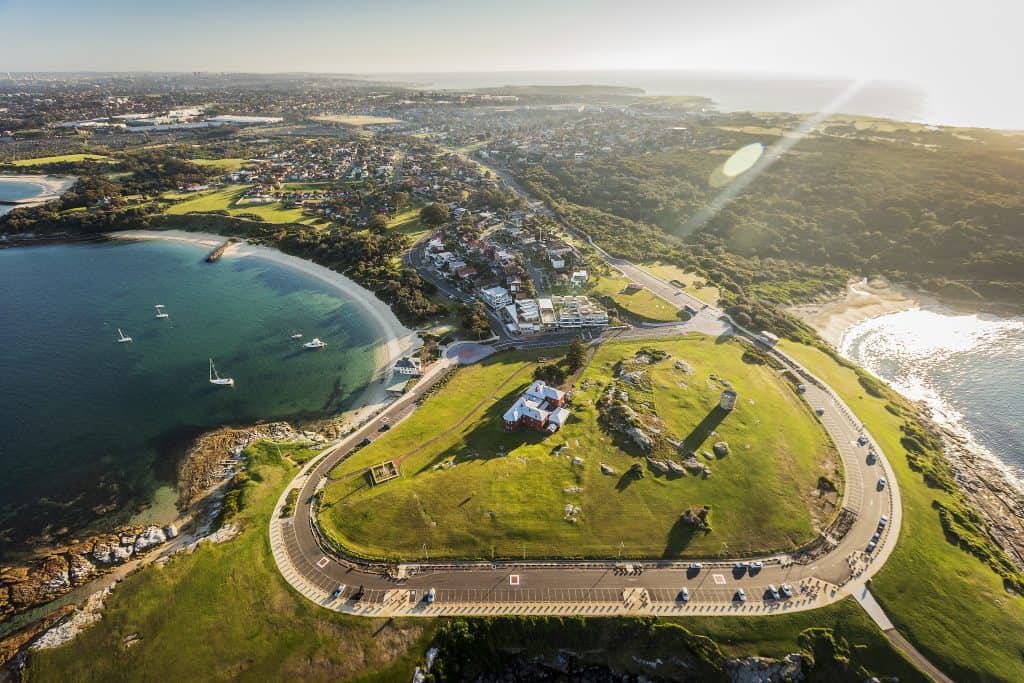 Combine a swim with a bush walk at Oatley Park, a 30-minute drive from the city centre in the leafy southern suburb of Oatley, near Hurstville. Here the 45-hectare bushland reserve hums with cockatoos and other birds drawn to the native flowers and trees, while the paved and unpaved walks through the bush offer lovely views of the Georges River. Head to Oatley Park Castle, a quirky sandstone lookout (complete with a solid sandstone parapet) built during the Great Depression, and you’ll see a sandy beach through the trees. This is Oatley Baths, a 200-metre-long netted swimming enclosure with change rooms and picnic tables. Swim a few long laps of the enclosure, or simply laze on the pontoon and watch the cockatoos fly overhead. 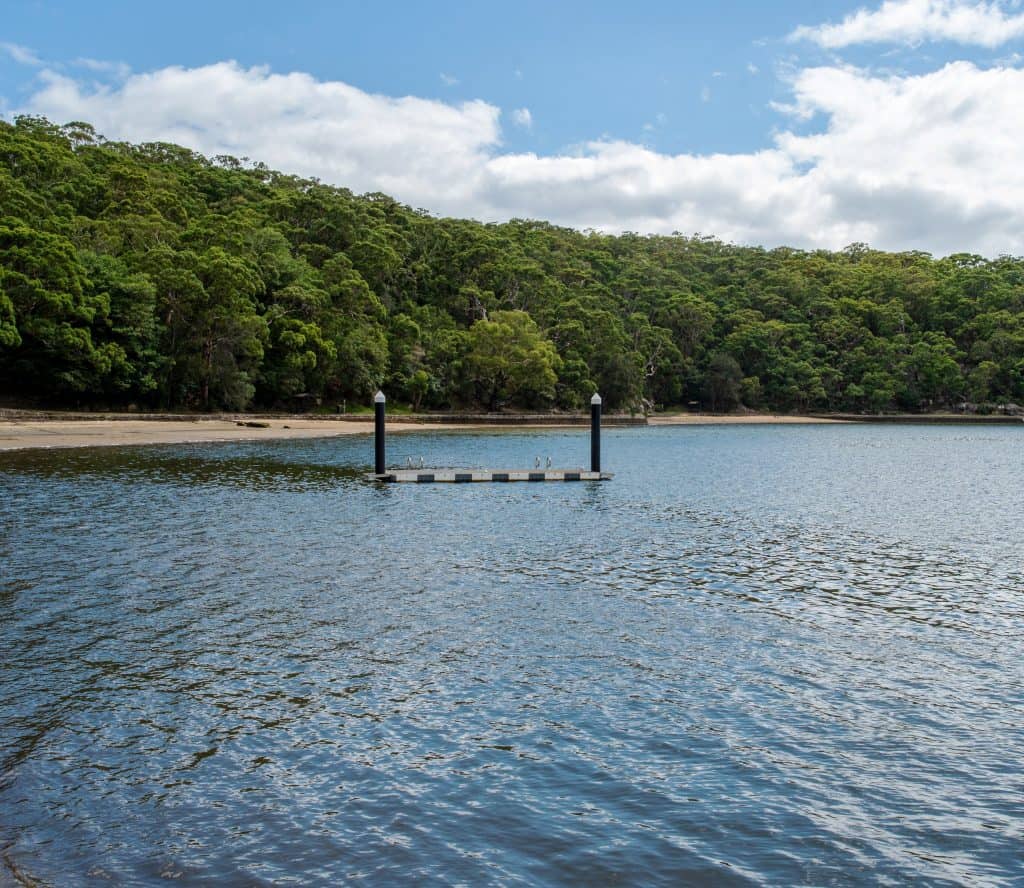 The river beach at Oatley Baths, in the southern Sydney suburb of Oatley. Image courtesy Mark Sariban and Destination NSW

Four famous surf beaches make up the long stretch of sand at Cronulla, a 50-minute drive south of central Sydney. But just a 10-minute walk from the café and shopping strip at the heart of this laid-back suburb you’ll find two calm estuary beaches on Gunnamatta Bay, on the Port Hacking River side of the Cronulla peninsula. Both beaches boast plenty of shade, particularly in the morning, and the only waves are generated by passing boats, making them ideal for families with young children.

At Gunnamatta Park you can swim in the bay or the netted tidal pool, enclosed by a picturesque wooden jetty. There’s a playground in the park, as well as toilets and change rooms. A couple of minutes’ drive further south, you’ll find an even more secluded beach at Darook Park. Here trees line the narrow strip of sand, casting shade right over the water in the morning, so you can minimise your sun exposure while still having a leisurely dip.

There are some great little beaches in the Royal National Park, an hour’s drive south of Sydney. Garie and Wattamolla beaches are the most accessible, but there are plenty of others to seek out, including Burning Palms Beach. Park at Garie Beach and walk south along the Coast Track, past North and South Era beaches, or brave the steep 20-minute walk from Garawarra Farm car park. The northern end of the beach’s headland is dotted with historic beach shacks, built by miners from nearby Helensburgh in the 1930s. Note that the surf can be strong and the beach is not always patrolled. 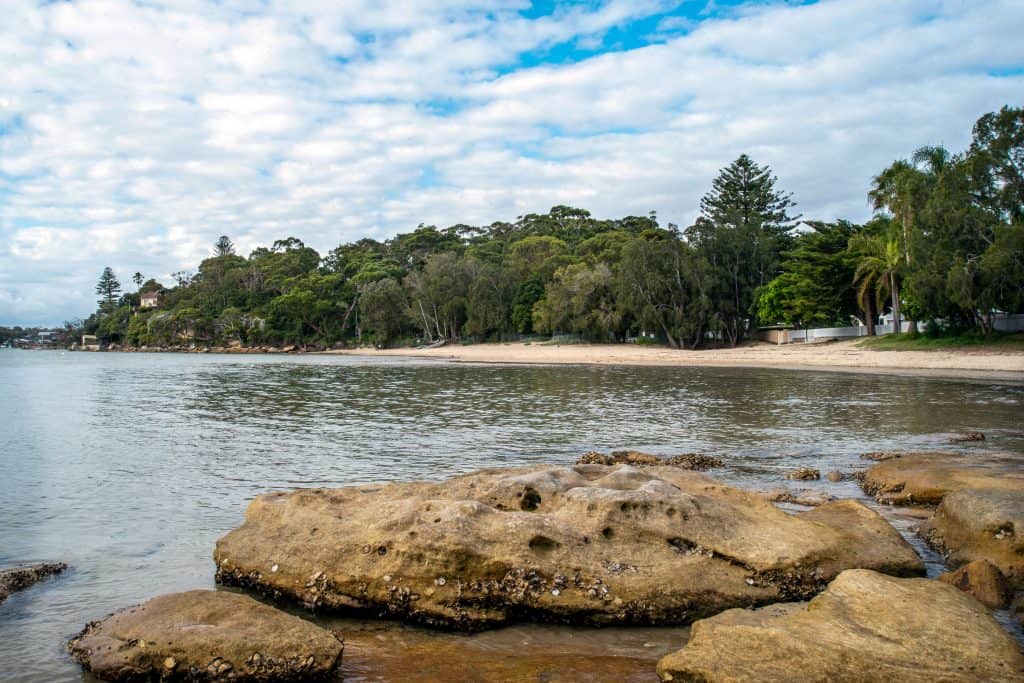 There’s a beach on the harbour side of Manly‘s protected North Head that’s so secluded it’s only accessible by water. Store Beach was originally the site where ships would unload provisions for Sydney’s old Quarantine Station, which was used to isolate arriving passengers suspected of carrying infectious diseases. Now part of Sydney Harbour National Park, the quarantine buildings have been transformed into the Q Station boutique accommodation.

You can reach Store Beach via a challenging rock hop at low tide from nearby Collins Flat Beach, but most people make their way here by boat. Hire a kayak from Manly Kayak Centre and paddle your way there in about 20 minutes. Keep an eye out for little penguins, which use the reserve as a breeding ground.

Turimetta Beach, a 30-minute drive from Manly on Sydney’s Northern Beaches, is so secret it disappears at high tide. Low tide exposes a small stretch of sand, interesting rock formations and carvings. It’s bordered by Turimetta Head to the north and Narrabeen Head to the south, with access from the Bicentennial Coastal Walk or via the rock platform from Narrabeen Beach. Backed by steep cliffs, the beach is popular with surfers. It’s not patrolled, and the surf is strong, but the south end’s large, flat rocks and rock pools are great for kids to explore.

Deep in the heart of Ku-ring-gai Chase National Park, a 45-minute drive north of the city centre, the secluded, beautiful Resolute Beach is your reward for a steep walk along the Resolute Track. Resolute’s calm, clear water, densely forested fringes and views out to Pittwater and Barrenjoey Headland make it an idyllic spot you may have all to yourself.

The Resolute Track, which starts at the Resolute Picnic Area, passes through bushland and the famous Red Hands Cave with its Aboriginal handprints. You can also take a detour down some steep stairs to West Head Beach, which is just as secluded as Resolute, but more rocky.