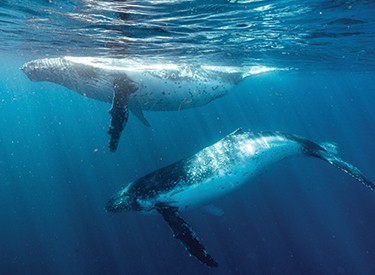 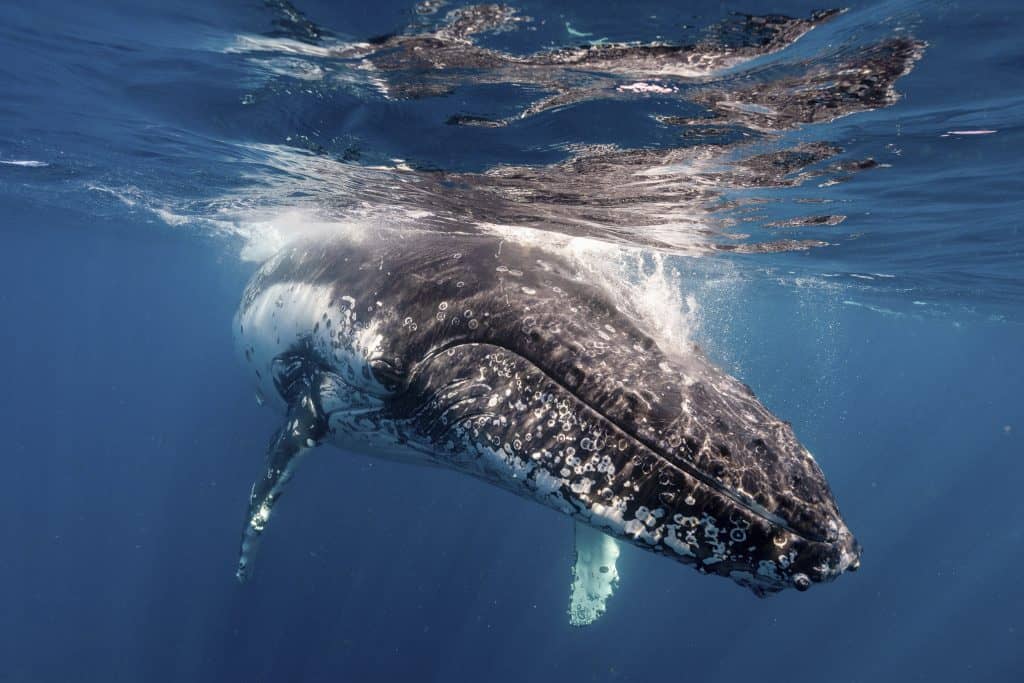 From May to November, thousands of whales migrate along the New South Wales coast as they make their way from Antarctica to the South Pacific and back again. From Tweed Heads to Sydney and all the way to Eden, New South Wales offers a multitude of sea and land-based options to observe the traffic on the ‘Humpback Highway’. Here are the top spots to see the ocean’s gentle giants:

Sydney is well-regarded as a whale-watching hub — there are vantage points all along the city’s coastline. Visit Barrenjoey Headland at Palm Beach, where the whales wave farewell before continuing up the coast or explore North Head in Manly and watch for the tell-tale burst of spray in the water down below. On the other side of Harbour, keep your eyes peeled for whales as you walk the South Head Heritage Trail in Watsons Bay or head further south to Kamay Botany Bay National Park’s Cape Solander, a top whale-watching spot with informational signs about the migration.

For on-the-water experiences, Whale Watching Sydney, FantaSea Cruising, Sydney Princess Cruises and Manly Ocean Adventures are just some of the whale-watching cruise boats that leave from Circular Quay, Darling Harbour and Manly. Jump aboard one of these cruises and you might see humpback, southern right, minke, Bryde’s, blue and orca whales. The giants of the deep cruise close to the coast and have even been known to pop up inside Sydney Harbour. 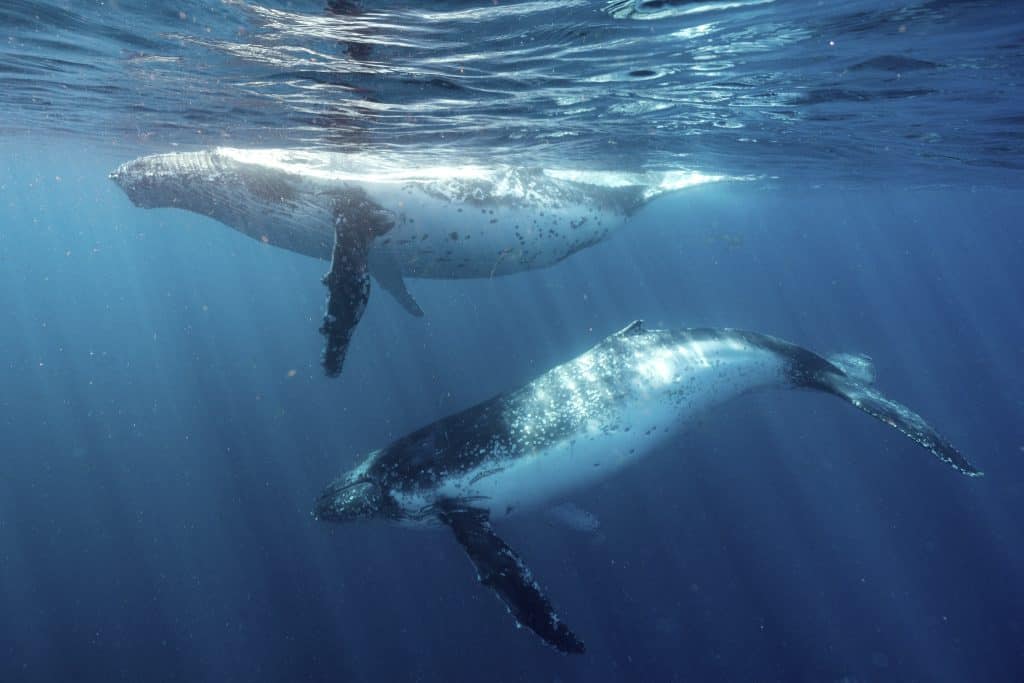 The North Coast of NSW is one of the best places in Australia to observe humpback whales. The country’s most easterly point, Cape Byron, is a renowned land-based vantage point for spotting these cetaceans. A half-hour-drive south of Byron Bay, Ballina is home to the Ballina Head and Black Head lookouts — both good for spotting whales — and whale-watching cruise company Out of the Blue Adventures who tour with a marine biologist.

How about swimming alongside humpback whales? At Jetty Dive in Coffs Harbour, a 5.5-hour drive north of Sydney, you can don a wetsuit, mask and fins, and slide into the water alongside whales. The curious creatures often glide right up to swimmers to take a closer look. Port Macquarie is the halfway point between Sydney and Byron Bay (four hours from either) and has a 9-kilometre Coastal Walk that is dotted with lookouts perfect for whale spotting. Cruise on Port Jet Cruise Adventures or get a bird’s-eye view with Port Macquarie Seaplanes.

In Port Stephens, 2.5-hour’s drive from Sydney, grab your binoculars and head to Tomaree Head or Stockton Beach and cruise with Moonshadow-TQC Cruises or Aquamarine Adventures. In the city of Newcastle, two hours north of Sydney, Coast XP heads out to spot whales and other marine life in the open water. For great views from dry land, head to Shepherds Hill lookout, a popular spot with locals. 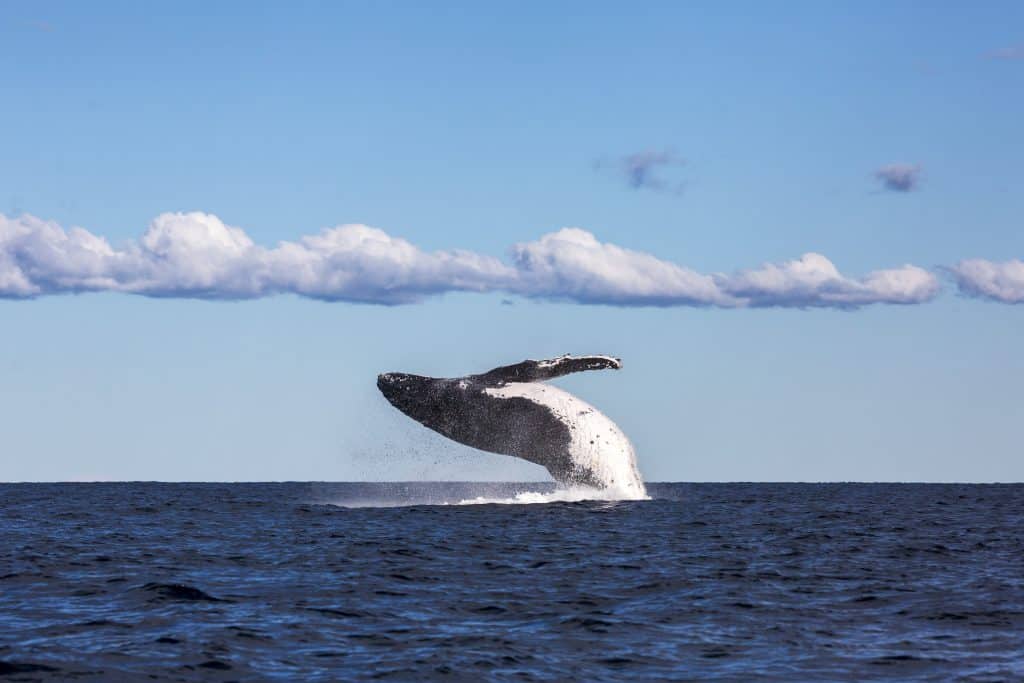 Jervis Bay, a three-hour drive south of Sydney, is halfway along the whales’ 4,000km migration route, and whales often stop here to rest and play with newborn calves. You can swim with whales with Dive Jervis Bay, or cruise with Jervis Bay Wild. Head to Penguin Head at Culburra Beach or the viewing platform in Booderee National Park to watch from the shore.

Joined to the mainland by a sand bar, Broulee Island, two hours south of Jervis Bay, is another great vantage point. At Toragy Point, a panoramic lookout has information about whales and marine life as well as great views. Further south, Narooma Charters runs whale-watching tours to stunning Montague Island, and the coastal town of Merimbula’s Sapphire Coastal Adventures has a 100 per cent whale spotting guarantee.

Whales are a huge part of the history of Eden, which was a whaling centre for centuries before becoming a whale-watching hub. In calm Twofold Bay, calves get a rest and whales feed before their final leg back to Antarctica. Take a self-drive tour along the Killer Whale Trail that takes you to five historic whaling sites or get out on the water with Cat Balou Cruises or Freedom Charters. The Eden Whale Festival in October–November has events including a land-based whale-spotting tour and tours of historic Davidson Whaling Station, plus food, entertainment, music, film and fireworks.