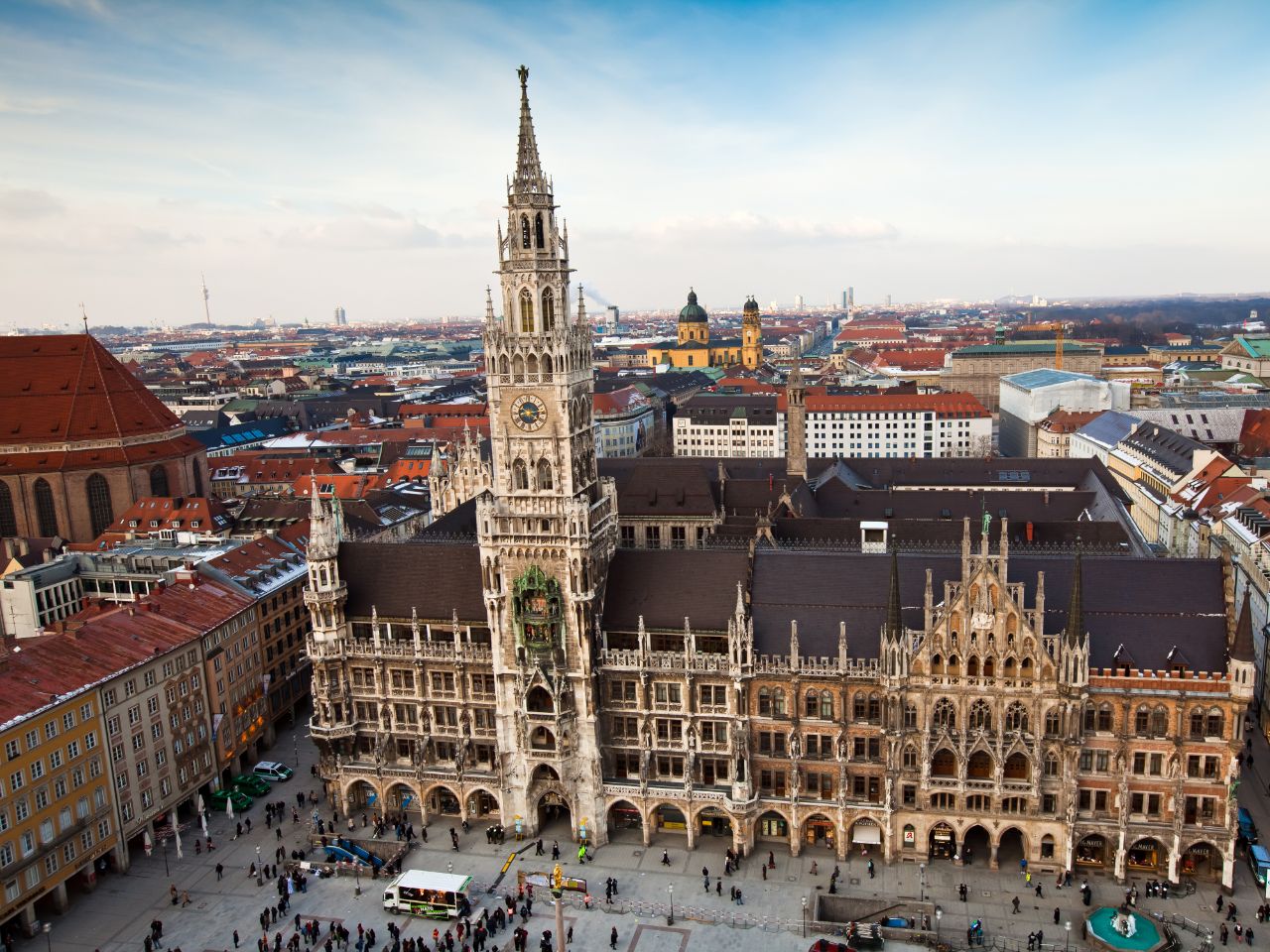 Bavaria is a state of rivers and mountains, fields and forests, beer and wurst, in the southeast corner of Germany. At its heart, you’ll find its capital city, Munich.

This lovely metropolis earned its city status in 1175 and although many historic buildings were destroyed in World War Two, it retains its charm thanks to an architectural blend of new and old. It is considered a global centre of art, culture, innovation and tourism. Munich is an ideal gateway for exploring the southern part of Germany including the Black Forest and the Alps. It’s well worth spending a little time in the city before you venture forth – here’s our guide to 24 hours in München.

St. Peter’s Church is one of the city’s great landmarks and its oldest parish church. Affectionately known by locals as “Old Peter”, it’s the place to go for amazing views and a great perspective of Munich. There are 299 steps to ascend to reach the observation deck at the top of the church’s tower, but it’s well worth the climb for the spectacular outlook – on clear days you can see all the way to the Bavarian Alps.

Head for the New Town Hall in the city’s main square, Marienplatz to enjoy the spectacle that is the Rathaus-Glockenspiel: a 15-minute depiction of stories from Munich’s past, using 43 bells and 32 life-sized figures. The same show has been taking place at 11am, 12pm and, during the summer months, 5pm, daily since its construction in 1908. It’s a quirky but an integral piece of Munich’s culture.

Time for a little retail therapy? The pedestrian streets of Kaufingerstrasse and Neuhausser are the place to go for high street shopping and great people watching. If you’re looking for a high-end experience, Maximilianstrasse is where you’ll find the designer boutiques. If you’re in need of lunch, the Viktualienmarket is packed with lavish local delicacies including every kind of wurst (sausage) imaginable and sweet treats such as Auszogne, Dampfnudel and Apfelstrudel.

The English Garden is one of the world’s largest urban parks – taking up nearly four square kilometres, just north of Munich’s city centre. Stroll its paths, taking in the architectural and landscape features. The garden is home to two beer gardens,a Chinese tower, a large lake and an open-air amphitheatre; there’s even an artificial stream where surfers can ride a standing wave.

If you thought Munich’s beer halls were just about the beer, you’d be mistaken. The Hofbräuhaus is the oldest in Munich – a state-owned institution since 1589 which sits at the heart of Bavarian culture. Beer halls are a symbol of southern German hospitality: a very social, friendly environment. You won’t be served without a seat, so strike a conversation and bag a spot at a long table where you can listen to some great music, order up a platter of roasted suckling pig with potato salad and sauerkraut, wash it all down with a dark Bavarian beer and enjoy the atmosphere.

The traditional Bavarian breakfast is not for the faint of heart (or stomach). Weisswurst, or white sausage, is the start of the show – sausages made from minced veal and pork back bacon and flavoured with lemon, onions, herbs and spices. Served with a Bavarian mustard and Brezen (a salted bread which you’ll recognise as a pretzel) and washed down with beer. It’s said that these sausages should not be allowed to hear the chime of the noon bells.

Germany’s reputation as a centre for culture is due in part to its 80-plus museums and galleries.  They cover everything from classical art to technology – there’s even a museum dedicated to the humble potato! One of the finest is the Deutsches Museum, which was opened in 1903. It is the world’s largest museum of science and technology, housed in an historic building on a small island in the Isar River. If you’re travelling with children, the Kids’ Kingdom section, with its giant guitar and rolling ball track, is a must.

This is just a small sample of the many experiences Munich has to offer, and there’s much more to see in the surrounding region – ask your personal travel manager for more details.