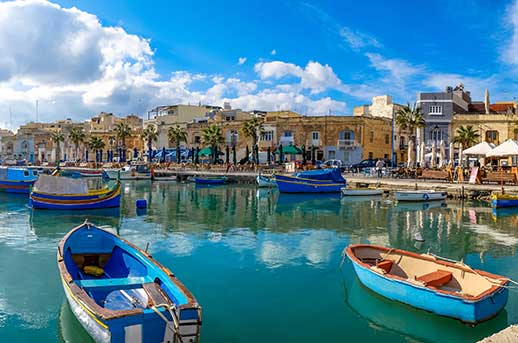 The body of water known as the Mediterranean is unique in that, despite its relatively modest size, it is bounded by three continents: Asia, Africa and Europe. Two island nations are surrounded by its sparkling waters, along with more than 180 other islands that belong to the eighteen countries that share its coastline – here are five of our favourites.

Mallorca is just under an hour’s flight from Valencia and is the largest of the three Balearic Islands. Its winning combination of beautiful beaches, captivating villages and mountainous interior make it a popular choice for visitors seeking a balmy escape, but there are plenty of picturesque corners where you can find as much solitude and tranquillity as you could hope for. Walk the pathways of the UNESCO World Heritage-listed Serra de Tramuntana mountain range and visit impossibly beautiful villages such as Fornalutz and Deià, explore ancient monasteries such as Lluc and Pollença, and swim in the jewel-like waters of Es Calo des Moro or S’Amarador beaches.

Cala Goloritzé is considered one of the world’s most beautiful beaches, and one of the most iconic in Sardinia – high praise given the number of incredible spots you’ll find on this dazzling Italian island, the second-largest in the Mediterranean. As well as a dazzling array of beaches, Sardinia offers visitors quaint villages, unique wildlife, enchanting caves and grottoes and vibrant festivals. If you’re into any form of adventure, chances are you’ll find it in Sardinia: from water-based activities such as surfing, sailing, wind-surfing, kite-surfing and diving, to land-based activities that include rock-climbing, mountain-biking, canyoning and hiking. Be sure to reward your exertions with some mouth-watering Sardinian cuisine: saffron-flavoured seafood freola featuring fresh clams and prawns, suckling pig and seada: delicate, lemon-flavoured cheese encased in pastry, which is fried and topped with warm honey.

The Republic of Malta is an island nation comprising three inhabited islands and numerous smaller islands and islets. Its position at a crossroads in the Mediterranean has seen it visited, inhabited and occupied by various peoples for the past 7000 years, resulting in a variety of cultural influences including British, French, Roman, Moorish, Sicilian and Spanish. Walk the ancient streets of Valletta, Rabat and Mdina, taking in their beautiful architecture and lovely views, pick up souvenirs and local produce at the Sunday markets in the colourful fishing port of Marsaxlokk, or take a day trip to the neighbouring islands of Gozo or Comino, home to the fabulous Blue Grotto.

Made famous by the book and subsequent movie, Captain Corelli’s Mandolin, Cephalonia sits just off the north-western coast of Greece, the largest in the Ionian group of islands. Explore its exquisite beaches, such as Antisamos and Myrtos, admire the pastel-coloured Venetian-style houses of Fiscardo and Sami, or hop on a boat for a day trip to the nearby islands of Ithaca and Zante. Hire a car and make the journey to the Paliki Peninsula, where you can sample locally-produced wine or laze on the distinctive red sand of Xi Beach.

Just a few kilometres outside the capital city of Heraklion stands the remains of the palace complex of Knossos, often described as Europe’s oldest city. It’s just one of the many ancient sites you can explore during a visit to the Greek island of Crete, and according to local mythology is the location of King Minos’ labyrinth. If you prefer to spend your time exploring natural wonders, the island also boasts dramatic gorges, idyllic beaches, ancient trees and more than 3000 caves. If you want to experience authentic Crete culture, a taverna or coffee house is a great place to start, especially in smaller villages where they are an integral part of local life – treat yourself to a coffee, ouzo or raki and soak up the atmosphere.

For these and many more amazing Mediterranean island holiday experiences, talk to your personal travel manager today.