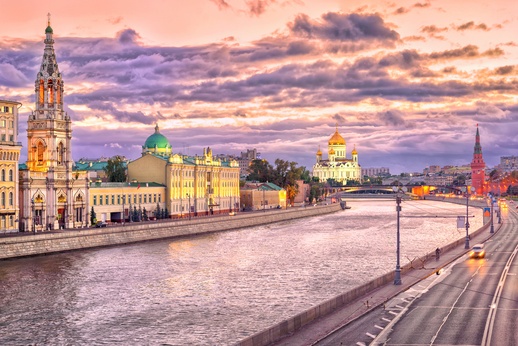 A Journey Along Russia’s Great Waterways

Russia is a land of great contrasts – the grand architecture of its cities and the vast expanses of its countryside; mighty rivers and immense lakes. Its history and culture are both fascinating and complex, and the people are proud of their heritage and welcoming to visitors. Take a river cruise between St Petersburg and Moscow and you’ll be free to relax and enjoy the passing scenery before going ashore to enjoy the many highlights along the way.

Also known as the ‘City of the Tsars’ thanks to its role as Russia’s capital for more than 200 years, St Petersburg is set on the Neva River at the head of the Gulf of Finland. It’s a city of incredible art, architecture and culture, including the State Hermitage – the world’s second largest art museum. You could easily spend days admiring its three million works of art which include Egyptian antiquities, classical vases, jewellery, and paintings by all the great names from Goya and Rembrandt to Gauguin and Picasso. The city is also one of the world’s great ballet centres, and attending a performance is considered an essential part of any St Petersburg experience.

On the banks of the Svir River, the town of Mandrogi was bombed out of existence during the Second World War, but has been reconstructed as a fairytale Russian village by a wealthy St Petersburg businessman. As well as the charming traditional houses, there’s a Vodka museum with more than 2000 varieties from around the world, a petting zoo and a quail farm. Be sure to pick up a few souvenirs from the craft workshops, which showcase traditional techniques and designs in woodcarving, weaving and lacework.

Lake Onega is the second-largest lake in Europe, and its waters are sprinkled with 1650 islands of varying sizes. Kizhi is one of the most interesting islands, thanks to its extensive collection of historic wooden buildings which were moved here from the surrounding area for preservation purposes. Today, the entire island serves as a kind of open-air museum, and a visit to the 22-dome, wooden Church of the Transfiguration, which was constructed in the 18th century entirely without nails, is a must.

Founded in the eleventh century by a prince of the same name, Yaroslavl is one of the oldest cities in Russia. Set on the banks of Europe’s longest river, the Volga, where it is joined by the smaller Kotorosl River, Yaroslavl is the largest of the Golden Ring’s eight major cities and is renowned for its architectural beauty. Spassky Monastery is one of the most visited sights – be sure to make the climb up its bell tower for a bird’s eye view of the city and river.

Stand in the centre of Red Square and you can’t help but be impressed by the display of Russia’s architectural splendour. At one end, St Basil’s Cathedral stands like an oversized gingerbread confection, facing the equally fanciful State Historical Museum. Lenin’s Mausoleum stands on the third side of the square, backed by the vast, red wall that protects the neoclassical Kremlin Senate On the opposite site of the square, the immense façade of the glass-roofed GUM shopping centre will entice you in to browse its luxury stores. Treat yourself to delicious street food such as pelmeni (dumplings) and pirozhki (buns stuffed with beef or other fillings) and take in a traditional performance of Russian music and dance.

The world’s largest country is a destination that will challenge and reward you at every turn. To start planning your own voyage of exploration along Russia’s great waterways, talk to your personal travel manager today.