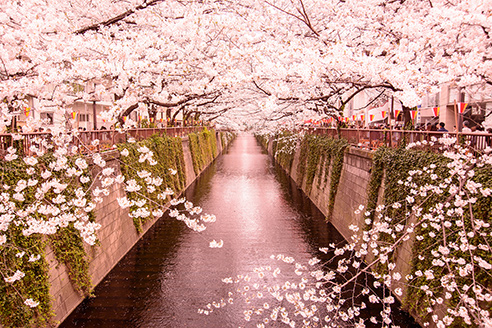 In springtime in Japan, a phenomenon sweeps the length of the archipelago and causes a nationwide flurry of picnics, outdoor parties and general celebration: it is the season of the cherry blossom. The season is brief, lasting up to a week before time and/or weather causes the fall of the blossoms. But to the Japanese, it is a metaphor for life itself: beautiful, fragile, unpredictable and essentially fleeting.

The act of appreciating and celebrating the cherry blossoms is known as hanami: here is our beginner’s guide to the aptly-named business of “looking at flowers”.

Unlike most of the world’s popular festivals which take place at a set time and/or day each year, hanami takes place whenever Mother Nature decides. In the southern, sub-tropical island of Okinawa, the trees, known as sakura, can bloom as early as January. On the northernmost island, the season can be as late as May. Timing can be affected by unusually warm or cool weather, and the blossoms may only last a few days if heavy rain or wind spoils the fun.

Cherry trees, and the art of appreciating them when in bloom, is not restricted to any one part of the country, but there are a few locations that we would highly recommend for an authentic hanami experience. Tokyo may be a bustling metropolis but it also has plenty of open park spaces where cherry trees number in the hundreds or even thousands. Ueno Park is a great favourite, but you can expect to share your picnicking space with large crowds. The ancient former capital of Kyoto is another scenic location, but again, you won’t be alone. If you want somewhere a little less crowded, head either north or south: the crowds will be smaller but the trees no less spectacular.

The art of hanami is essentially the art of picnicking, Japanese-style. You’ll need food (such as a bento box of fresh, yummy local delicacies), something to drink (but maybe not the cherry blossom-flavoured Pepsi in favour of some good sake), a something to sit on (a picnic blanket or groundsheet is best). You’ll also need warm clothes as it can get chilly, especially at night, and if you really want to soak in authentic hanami tradition, pack a book of haiku poems too.

For anyone who’s interested in Japanese culture, hanami is an absolute must-do travel experience. It’s one of the busiest times of the year to visit this fascinating and varied country, but you will come away with a greater understanding of and appreciation for the Japanese way of life and the landscape itself when it’s at its most beautiful.

Ride a cable car in Funaoka Castle Park; take a soak in an onsen bath at a traditional Japanese ryokan or inn; enjoy a nighttime walk along a riverside path in Kyoto: whatever you choose, the cherry trees will form a spectacular backdrop to your hanami experience.

Although there are countless websites and vast teams of meteorologists dedicated to accurately predicting each year’s festival, this is one of the busiest times to visit Japan so it’s important to plan and book well in advance. Your personal travel manager can recommend tour operators that will offer you your best chance of seeing the blossoms and joining the fun.