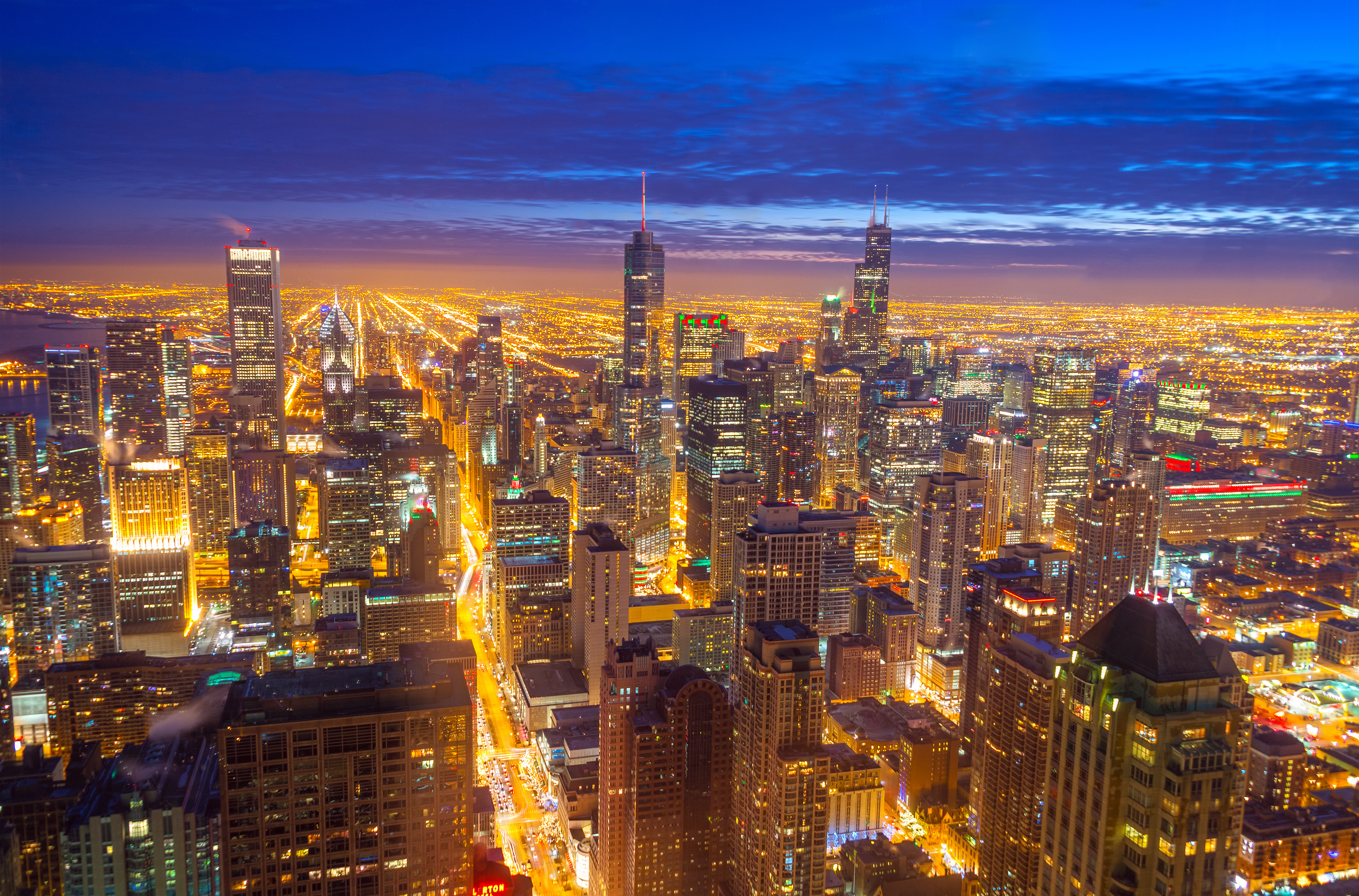 Chicago: the Windy City, the heart of the Midwest and the third most populous city in the United States. From its position on the southwest shores of Lake Michigan, it is a gateway city to the rest of the country, as well as an architectural wonderland and a cultural icon. We’ve put together a list of some of our favourite ways to spend time in this wonderful city.

In 1871, nine square kilometres of the city was destroyed in the Great Chicago Fire, which according to one popular legend was started when a certain Mrs O’Leary’s cow knocked over a lantern in a barn. The rebuilt city was constructed on a grid system that makes it easy to navigate, and at the heart of this grid, just a few short blocks from the lakefront and running parallel to it, you’ll find Michigan Ave aka “Magnificent Mile” or “Mag Mile”, which has been described as one of the top ten shopping avenues in the world. This is where you want to go for serious shopping: as well as department stores such as Bloomingdale’s, Neiman Marcus and Nordstrom, it’s also home to some of the world’s biggest luxury brands, including Cartier, Louis Vuitton and Chanel. You’ll find plenty of more affordable brands as well, both on Mag Mile itself and within its three major shopping centres.

Also located on Mag Mile is the Neo-Gothic Tribune Tower, home of the Chicago Tribune newspaper, which was built to replace the original building that was destroyed in the Great Chicago Fire. Rocks and bricks that were brought back to Chicago by reporters from all over the world including the Alamo, Hagia Sophia and Great Wall of China have been incorporated into the building. Whilse public access to most of the building is restricted, the ground floor restaurant, Howells & Hood (named for the building’s designers), is well worth a visit, if only to sample the local produce and some of the 119 craft beers they have on tap.

For a more casual dining experience, sample some of Chicago’s most-beloved street food: deep dish pizza which is traditionally made with the cheese on top of the base and a chunky tomato sauce on top, and the Chicago-style hot dog which is an all-beef sausage served on a poppy seed bun with various accompaniments… but definitely no ketchup!

Not far from Mag Mile in the heart of downtown, you’ll find the iconic, twin-antennaed, 442-metre high, 108-storey Willis (formerly Sears) Tower. From its completion in 1973, it stood as the world’s tallest building for 25 years, and despite having since been surpassed, it’s still well-worth joining the more than one million visitors who visit Observation Deck each year.

Another option is to test your nerves in the building’s Skydeck, where you can step outside the building and into one of The Ledge’s glass boxes, which protrude from the side of the building 412 metres in the air.

Once you’ve seen the city from above, it’s time to get out and explore it in person. The hop-on hop-off open-top bus tour is a great way to get an introduction to the city, but our favourite option is to take a 90-minute, open-air river cruise that features the most iconic Chicago structures. Take the twilight cruise and watch the city come alive as the lights come on, while learning about the history, culture and architecture from the volunteer experts, who are known as docents.

The Chicago Lakefront Trail offers another perspective on the city in the form of an eighteen-mile lakefront path that will take you past boat harbours, nature sanctuaries, boardwalks, beaches, playgrounds and Lincoln Park Zoo.

Don’t forget to leave time for a visit to Field Museum of Natural History, which is home to Sue, the world’s largest, most complete and best-preserved T-Rex skeleton, as well as an amazing array of exhibitions.

If you’re in the mood for some playtime, head to Grant Park: 300 acres of park that sits between the lakefront and the city’s business district (which is known as The Loop). It includes Maggie Daley Park, where you can ice-skate along the skate ribbon in winter, learn rock climbing on the 40-foot high climbing wall or visit the Play Garden: the play ship, lighthouse slide, mirror maze, talking tubes, slide crater and mini-golf will keep the whole family entertained for hours.

Divvy Bikes are a city initiative that make it easy to explore the city by bicycle. You can purchase a daily pass that allows you unlimited trips of up to 30 mins, picking up one of 5,800 bikes from one of 580 docking stations. There’s even a Divvy app so it’s easy to locate the nearest docking station and check for available bikes. We recommend you try the 606, a newly-completed trail that used to be elevated rail line. It’s only two miles long, but you’ll need to allow plenty of time for stops to enjoy the parks and art installations that are dotted along the way.

The Cubs, the Bulls and the Bears, respectively baseball, basketball and football: the much-loved trilogy of Chicago sports fans. Wrigley Field has been home to the Cubs since 1921 and therefore has the strongest sentimental appeal, but it’s hard to beat the lakeside location of Soldier Field, which is home to the Bears.

If we’ve motivated you to add Chicago to your next USA adventure, you can contact your local personal travel manager here.