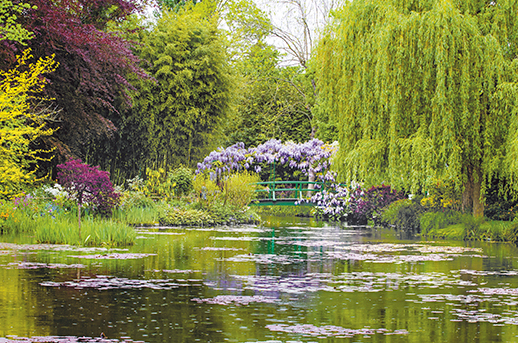 Cruising the River Seine and Normandy

When the Seine River reaches Paris, it has already travelled around 400 kilometres from its source in the Burgundy wine region, but it still has another 340 or so kilometres to meander before it enters the English Channel near Le Havre. The beautiful French countryside provides a tranquil backdrop to the river, and a river cruise is a great way to soak up the sights along the way. Here’s a sample of what you can expect on a voyage from Paris to Normandy and back again.

The pretty village of Giverny is considered by many to represent the heart of the Impressionist movement, thanks to its status as the home of artist Claude Monet, who lived and painted here for 43 years. His distinctive pink-walled house and its beautiful and iconic gardens are a magnet for more than half a million visitors each year. Walk through the gardens and photograph his famous lily pond from the much-painted Japanese bridge.

From the formal gardens, magnificent art collection and very posh stables of the Château de Chantilly to the towering medieval ruins of Richard the Lionheart’s Château Gaillard, and the Fecamp’s Palais Bénédictine where the eponymous liqueur was first created, the Seine Valley and its surrounds offer a grand building for every interest. You can even enjoy a private classical concert in the unforgettably opulent setting of the Château de La Roche Guyon.

From the Victor Hugo museum in the charming village of Villequier to the ancient city of Rouen, where Joan of Arc was burned at the stake, the Seine Valley and Normandy are littered with fascinating and at times poignant historic sites. For many, the most moving of these are the Somme battlefields, where today’s tranquillity belies the horrors that were experienced by the hundreds of thousands of soldiers who lost their lives here during the First World War. A visit to the Australian National Memorial and its newly-built Sir John Monash Centre is a deeply moving way to experience Australia’s story of the Western Front.

As well as the fabulous food that you can expect to enjoy onboard your river cruise, you will also have ample opportunities to sample the best of local cuisine when you go ashore. Take one of the river boat’s e-bikes and explore the local villages, returning to the ship with authentic Camembert cheese and accompaniments for a spectacular picnic to enjoy on your balcony as you watch the French countryside slip by. When you reach the pretty port town of Honfleur where the Seine meets the Normandy coast, you must also sample the fresh local seafood such as lobster, clams, scallops and oysters.

As well as the aforementioned Bénédictine liqueur, which can be enjoyed on ice as a pre-dinner aperitif or straight as a post-prandial digestive, Normandy is also renowned for the bi-products of all that farmland, much of which is used to grow apples and pears. This produce, as well as flavouring many sweet and savoury dishes native to the Normandy region, are also used to produce cider and Calvados – an apple brandy that is traditionally enjoyed with apple ice cream as a palate cleanser between courses.

Most river cruises begin and end in the City of Lights: Paris, providing fabulous bookends to a fabulous journey. Ask your personal travel manager for details and options for your river cruise.