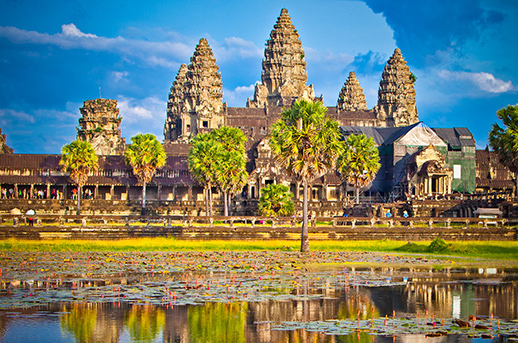 South-East Asia has long been a popular holiday destination for Australians, with attracting tens of thousands of visitors every year – everyone from budget backpackers to those seeking a luxury five-star getaway. But if you’re looking to discover a little more on your South-East Asian holiday, why not head to Cambodia? The country has so much to offer travellers – world-famous temples, secluded spots of paradise, a fascinating insight into the recent and sometimes tragic history of the nation, as well as charming, thriving towns and cities full of friendly locals. What’s not to love? Here’s our guide to Cambodia.

A visit to the iconic, UNESCO World-Heritage site of Angkor Wat has to be at the top of the must-see list for any visitor to Cambodia. There are numerous temples around the site of Angkor, and it’s worth spending at least two days to fully explore the vast surroundings. To give an idea of the scale of the site, at one time, Angkor was the biggest pre-industrial city in the world. The most famous, well-known and spectacular of the temples is Angkor Wat – looming large, more than 65 metres over the tranquil river below. It is well-worth making a pre-dawn visit to Angkor Wat, to witness the unforgettable sight of the sun rising behind the vast temples, against the pink and purple hues of the early morning sky. Up close, Angkor Wat is equally impressive, with more than 2,000 individual carvings of celestial dancers, as well as intricate designs covering the walls. The charming town of Siem Reap, characterised by French colonial architecture, is the best base to explore the temples and ruins, located approximately 6km from Angkor Wat, with other temples and ruins sites also located nearby. While in Siem Reap, while away a few hours cruising down Tonle Sap Lake – it’s the largest freshwater lake in South-East Asia, and is also the only lake in the world that flows in opposite directions, with the current flowing one way in the dry season, before reversing during the monsoon.

Cambodia’s largest city, and capital, Phnom Penh is a melting pot of the old and the new, with chaotic roads and bustling markets existing alongside the stark contrast of nearby peaceful and opulent palaces. The scenic riverfront that snakes through the city, dotted with bars and cafes, is a great place to take time out and simply watch the world go by. One of the must-see sites in the city is the lavish and ornate Royal Palace, and neighbouring Silver Pagoda, adorned with Italian marble and laid with more than 5,000 silver tiles. Phnom Penh also offers a fascinating insight into the often-troubled past and history of Cambodia, through several interesting museums that are definitely worth a visit, including the distinctive rust-red National Museum, featuring over 5,000 Angkorian artefacts, as well as memorabilia from more recent times. Slightly out of the city, the Killing Fields of Choeung Ek are a stark and tragic reminder of the country’s history, and are now a moving memorial to the thousands of citizens executed at the site during the rule of the Khmer Rouge during the late 1970s.

Keen fans of Australian cinema will recognise Sihanoukville from the recent film ‘Wish You Were Here’, which was filmed on location in the Cambodian beach paradise. Taking its name from the former King Sihanouk, this beachside town is the main port of Cambodia, and a vital trade route to the rest of the world. It’s the perfect place for those who are after a mixture of secluded beaches, and fun nightlife – Sihanoukville has both in abundance. Away from the centre of town, if you venture a little further afield, it’s possible to find your own piece of private paradise, with entire stretches of white sandy beaches remaining completely free of development. If it’s just a quiet, relaxing beach break you’re looking for, with not much to do other than sit back, read a book and enjoy the sweeping, unspoilt views, head a few hours to Kep, where you’ll also feast on some of the best seafood in South East Asia, served by the bucketload.

The riverside city of Battambang is the second largest in Cambodia, and unlike many other locations around the country, whose buildings have suffered from the consequences of decades of conflict, the quaint French colonial architecture here remains largely intact, and provides for an interesting step back in time. Battambang is easily accessible from the popular tourist hubs of Siem Reap and Phnom Penh, and the stunning rural scenery is worth the trip alone. Battambang is also a great choice for those who wish to escape the ever-increasing tourist numbers visiting Cambodia, as it’s long been overshadowed by more well-known towns and sites. Battambang is also the centre of a uniquely Cambodian tradition, ‘rain gambling’, with locals putting money on how much rain will fall in a certain place, at a certain time. When in town, keep an eye out for the ‘rain bookies’, who use walkie-talkies to communicate with the ‘rain spotters’ – scouts who are scattered around the surrounding region to verify the rainfall.
Plan the trip of a lifetime to Cambodia now with your personal travel manager or find one near you here.