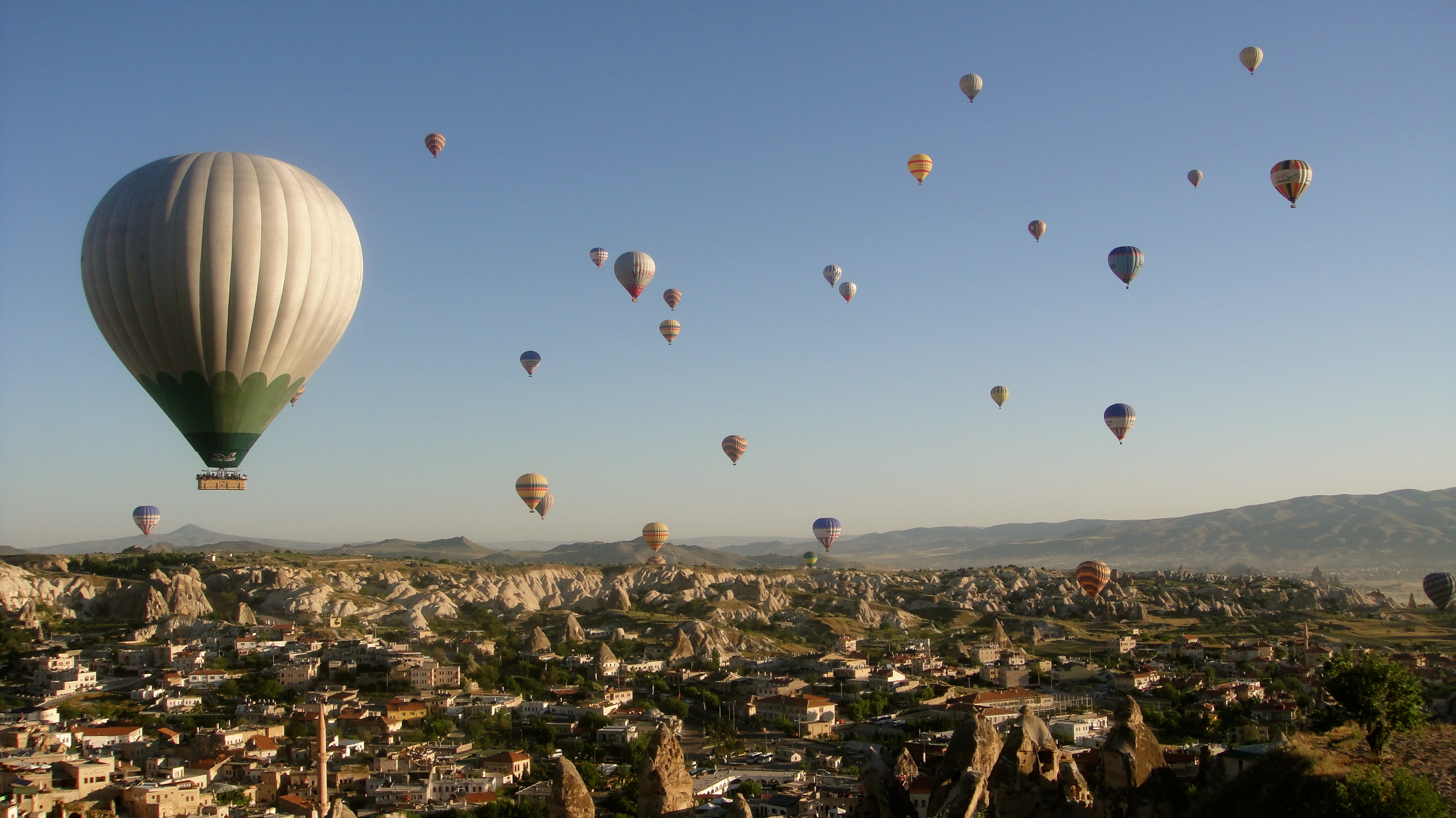 With a history stretching back to the cradle of civilisation, modern-day Turkey possesses an inherent and unparalleled wealth of cultural and architectural splendour born from the rise and fall of great empires. Read on as we serve up a few of the delights that make modern-day Turkey one of the most captivating and contrasting destinations in the world.

At the crossroads between modern-day Europe, Asia and Africa, Turkey has a history spanning more than 10,000 years and has hosted some of the world’s greatest civilisations. Beginning with Çatal Höyük, one of the oldest human settlements in the world (ca. 7000 BC), this Cradle of Civilisation has been inhabited by Ancient Greek, Roman, Byzantine and Ottoman empires – all having left their mark in the way of a stunningly rich and contrasting architectural, archaeological and religious legacy. Testament to this legacy, Turkey claims an impressive 9 registered UNESCO sites and two of the Seven Wonders of the Ancient World.

Perhaps one of Turkey’s most iconic images is the huge disembodied stone heads of Mount Nemrut (1st century BC). This remote site, sitting atop the mountain some 2150m high, was left undiscovered until 1881 and is now known as the world’s highest open-air museum. The tomb and temple complex consists of three terraces featuring seated statues of Greek and Persian gods 26-33 feet tall, although the heads of the statues have toppled and now lay scattered on the terraces. Amongst the ruins on the mountain top, visitors can experience some of the most majestic sunset and sunrise panoramas in the world.

Not only is Troy one of the world’s best known historical sites, but with its 4,000 year history, it is also one of the most famous archaeological sites of the world. There are 9 archaeological layers, dating back to 3000 BC, with house foundations, theatres, sewage systems and public bath houses being unearthed to reveal an advanced ancient society.

Situated near the town of Canakkale at the entrance to the Dardanelles, it was the site of the siege of Troy by Spartan and Achaean armies and immortalised in Homer’s The Iliad. The fortifications through which the Greeks smuggled the famous wooden horse, told of in The Iliad, can still be seen today and today a replica Trojan Horse now adorns the site.

One of Turkey’s most impressive, and most visited, archaeological sites is Ephesus. The site boasts the largest cluster of Roman ruins on the eastern Mediterranean despite only an estimated 15% having been excavated. The site was a Greek, and then Roman city. During the Roman period it was the second largest city in the empire – behind Rome – and with a population of 250,000, it was also the second largest city in the world. The quality of the site’s preservation allows visitors to literally walk in the footsteps of Romans.

The city was famed for the Temple of Artemis (completed 550 BC). Today, the temple is one of the two Seven Wonders of the Ancient World located in Turkey and although now marked by only a single column, the temple was once considered an architectural masterpiece.

One might well say ‘when you’ve seen one ruin you’ve seen them all’ but really this site is so vast and so well preserved, that without much difficulty you can picture the Romans wandering up and down the main avenue in their robes, filling the amphitheatres and milling in the bath houses. What a civilised society they were. Karin Evert – Personal Travel Manager

With a history so expansive, and occupying a land at the crossroads of religion, continents and cultures, it is no wonder that Turkey has a connection to most societies on earth. In modern times, that impact has been an intimate one for Australians. The World War I battle at Gallipoli, a strategic offensive in an attempt to knock Constantinople out of the war, ANZAC troops were engaged in an eight month battle which is now commemorated every year on 25th April, ANZAC day. This commemoration has become an increasingly popular pilgrimage for Australians to travel to Turkey to honour the fallen soldiers. It is a small, but powerful example of the breadth of influence this stronghold land has had throughout history, and a terrific introduction to journey through Turkey.

The Turkish landscape is dotted with more than just historical gems. Due to a unique and active geological past, and a stunning diversity of conditions, Turkey now has more than 40 protected national parks.

In the Aegean region, the UNESCO site of Pamukkale, one of the most dramatically striking natural wonders of Turkey, translates to literally mean ‘Cotton Castle’. These white travertine terraces step down a steep cliff of almost 200m. Cascading thermal spring waters pool in the terraces to create the spectacular landscape. These natural spring waters were cause for the founding of the nearby spa town of Hieraplis at the end of the 2nd Century BC, the ruins of which, can still be visited today and include ancient baths, temples, theatres and the largest necropolis in Anatolia, containing 1200 tombs.

This landscape also has a rich and mysterious cultural history. Cappadocia has seen human settlement since the 4th century and is literally infused with cave dwellings, troglodyte villages and underground towns – the scale of which is overwhelming. The region was the place where different faiths and philosophies met and influenced one another and was a refuge for the early Christians, who escaped persecution by living and worshipping underground. Two of the most impressive underground cities are Kaymaklı, which has 8 levels, and Derinkuyu, which reaches down to 55 metres. There are an estimated 3000 rock churches in this region.

With over 8000 km of coastline, Turkey is home to some of the most beautiful coastal cities and pristine beaches in all of Europe.

On the Aegean Coast, Bodrum, with its whitewashed houses cascading in bright pink bougainvillea, is well-loved as one of Turkey’s most trendy and sophisticated resorts; with a blend of history, proximity to a vast array of fantastic beaches, fishing villages and hip nightclubs. The views of the city are exceptionally striking against the stunning backdrop of the Castle of St Peter, which stands formidably between the city’s twin bays – making it a magnet for yachtsmen.

The Mausoleum at Halicarnassus, what is now Bodrum, is the second of Turkey’s Seven Wonders of the Ancient World. The tomb was built from white marble and rose some 135 feet high. The fame of the tomb spread to such an extent that word ‘mausoleum’ is taken from a corruption of the Latin form, Mausolus, of the governor’s name – Mausollos. Today, only the foundations remain at the site.

Near to Bodrum is an abundance of other seaside towns, each with their own charm and character; from the lively bars and restaurants of Gümbet, to the more secluded and high-end Bitez, which attracts an older crowd.

Fethiye is commonly regarded as the most beautiful destination on the Mediterranean Coast. Historically known as the “Untouched Virgin of the Lands Lights”, the area combines pristine islands, coves, long sandy beaches and a dramatic backdrop of cliffside Lycian tombs, to create one of the most picturesque landscapes in the world. The town itself is a traditional market town set around a beautiful natural harbour. It offers a great variety of entertainment, shops and bazaars, bars and restaurants, as well as catering for water sports, including diving and sailing.

The crowning jewel of Fethiye’s beauty, is the nearby is Olu Deniz, a serene lagoon beach with pure turquoise waters.

Another highlight of the region is a visit to the eerie ghost town of Kayaköy, literally ‘stone village’. Once the Greek town of Karmylassos, it was abandoned in the 1920s and now sits hauntingly amongst overgrown grasses on the hillside.

The most stunning region of Turkey’s southern coastline is around Antalya, known as the Turkish Riviera. The city itself has a historic heart but like much of Turkey it has seen something of a renaissance, with old wooden Ottoman mansions being converted into boutique hotels to cater to a thriving tourism market.

The city is set high on cliffs with dramatic mountain backdrops and spectacular ocean views for the luxury hotels built on the cliff sides on the outskirts of town. There are no cars allowed in the city centre.

One of the most beautiful beaches in the region is found at Lara, 12 km to the east, while to the west stretches the long pebble beach of Konyaalti. Both can be enjoyed most of the year round due to the warm climate and water temperatures.

A must see in the region is the historic site of Aspendos – 50km east of Antalya. During the Roman Empire, Aspendos was an important trade centre, however today, the most impressive aspect of the town is the stunning theatre, constructed approx. 162 AD. Seating 15,000, the theatre has been beautifully restored and each year hosts the Aspendos Opera and Ballet festival which takes place in June and July.

Byzantium, Constantinople, and now Istanbul; this incredible city has been the capital of empires for over 10,000 years. Set between the Bosphorus Strait and the sea of Marmara, the city extends both on the European (Thrace) and on the Asian (Anatolia) sides of the Bosphorus, and is the only metropolis in the world that is situated on two continents. The city not only draws its beauty from the plethora of stunning castles, palaces, mosques, churches and monuments left behind by past empires, but also from a romantic mix of modern Asian and European influences. Although Istanbul is no longer the official capital of Turkey, it is still undoubtedly cultural and historical epicentre of the region.

The European side is also divided in two by the Golden Horn or Haliç, which roughly divides the historic part of old Istanbul from the modern city. Most visitors will stay in the old town as the majority of Istanbul’s most famous sites are in this area; The Blue Mosque, Aya Sofya (Hagia Sophia), Topkapı Sarayı (Palace) and the Grand Bazaar (Kapalı Çarşı) are all within a 30 minute walk of each other.

Although it is convenient, the disadvantage of staying in the Old Town is that, since it is not a residential area, you don’t really benefit from the ambience of the modern city of Istanbul. Istanbul today is also a city undergoing a dramatic renaissance, bubbling with a bold new energy that’s exciting and intensely alive with cutting-edge international film and music festivals, designer shops and chic restaurants and bars. Trendy new entertainment venues are springing up everywhere; from sophisticated cocktail bars to clubbing to the global beats of the finest international DJs, the choices are endless. In the summer, Istanbul also revels in water-side fun, with a whole host of open-air venues boasting stunning views across the Istanbul skyline.