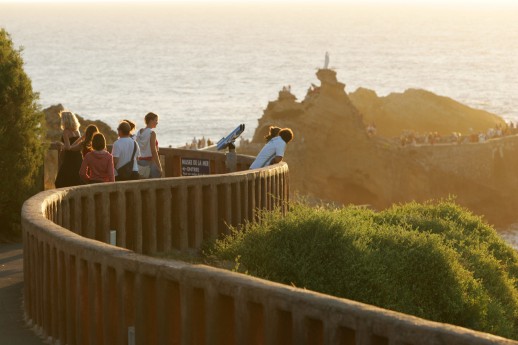 While the winter months deter all but the diehard Australian beachgoers, Europe’s beach season is in full swing. From long, white sandy beaches to small, isolated coves, European beaches are many and varied offering something for every sun-worshipper. A personal travel manager can help you pick the best place to get a winter glow.

Located on Brac Island off the Croatian Dalmatian Coast, Zlatni Rat beach is a mix of pristine white shoreline, crystal clear blue water and stunning pine forests. The beach is formed by a sandspit that reaches out into the Adriatic Sea near the harbour town of Bol. Running 650 metres on either side of the spit, Zlatni Rat beach is an ideal place to escape and savour your own piece of paradise. The beach has also become popular amongst windsurfers who take full advantage of the afternoon winds that pass the island. Visitors to the beach can either take a 20 minute stroll from Bol or enjoy one of the tourist trains that run to the beach during the summer months.

Once privately owned and kept hidden from the public Isola Bella is now one of Europe’s top summer locations. Isola Bella is located off the coast of Sicily in the South of Italy and has become one of the regions top sunbathing beaches. Privately owned until the bankruptcy of its owner in the 1990s, an Italian branch of the World Wide Fund now manages the island, striving to keep its natural beauty in tact. The beach is famed for its pristine pebble beaches and clear waters. The lack of surf makes it a popular place for sunbathers and families. Access to the small island is made from the coastal town of Taormina via boat. During low tide it is possible to walk from Taormina directly to Isola Bella.

Biarritz has long been one of the most popular beach regions of France. The picturesque and famed beach is located near the French and Spanish border in the Bay of Biscay. Aside from its stunning beaches, the region is famed for its surfing and its long history dating back to the 1800s including a stint as a medical hot spot as doctors prescribed patients a swim in the sea at Biarritz to cure all manner of ailments. Since this time the region has introduced a palace – now the Hotel du Palais – and two casinos to cater to the increasing tourist demand. Travellers to the region should also investigate the museums including one entirely dedicated to the history of chocolate. As such a popular seaside destination, accommodation options are in abundance to suit every budget.

Plan your trip with your local, personal travel manager http://www.travelmanagers.com.au/ptm-search/