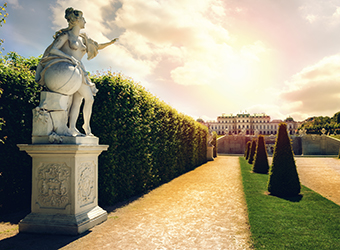 Eastern Europe at an Easy Pace

Prague, Vienna and Budapest: three Eastern European cities whose names conjure images of cobbled streets, stunning architecture, centuries of art and history, and a wealth of delicious local cuisine. A guided tour will allow you to make the most of your time in these fascinating destinations, with unique and enriching experiences that are designed to deliver an understanding of what makes each one unique.

Hungary’s capital city is made up of two parts, divided by the Danube River which flows through its centre: the river terraces and hills of Buda and the flat plain of Pest. The pedestrianised Váci Street is great for retail therapy and people-watching. Considered one of Europe’s best shopping streets, it’s lined with shops and cafes and runs parallel to the river from Vörösmarty Square. Be sure to allow time for a visit to Café Gerbeaud – an iconic coffee shop and confectioner that’s famous for its ornate interior and delicious cakes.

When you’re ready to walk off those treats, head across the river and climb the hill to the fairy-tale castle known as the Fisherman’s Bastion – it’s the ideal spot for stunning views across the city. Finish your sightseeing and unwind with a dip in the therapeutic waters of one of the city’s thermal baths. Rudas Bath is one of the oldest thermal baths in Europe – travellers and locals have been enjoying a relaxing soak in its Turkish-style setting since the 16th century.

Follow the Danube upstream and eventually you’ll find yourself in the stately city of Vienna. For centuries, this was the resident city of the Habsburg dynasty, before becoming the capital of the Austro-Hungarian Empire. A centre for art, music and culture, today’s Vienna is filled with beautiful Imperial palaces, incredible art collections and one of the world’s greatest opera houses. Get lost in the 2600 rooms and 19 courtyards which make up Hofburg Palace, admire the amazing park-like gardens of Schönbrunn Palace or climb the 343 steps to the top of St Stephen’s Cathedral for amazing views of the city.

One of Vienna’s most beloved attractions is the Spanish Riding School, where you can see the famous Lipizzaner stallions training and performing their incredible skills. Haydn, Mozart, Beethoven and Schubert are among the many legendary composers for whom Vienna served as both home and inspiration – be sure to take in a classical concert featuring their works, ideally in the spectacular setting of one of the royal palaces or Vienna’s majestic opera house.

One of Europe’s most beautiful and historic cities, Prague is the perfect companion to Vienna and Budapest on any Eastern European city. Prague Castle is a vast complex which dates from the ninth century and includes one of the city’s main tourist drawcards – St Vitus’ Cathedral. The city is split in two by the Vltava River, and one of the best ways to cross from the Castle to the Old Town is via the city’s iconic Charles Bridge – a pedestrian-only edifice which has spanned the waters since the 15th century.

Any walking tour of the city must include a visit to the Old Town Square, where, every hour the Astronomical Clock puts on a show to delight visitors of all ages. Czechs allegedly consume more beer than anyone else in the world, so when you’ve worked up sufficient thirst exploring the sights, be sure to try some of its speciality brews.

Are you looking for an Eastern European holiday that combines the convenience and local expertise of a guided tour with the freedom to linger over meals, explore independently and spend more time in each location? Your personal travel manager can help you find an itinerary that delivers the best of both worlds.