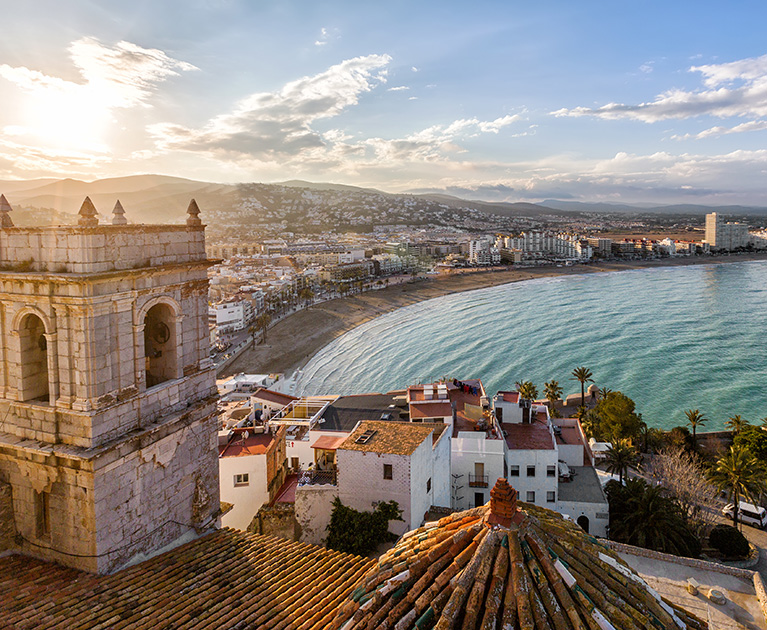 Spain and Portugal each have their own rhythms, which spring from their unique cultures, histories and landscapes. From the history and culture of the Spanish capital, Madrid, to the cobblestoned charm of Portuguese towns like Óbidos, from listening to fado in a Lisbon bar to taking a cooking class in Segovia, don’t be surprised if you find yourself swept up in the romance and beauty of the destination. Barcelona, Lisbon and Madrid are the best-known cities of the Iberian Peninsula, but here’s a taste of some of our other favourite, less-known spots.

Follow the stunning Costa Daura coastline an hour or so south from Barcelona and you’ll reach the ancient city of Tarragona, which has been perched overlooking the sparkling Mediterranean since at least the 5th century BC. As you walk its ancient streets, you’ll find Roman ruins aplenty, including a chariot track and an amphitheatre. Shopaholics will happily lose themselves amid the boutiques of La Rambla Nova, while foodies can pick up locally-produced goodies at the nearby Mercat Central market.

Continue along the Mediterranean shoreline and you’ll find yourself on the Costa del Azahar, where the town of Peñíscola is dominated by two features: its lovely beaches and its castle, which occupies a headland that is connected to the main town by a narrow stretch of land. The castle dates back to the 13th century and offers stunning views of the coastline, especially from its lavender- and olive tree-filled Artillery Park. Explore the antique shops and pottery stores of the old city before finding an open-air restaurant to enjoy the views and freshly-caught seafood.

In the heart of the Castile-La Mancha region, roughly halfway between coastal Valencia and central Madrid, you’ll find the historic town of Cuenca. Renowned for its gravity-defying Hanging Houses which appear to cling to the walls of the Huécar Gorge, you could easily forget which century you’re in as you walk the cobbled streets of its hilltop Old Town, exploring the tiny stone alleyways and the richly-gilded interior of its Cathedral. A visit to the Museo del Arte Abstracto Español, which is located within the Hanging Houses, provides a quirky, modern contrast to the ancient surroundings.

From Cuenca, if you were to continue through Madrid and out the other side, you’d reach the Roman city of Segovia, whose most beloved landmarks have earned the city its UNESCO World Heritage status. Its castle, which rises on a rocky crag above the city, is said to have been an inspiration for Walt Disney’s Cinderella castle. Its aqueduct, which marches on double arches through the centre of the town, is an amazing feat of engineering that’s considered to be one of the best-preserved examples of its kind.

From Segovia, it’s a short drive to Ávila, whose old city is completely encircled by mediaeval walls which give it a fairy-tale appearance when viewed from afar. Walking the 2.5-kilometre perimeter of the walls is a great way to gain an insight into their scale, before rewarding your efforts with a few traditional Yemas de Santa Teresa – a local speciality pastry that’s made with egg yolks and syrup, flavoured with lemon and cinnamon.

The city’s Plaza Mayor is considered one of Spain’s most beautiful squares – even more magical when the surrounding buildings are lit up at night, so grab an ice cream and find a spot from which to soak up the atmosphere. Its university is one of the oldest in the world, housed in a suitably impressive building whose carved façade has entranced visitors for centuries – join the many visitors in searching for its intricate “frog on a skull”.

The provincial city of Valladolid is famed as the gateway to the picturesque vineyards of five separate wine regions, including the revered Ribera del Duero. Earn yourself a wine-tasting by exploring the vibrantly-coloured streets and squares that radiate from its lovely Plaza Mayor.

Spain is liberally sprinkled with UNESCO World Heritage sites, including the majestic gothic cathedral of the northern Spanish city of Burgos. The city sits along the famed Camino de Santiago, and straddles the lovely, tree-lined River Arlanzón, which you can stroll along to reach the fascinating Museum of Human Evolution.

A short drive north from Lisbon will deliver you to the town of Óbidos, whose mediaeval fortress walls, charmingly narrow, cobbled streets and traditional, blue- and white- painted houses make it one of the prettiest in Portugal. Historically gifted to each new Queen of Portugal on her wedding day, you’ll find plenty of photogenic spots, and maybe time to enjoy a taste of Ginjinha d’Obidos: a sweet alcoholic liqueur which is often served in a chocolate cup.

The heart of the Port wine industry which gave the city its name, Porto is set on the hills alongside the Douro River. There are plenty of parks in which to catch your breath while seeking yet another amazing view of the city, or you can climb the 75-metre high Clérigos Tower, if you’re brave enough to tackle its 225 steps. No visit to Porto is complete without crossing the river to Vila Nova de Gaia to explore its famous wine cellars and sample their wares.

Soak up the art, food and colourful history of Spain and Portugal on a guided coach tour that delivers all the highlights and none of the hassles – ask your personal travel manager to help you choose the itinerary that suit you best.