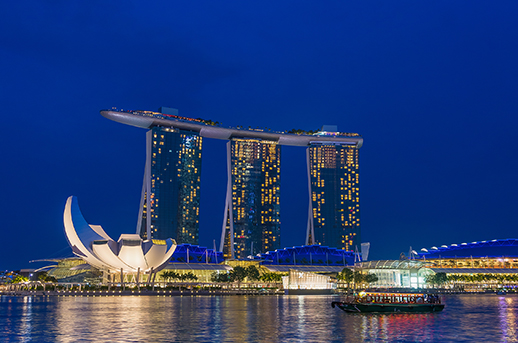 If you follow the coastline from Singapore north and you’ll encounter some of the great cities of Asia: some well-known and much-loved by travellers for centuries; others still relatively undiscovered to the wider world. Whether you’re thinking of embarking on a Grand Tour of Asia or you just want a taste of what the region has to offer, these cities are a great place to start.

The “Lion City” has been a crossroads for travellers in this region for centuries and as a result, it’s a true melting pot of cultures, cuisines, languages and customs. The city continues to grow and change, with spectacular waterfront structures like the gravity-defying Marina Bay Sands Hotel and the other-worldly Gardens by the Bay. But venture a little further and you’ll find there’s still plenty of green space on this compact island, including the Singapore Zoo which sprawls over 28 hectares and is home more than 300 diverse and often endangered species. Allow yourself time to walk the streets of Chinatown and Little India, sampling the incredible hawker food and picking up some great bargains along the way.

Bangkok is a city of tranquil Buddhist temples and chaotic street markets; of grand palaces and traditional canal-side houses, and all life is focused on the Chao Praya River which runs through the centre. For a glimpse into authentic Bangkok life, take to the water in a longtail (Bangkok’s version of a water taxi) and head for the floating markets, where you’ll find dozens of boats lined up side by side, each stocked with fresh fruits, vegetables and flowers. There are temples everywhere in Bangkok, but Wat Pho is one of the largest, and its vast gilded reclining Buddha, which measures four metres high and 46 metres long, is one of its main drawcards.

The city formerly known as Saigon has a fascinating and at times sombre history but has now emerged as one of the must-see destinations of South East Asia. Its classic French colonial architecture is nestled alongside colourful markets and modern high-rises. A visit to the War Remnants Museum provides an unforgettable insight into the thirty-year long conflict of last century, and the Cu Chi Tunnels take this a step further, taking you into the world of the Viet Cong soldiers.

Hong Kong’s setting is one of its star attractions, set amongst towering green mountains with a backdrop of sparkling blue water. Ride the tram to the top of Victoria Peak for the most incredible views of the entire territory, and stay for sunset, when the nightly lightshow from the myriad skyscrapers vying for attention begins. Dim sum is one of the highlights of Hong Kong cuisine: look for braised chicken feet, roast duck and char siu.

An intriguing mix of ancient and modern, Shanghai is a great city to explore on foot. Walk the Bund, the riverside promenade which runs along the west bank of the Huangpujiang River, and admire the many colonial buildings along its length, shop until you drop on Nanjing Road then head for the rooftop Bar Rouge for a cocktail and amazing bird’s eye views of the city.

The second-largest city in South Korea, Busan is a great place to experience your first taste of Korean culture. The bustling Ja-Gal-Ch’i Fish Market, which was set up by women peddlers during the Korean War and is now known as ‘Aunt’s Market’, is a great place to try all manner of amazing seafood, shellfish and exotic seaweeds. If you’re looking for somewhere to unwind after the sensory overload of the market, pay a visit to the ninth century Beomeosa Temple, which is dedicated to the pursuit of a life filled with happiness and generosity, or indulge in the meditative Korean art of making and drinking tea.

Just across the East China Sea from Busan are the islands of Japan. Nagasaki is the largest city on the island of Kyushu, and for many, its name represents the horrors of war. An estimated 75,000 people died when the second atomic bomb was dropped at the end of World War Two, but the city has been rebuilt and today, its Peace Memorial Park and Atomic Bomb Museum are two of its main attractions. The nearby village of Shimbara is a charming example of a sixteenth century town and features reconstructed five-storey feudal castle.

If these destinations have you longing to visit, talk to your personal travel manager about how best to build them into your dream itinerary, or help you find a cruise that combines them all.