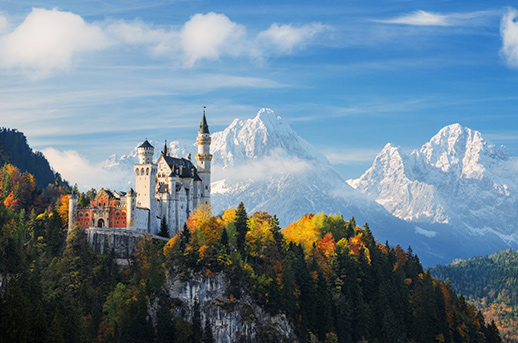 Just over an hour from Munich in Germany, nestled into a pretty valley in the Bavarian Alps, you’ll find the town of Oberammagau. With a population of a little over 5,000 people, on paper this town is like many others in the region: quietly beautiful, with classic Bavarian architecture, and surrounded by impressively grand mountains.

But every ten years, Oberammagau is overwhelmed by around half a million visitors who come to see the town’s production of the Passion Play, which tells the story of the last days of Jesus Christ. It is a tradition that goes back to 1633, when the region was being ravaged by the bubonic plague. The town’s residents swore that if God would spare their village from further plague deaths, the play would be performed for all time and, keeping true to their word, in May 2020 the 42nd production since it began in 1634 will premiere.

The season will run between May and October 2020 and many tour companies are already taking expressions of interest as both tickets and accommodation are limited. If you’re interested in being part of this cultural phenomenon which involves more than 2,000 local residents, the region has plenty of other highlights to make your stay worthwhile and tempt you to prolong your stay. Whether you’re into castles and palaces, mountains and lakes, or cities, there’s something for everyone in this unique part of Germany: here are a few of our favourite examples.

Probably the most recognisable building in Bavaria, this turreted fairytale palace perched precariously on a remote hilltop is often referred to as “Mad King Ludwig’s Castle” and was the inspiration for Disneyland’s Sleeping Beauty Castle. Despite the attention lavished on the design and construction by the King, he only spent a total of eleven nights in the castle before his death in 1886. Although he never intended it to be open to the public, it was opened just six weeks after his death and today it lures as many as 6,000 visitors per day – so be sure to book your visit in advance to avoid a lengthy wait.

The view from the top of Germany’s highest peak takes in more than 400 other mountaintops in Germany, Austria, Switzerland and Italy, but can be easily reached without serious mountaineering equipment or expertise. Instead you can rely on excellent German engineering, in the form of a cog railway and cable car, to reach the summit, and allow the view, rather than the climb, to take your breath away. In winter, the mountain is a popular spot for skiing and snowboarding, but if you’re here for the Passion Play, you’ll have to be content with climbing, hiking or sightseeing.

It would be wrong to visit Bavaria and not spend some time in its first city, and although there’s much more to this ancient city than beer halls, it’s fun to pay them a visit and sample the local brew. Munich (or München, as it’s known locally), gained city status in 1175 and attracts millions of visitors each year, but with plenty of open spaces, an excellent network of cycle paths and a bicycle hire system in place, you can easily escape the crowds and explore the city whilst working off a few calories from that beer and the local speciality, Weißwürste or white sausage. One of the lesser-known attractions you may come across on your bike is the Eisbach, a man-made river that forms a standing wave at one spot, making it a popular draw for experienced surfers.

For more inspiration on Oberammagau, the Passion Play or some first-hand tips and advice on Europe you can contact your local personal travel manager.