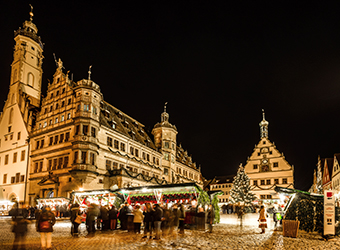 If you’re looking for a holiday destination that’s so picturesque it seems to have sprung directly from the pages of a story book, Europe has plenty of options to choose from. From bewitching castles to enchanted forests, these are our favourite fairy-tale European locations.

Picture a range of snow-capped mountains, with a tranquil lake in the foreground. At the centre of the lake, there’s a pretty island with a tiny stone church visible between the trees. The entire scene is overlooked by a castle, complete with moat and drawbridge, built of white stone and perched precariously on the edge of a cliff. Does this sound like the ultimate fairy-tale setting to you? The lakeside town of Bled has been attracting visitors from all over the world since its days as a health resort in the 19th century, although today, visitors are just as likely to be golfing, hiking or horse-riding as bathing in its mineral hot springs. The island in the centre of Lake Bled is best reached by traditional, flat-bottomed wooden boats known as pletna, although the 99-step climb to the island’s church need not be as challenging as the custom followed by local newlyweds – the groom carries his bride, who must remain silent until they reach the top.

The resort town of Sintra is an easy day trip from the Portuguese capital of Lisbon, although you may decide to linger for longer to fully appreciate its many beautiful palaces and castles. High above the town in the foothills of the surrounding Sintra Mountains, the candy-coloured façades and elaborate interiors of the spectacular Pena National Palace were constructed in the 19th century as a summer residence for the Portuguese royal family, and now seem a world away from modern life. The Palace offers breath-taking views overlooking the surrounding forest as well as the medieval remains of the Castle of the Moors, whose crenelated walls tumble further down the hillside like an Iberian version of China’s Great Wall. Nearby there’s also the Moorish-inspired estate of Montserrate, the neo-classical Seteais Palace (now a luxury hotel) and the palace, gardens and otherworld inverted tower of the Quinta da Regaleira.

Around 30 kilometres south of Brussels, a line divides Belgium into the Dutch-speaking northern region of Flanders and the French-speaking southern region of Wallonia. However, it is not this imaginary boundary which draws visitors in their thousands to this neck of the woods every April; rather it is the neighbouring Hallerbos forest, which for a few weeks each spring is carpeted in millions of delicate bluebells. The original, ancient trees were destroyed during the First World War, but thanks to a subsequent period of reforestation, the forest is once again a magical place to explore, using the network of walking trails that criss-cross its 552 hectares.

Early in the morning, the sun evaporates the mists covering the tidal flats of Normandy, and gradually, an island appears like a mirage. It rises straight out of the sea, the jumble of granite eventually giving way to a small collection of shops and restaurants that are towered over by the spire of the abbey which shares the island’s name. Access to this incredible collaboration between geology and architecture was once only possible by crossing the mudflats at low tide, but its natural causeway has long since been replaced by a bridge which provides safe passage at all but the highest of tides. As one of the most popular sites in France, protected by its UNESCO World Heritage status, the island attracts millions of visitors each year despite a permanent population of just 50 (including the still-resident monks in the Abbey), but it is still possible to find tranquillity here after the crowds have departed by spending the night in one of its boutique hotels, guesthouses or auberges.

Germany’s Romantic Road is a 350-kilometre route that meanders through many of southern Germany’s most beautiful towns and villages. One of the best-preserved and sublimely picturesque of these is Rothenburg-ob-der-Tauber, whose medieval old town is a chocolate-box wonderland of half-timbered houses and cobbled streets, encircled by protective stone walls. If you have a head for heights, it’s worth making the 61-metre climb to the top of Roedertor Tower, where, for a modest fee, your efforts will be rewarded with incredible views of the town. We recommend you further reward your exertions with a Schneeball – a delicious snowball-shaped ball of dough that’s deep fried then covered in sugar or chocolate.

If these captivating destinations have you longing to feature in a fairy-tale of your own making, why not ask your personal fairy godmother travel manager to help you set the scene.