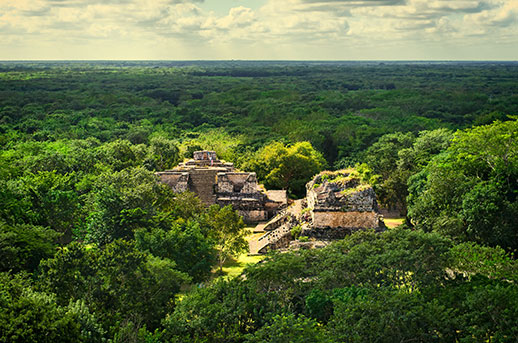 Mexico is an ever-popular destination, thanks to its warm climate, friendly people, rich heritage and amazing food. Here are some of our highlights.

Mexican cuisine is renowned as flavoursome, colourful, healthy and tasty, and Mexico is recognised by foodies as having one of the world’s best street food cultures. Follow your nose, and the crowds, and you’ll soon discover why the Mexican Spanish name for street food is “antojitos”, which means “little cravings”. Tacos filled with flavoursome carnitas, tamales filled with delicious savoury or sweet fillings, and tiny stuffed empanadas – all washed down with a watermelon- or mango-flavoured agua fresca.

The Mexican mariachi band, playing traditional folk songs and dressed in their distinctive, often flamboyant traditional costume, is one of the quintessential sights (and sounds) of Mexico, but it’s just one of the many styles of music you’ll hear.

With a coastline that stretches for close to ten thousand kilometres, it’s hardly surprising that one of Mexico’s key attractions is its stunning beaches. From the buzz of tourist towns like Cancun on the Yucatan Peninsula to the tiny village of Mazunte on the Pacific coast, there are more than enough stunning beaches to go around. The aptly-named Hidden Beach is tucked away on one of the Marieta Islands near Puerto Vallarta and is believed to have formed on a former bomb testing site. It’s not the easiest spot to reach, requiring a boat ride and a swim, but your efforts will be amply rewarded.

From the spider monkeys that inhabit the southern rainforests to the Mexican Prairie Dog of the northern states, Mexico has plenty of exotic wildlife to offer. Its coastal waters are also teeming with life, with the world’s largest ocean reserve having been created around the Revillagigedo archipelago off the coast of Baja California. These islands are part of a submerged volcanic chain that forms an ideal environment for humpback whales, sea turtles and rays, along with almost 400 species of fish.

When the Spanish arrived to colonise Mexico, they found a culture that was already thousands of years in the making. Today, there are 33 UNESCO World Heritage Sites around the country, ranging from the 7,000-year-old rock paintings of Sierra de San Francisco to the 45-kilometre long, sixteenth century stone Aqueduct of Padre Tembleque; from the Mayan ruins of Chichen Itza to the colonial walled city of San Francisco de Campeche, you could spend months exploring the many reminders of Mexico’s past and still have plenty to justify a return visit.

If you’ve developed a taste for the delights of Mexico, talk to your personal travel manager today.