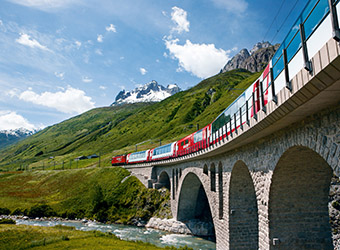 Switzerland is renowned as a land of chocolate and cheese; of cuckoo clocks and clear blue lakes; but it offers much more to visitors than simply a collection of chocolate box moments. As well as those famous, snow-capped peaks, you’ll also find cosmopolitan cities, welcoming people and therapeutic spa resorts.

Mountains and lakes of Switzerland

From Lake Geneva in the southwest corner to Lake Constance in the northeast, Switzerland has more than 1500 lakes of various sizes, some of which serve not just as a pretty photographic backdrop to your holiday snaps but also as an international border. Popular for water sports including sailing and windsurfing during the summer months, their setting becomes even more magical during the winter months when surrounded by snow-blanketed mountains. You don’t have to be a mountaineer to appreciate the splendour of these peaks though – take a funicular, aerial tramway or mountain railway and you’ll reach dizzying heights in total comfort.

Switzerland is one of Europe’s best countries to explore by rail travel, thanks to its excellent network that connects the major cities and smaller towns, and its scenic routes that offer unparalleled views of snowy peaks and sparkling lakes, green mountain pastures and towering viaducts. The Glacier Express, somewhat ironically-named given its leisurely pace, links Zermatt with resort-town St Moritz, while the Bernina Express is a UNESCO World Heritage-listed narrow-gauge railway that travels through more than 50 tunnels and across nearly 200 bridges before delivering you into Italy.

Surrounded by other foodie destinations including France, Austria and Italy, Switzerland has taken a little from each neighbour and developed its own unique cuisine. Cheese-lovers can delight in sampling famed varieties such as Emmental, Gruyère and Appenzeller, while fondue and raclette take cheese appreciation to another level. Rösti and various wurst (sausages) are classic dinner options, and no visit to Switzerland is complete without sampling its famously creamy milk chocolate – a visit to the Lindt & Sprüngli Factory near Zurich will take you behind the scenes to see how the magic happens.

Switzerland can be divided into four main regions based on languages: German, French, Italian and Romansch, and each region has its own unique accompanying cultural characteristics – for example, yodelling and the alpenhorn, which are both considered stereotypically Swiss, are largely confined to the mountainous regions. Stately homes and chateaus are scattered throughout the country, with one of the most spectacular, Chateau de Chillon, set on an island in Lake Geneva. Art lovers will find plenty of fantastic galleries and museums to keep them enthralled, from Bern’s Kunstmuseum (filled with works by Botticelli, Picasso, van Gogh and more), to Zurich’s Swiss National Museum (built in the style of a French Renaissance chateau and with exhibits that range from prehistoric to modern).

Whether your preference is a tailor-made rail itinerary of glaciers and gondolas, a self-guided cycling tour of the lakes or a fully-escorted small group tour of the country’s highlights, your personal travel manager can help you plan your ideal Swiss adventure.