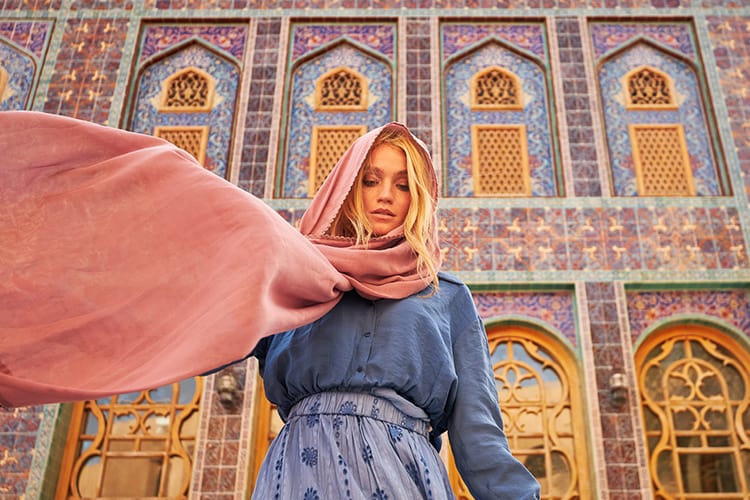 Top 10 things to do on a Qatar stopover

So you’ve decided to stop over in Qatar on the way to Europe or the UK. Or perhaps you haven’t yet and you’re looking for a reason. This emerging destination and hidden gem of the Middle East is quickly becoming a hot favourite for Australians looking for a stopover on their long-haul journey. And for good reason. There’s so much to do, so much to see, so much to eat! So much so that it could get overwhelming. To help you get started we’ve created a top ten list of things to do on your Qatar stopover.

While Qatar is in fact way more than desert, there are almost 12,000 square kilometres of soft sand dunes less than an hour from Doha’s city centre. Sand that’s beckoning to be explored, and seemingly “sings” with a magical vibrating sound as you move across it. A 4×4 safari is the way to go – speeding, gliding, and bashing in air-conditioned comfort. 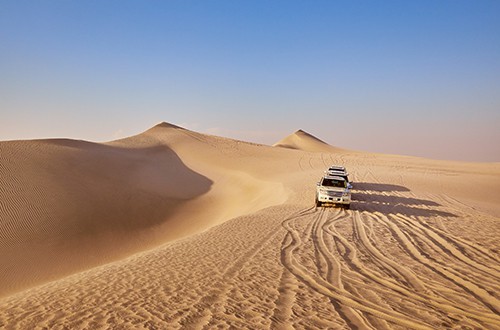 Accessible only by 4X4, this is one you would combine with your desert safari. Khor Al Adaid – or The Inland Sea as it is known in English, is considered a desert marvel. It’s UNESCO heritage listed and one of the few places in the world where the sea encroaches into the desert, creating an arid tropical environment which has no known parallel in the Middle East or indeed elsewhere in the world. Imagine a desert mirage, but as you get closer you suddenly comprehend it’s real. 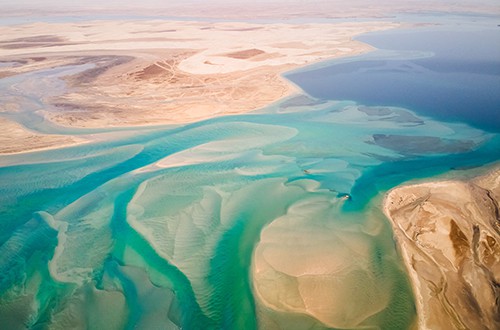 It’s best known as The Pearl, but you could call it the “Arabian Riviera”. This fascinating man-made island in the prestigious West Bay area sits on four million square kilometres of reclaimed land, million-dollar yachts parked around its centre. This is a lovely place to spend an afternoon wandering Venice-inspired canals and bridges and browsing designer boutiques before being forced to make the difficult decision of which of the charming restaurants and cafes you will try. 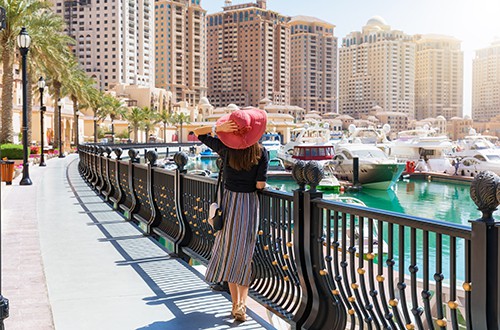 The Qatari government is committed to cultural excellence, particularly through art installations. One such example is East-West/West-East by Richard Serra. These 14-metre-tall steel structures strut out from the desert as if out of place but also perfectly in place. Spanning one kilometre they represent isolation and the passage of time; something almost every human on earth can relate to after the last couple of years. 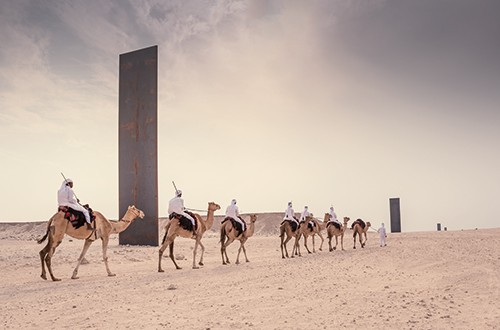 There’s so much happening in Souq Waqif it deserves its own top ten list of things to do! As common as it is to drop your cavoodle off at doggy day-care here in Australia, so is it common for Qataris to drop their falcons off at nursery before heading into Souq Waqif. This centuries-old trading market buzzes with activity. As you wind through its alleyways, each step magnetises your eyes, ears, nose, mouth and hands even deeper than the last. Art, music, food, spices, jewellery, perfume, performances, and fabrics so divine you won’t be able to resist running your hands along them in admiration. 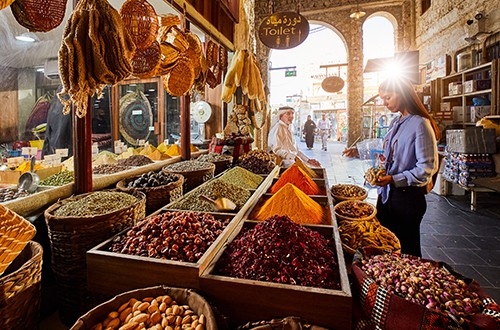 Before you even enter the Museum of Islamic Art you are met with its first masterpiece. The architecture was erected on a purpose-built island on The Corniche – a stretch of promenade along Doha’s serene waterfront. Step inside and you’ll find a collection which spans 1,400 years and three continents, a library of rare books, and a haute cuisine restaurant. The museum is also home to a variety of cultural performances throughout the year including the Qatar Philharmonic Orchestra. 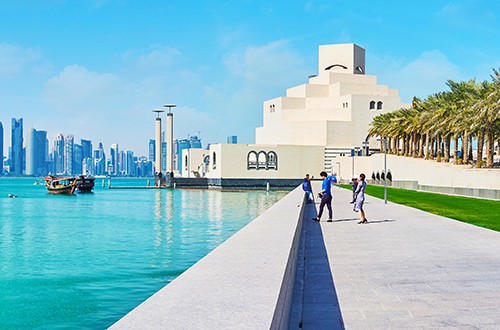 If you love getting into the great outdoors and a little soft adventure, then kayaking through the Al Thakira Mangroves is the activity for you. This natural wonder of Qatar reveals unique flora and fauna as you glide across the tranquil waters of Purple Island Lake. It’s here you’ll feel at one with nature as you appreciate the area’s salt-encrusted tree branches, pencil roots and migratory birds, such as herons and flamingos, alongside numerous fish and crustacean species. 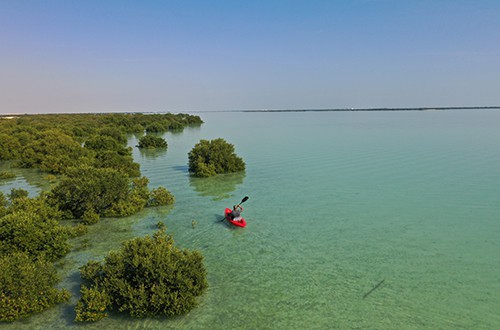 Another example of unique architecture, this time inspired by Qatar’s desert rose. The national museum is home to 11 stunning galleries which take you on a story-telling journey of the heritage and culture of Qatar, and bring life to its pre-historic past right through to the modern era. 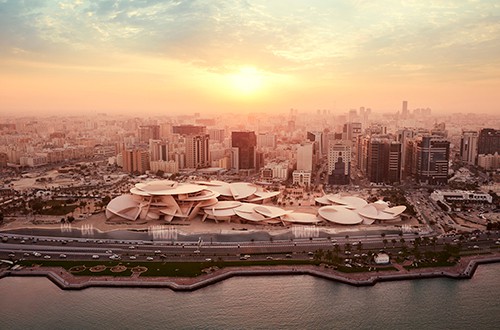 Like Souq Waqif, Katara Cultural Village really needs its own top ten list. Self-described as “a glimpse of the future of a world where people of different cultural backgrounds overcome their national boundaries and embrace common causes to promote a united humanity.” It’s a place where people share cultures to nurture understanding and peace. This is done through art, architecture, music, and of course food. It’s a place where locals meet and we recommend getting amongst them and trying something from one of the 20 Eat Street vendors. 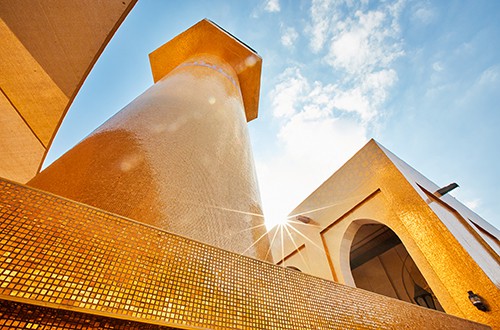 Qatar offers a range of shopping experiences, and we really do mean experiences. Not only can you find anything from Gap through to high-end brands like BVLGARI, you can also take a break from your retail therapy to jump on a roller coaster or ski down a slope. The Mall of Qatar is particularly popular with families and features an edutainment park called KidzMondo and an entertainment complex called Xtremeland in its 500,000 square metre precinct.

This is really just a starting point. There’s so much more to see and do, you might need to stop over in both directions. If you’ve been convinced that Qatar is the stopover for you, we’ve got something to sweeten the appeal even more. Right now, you can stop over in Qatar from just $31for two nights accommodation. Speak to your local personal travel manager who can help you get started.