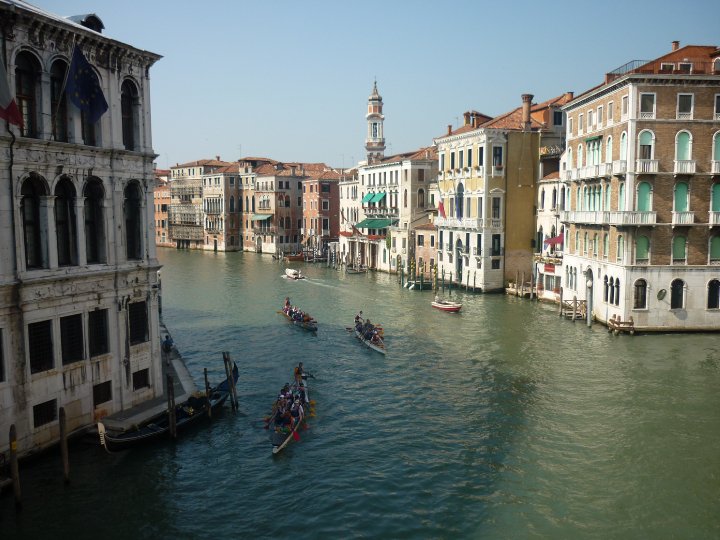 Top 10 things to do in Venice

Venice is perhaps the most cinematic city in the entire world, being immortalised in countless films, television shows and film clips for decades. The city’s distinctive canals and cobblestones can be seen in the James Bond thrillers Moonraker and Casino Royale,, Indiana Jones and the Last Crusade, the 2003 Italian Job remake, and The Tourist, starring Angelina Jolie and Johnny Depp, just to name a few. Madonna also chose Venice as the setting for her iconic Like A Virgin video clip  in the 1980s. Discover for yourself, why this city is so famous, with our guide to the top 10 things to do on your Venice visit.

1.    Be rowed gently down the stream in a gondola

The famous gondola boats are the most iconic feature of Venice, and a few lazy hours spent on-board is a must-do when visiting the city.  If you’re on a romantic break, spend a little extra to ensure a private journey, as most gondolas are built for six people. For something even more special, hire a singer or musician, and be serenaded as you gently float down the gentle waters.

2.      Marvel at the floor to ceiling mosaics at the most beautiful church in Italy

There’s no shortage of awe-inspiring and world-known churches in Italy, with the country being the home of the Roman Catholic Church. One of the most visually impressive is St Mark’s Basilica in Venice, characterised by three distinctive rounded domes on the outside, and intricate floor-to-ceiling mosaics on the inside. Within the basilica, there are three individual museums, including one with access to the roof, providing great views over the square and the canals below.

After you’ve admired the lavish basilica, take a little time to explore the adjoining St Mark’s Square, or Piazza San Marco. Known amongst the locals as simply ‘the Piazza’, it’s the cultural and urban heart of Venice, and a fantastic place to wander around, relax and watch the world go by.

4.      Cross the bridge from palace to prison at Palazzo Ducale

One of the greatest things about Venice is the accessibility of all the major attractions. Doge’s Palace, on Palazzo Ducale, also adjoins St Mark’s Basilica, and is an important historical Venetian building. It was the place of residence for the rulers of Venice, also known as Doges. A visit provides a fascinating insight into the governance of the city from the 15th century onwards, with a mix of Eastern and Western architectural influences. Other highlights include the world’s biggest oil painting, by Tintoretto, and the Bridge of Sighs – a tiny passageway linking the palace itself with an adjoining prison.

5.      Climb to the top of the city’s  tallest tower and hear the bells toll

The Campanile is the bell tower located in front of St Mark’s Basilica, and it’s also the tallest building in Venice. For unrivalled views over the winding canals and cobbled roads, buy a ticket and take the elevator to the top. As well as a panoramic glimpse over Venice, you’ll also get up close to the church bells, heard all over the city.

6.      Lap up the flavours of the world’s best gelato – anyone for hot pepper chocolate?

Italy is world-renowned for some of the tastiest gelato in the world, and nowhere in the country has such as smorgasbord of fantastic options as Venice. As well as all the traditional flavours, the hazelnut blend of Nutella is an extremely popular choice in the region, and there are also interesting variations on the regular chocolate theme, with ingredients such as fennel, ginger and hot pepper mixed in. Treat yourself and try them all!

7.      Take the Venetian water version of a city bus through the Grand Canal

A boat ride amongst the heavily congested water traffic of the Grand Canal is a unique Venetian experience, with ‘vaporettos’, acting as the equivalent of city buses. Vaporettos are simple passenger boats, with a capacity of a few hundred people. Set aside a few hours, grab a tasty gelato for the journey, and take in the fascinating historical palazzos that line the waterways.

The Rialto area of Venice is a must-see for several reasons. First, there’s the Rialto Bridge. Being a city of waterways and canals, there’s no shortage of bridges around town, and the Rialto is one of the most iconic. Constructed in the late 16th century, it was the first bridge to cross the Grand Canal and remains one of just four today. The arched cobblestone bridge also provides a gateway to the Rialto market. This is well-worth a visit, particularly for foodies. There’s a great range of local produce for sale, which perhaps not surprisingly is dominated by seafood.

Although it’s famous primarily for canals and cobblestones, Venice is also one of the great European cultural hubs. If you’re visiting around February, be sure to don your best mask and period-style dress and go along to the Venice Carnevale. All year round, contemporary art lovers can enjoy works from the likes of Pablo Picasso and Jackson Pollock at the Peggy Guggenheim Collection. It’s the premium destination for contemporary works in Italy, and offers a beautiful canal-side location to boot. Each year, from late August until early September, the city also plays host to the world’s  oldest film festival, the Venice Film Festival, or La Biennale di Venezia. Be sure to visit around this time if you enjoy celebrity spotting, as hundreds of Hollywood stars flock to town.

10.  Be blown away by the glass artists on Murano Island

It only takes a few minutes of wandering through the cobbled street markets alongside the canals of Venice, before you notice the must-have souvenir. Draped over nearly every stall, beautiful glass jewellery and other items, in every bright colour of the rainbow, from necklaces to rings is almost as much a symbol of Venice as the canals themselves. To see how these intricate hand-crafted pieces are created, head to Murano Island for a glass-blowing demonstrations at one of the many studios dotted around the lanes.