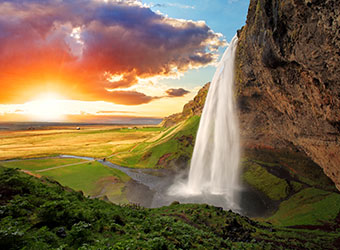 Picture a rugged island in the North Atlantic, with a land area roughly half that of Australia’s Victoria and a population that’s smaller than Canberra’s but a culture that dates back well over a thousand years.  Add geysers and hot springs, volcanoes and iceberg-infested lagoons, waterfalls, rivers and lakes, plus people with a strong sense of cultural identity and a great sense of humour: that’s Iceland in a nutshell.  As one of the world’s hottest tourist destinations, you may already have Iceland in your sights: here are our top tips for what to see and do.

Soak in the waters

Iceland’s a natural hotspot, complete with active volcanoes and plenty of geothermal activity, including geysers, mud pools and natural springs.  Soaking in a naturally heated pool is an essential part of Icelandic culture, going back to the time of the Vikings.  Your options include both public baths and swimming pools like the famous Blue Lagoon, as well as natural hot springs – or you can take a hot spring tour that allows you to visit a selection of the most popular bathing spots.

Despite its reputation as an elusive and unpredictable phenomenon, the Aurora Borealis is one of Iceland’s main drawcards.  The lights are usually visible between early September and late April but are subject to weather conditions and solar activity.  The darker the sky the better the view, so nights with little or no moonlight provide the best conditions, and if you can get away from the city lights of Reykjavik you’ll have an even better view.  One of the most spectacular settings to see the lights is over Jökulsárlón Glacier lagoon, or you can take a guided tour that will get you away from the city and into a spectacular natural setting.

Go out at night

It might not seem like a big deal to begin with, but if you’re visiting Iceland in high summer, the days are literally endless, which means that when the locals have called it a night, the roads are quiet, the natural attractions are uncrowded and the light is soft and perfect for photography.  Whilst you may not get the most popular attractions such as Gullfoss and the Blue Lagoon to yourself, you will find plenty of quiet places to soak up Iceland’s spectacular scenery in solitude.

These horses are bred to be small, hardy and well suited to local conditions, developed from ponies taken to Iceland by Norse settlers in the ninth and tenth centuries.  One of the aspects that makes them unique to other horse breeds is the two extra gaits they have.  There are several horse farms in Iceland that are open to the public, where you can take a horse trek or even experience the excitement of the autumn roundup, when the free-ranging horses are brought in for the winter.

The food scene in Iceland is rapidly growing and changing, with a firm focus on fresh, locally-sourced ingredients.  In some places you’ll still find the traditional (and somewhat challenging) dishes like fermented shark, sheep head or liver sausage (and there’s worse!), but you’ll also find plenty of restaurants that are finding new ways to showcase Icelandic produce.  Be sure to try Icelandic pancakes while you’re here – best served with jam or powdered sugar and cinnamon.

Iceland is home to around 130 volcanoes in total, of which 30 are considered currently active.  The most recent volcano to erupt was Eyjafjallajökull, in 2010.  Visitors to the two new mountains that were formed from this eruption will find areas where the ground is still warm enough to heat a sandwich.  Alternatively, the dormant Thrihnukagigur volcano, which is not far from Reykjavik and has not erupted for around two thousand years, offers the unusual opportunity to climb inside an ancient magma chamber.  Visitor groups are strictly limited to ensure the protection of the vast chamber, which is one of the biggest and most colourful accessible magma chambers on Earth.

If a visit to Iceland sounds like you, talk to your personal travel manager today.