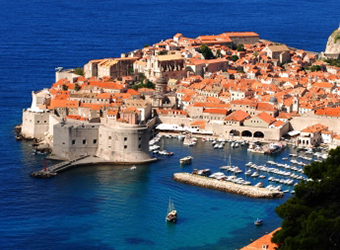 Since establishing its independence from the former Yugoslavia in the 1990s, Croatia has become highly desirable among Eastern European destinations.  From the myriad islands that hug its Adriatic coastline to the lakes, mountains and waterfalls that dot its interior; from the fascinating history that’s evident in cities like Pula and Dubrovnik to the warmth of the people who live there today, Croatia has much to offer.  Here are our travel tips for spending time in this fascinating and photogenic country.

Despite occupying slightly less land area than Tasmania, Croatia’s L-shaped layout, convoluted coastline and myriad offshore islands mean that you need to allow plenty of time to take it all in. From the Istrian Peninsula in the north to Dubrovnik in the south, it’s a journey of around 700 kilometres, and it’s around 500 kilometres from west to east, so we recommend that you divide your time between the various regions, allowing a few days in each before moving on to the next.

If you want to experience the best of Croatian cuisine, it’s a good idea to copy the locals. Every town has a market where you can sample fresh local produce, including berries, pomegranates, melons, figs, olives, various types of fungi, cheeses and herbs. Local olive oil and wine, along with various flavours of grappa are a must-try, as well as seafood that was pulled from the sea earlier the same morning. Ask your hotel concierge for dining recommendations that will take you away from the standard tourist fare: in coastal regions this means trying delicacies like crni rizot, a black risotto that gets its flavour and colour from squid ink. Inland you’ll find dishes more typical to Central Europe, such as cobanac, a spicy meat stew.

Plitvice National Park is truly spectacular, but it also attracts around one million visitors every year, so why not spend your time in one of Croatia’s other seven national parks instead? Krka National Park has its share of crystal-clear lakes and picturesque waterfalls, but is not as busy as Plitvice and is located only an hour’s drive from Split – handy if you’re using Split as a base to explore the offshore islands of Brac, Hvar, Korcula and Vis. The eastern regions of Croatia are much less touristy than their coastal cousins, but there are some equally lovely sites: from the medieval villages and thermal springs of Zagorje to the riverside university town of Osijek.

You can’t visit Croatia without exploring its islands, each one a unique and enticing jewel in the blue waters of the Adriatic. Hvar has an Italian feel thanks to its historic links to Venice and is famous for its lavender production, whereas Korcula’s main claim to fame is as the birthplace of legendary explorer, Marco Polo. Mljet is considered Croatia’s greenest island, with one third set aside as national park, while tiny Solta has many beautiful beaches that can only be reached by boat, bike, or on foot.

Many visitors to Croatia focus their attentions on its coastal attractions of Dubrovnik, Istria and the islands, but relegate the nation’s capital city, Zagreb, to a transit point and in doing so, miss out on its many highlights. From the winding, cobblestoned streets of its medieval Upper Town to the tranquil, park-like setting and nineteenth century arcades of Mirogoj cemetery, there is much to enjoy. Be sure to allow time to visit the quirky but memorable Museum of Broken Relationships.

If time allows, it’s well worth adding at least one of its neighbours to your itinerary: Slovenia, Bosnia and Herzegovina, Montenegro, Hungary and Serbia all share a border with Croatia. Ask your personal travel manager for details.