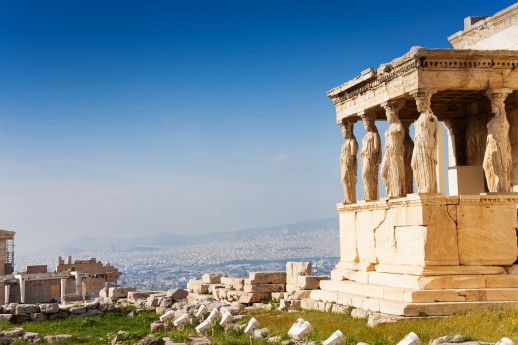 Greece in November and December

From the ancient sites that dot the Athens cityscape to the iconic blue and white buildings that cascade down the slopes of Santorini; from the golden beaches of the Greek islands to the bustle of the capital city’s cafes and bars, this enchanting nation has much to offer the 30-plus million visitors that arrive on its shores each year. Most of these tourists arrive during the peak summer season, drawn by its warm climate but resulting in large crowds at the major attractions. That’s just one of the reasons you might want to consider scheduling your Greek odyssey for the cooler months of November and December.

It’s impossible to visit Athens without being drawn to the magnificent ancient site that overlooks the city: the ruins that comprise the Acropolis. Vast crowds throng the hilltop site during the summer, but if you visit during the cooler months, it’s far more tranquil, allowing you to truly appreciate the splendour of this citadel.

When you’ve finished exploring the Acropolis, a downhill stroll will lead you into Plaka: one of the oldest neighbourhoods in Athens, and home to the brand-new and very striking Acropolis Museum. The museum was opened in 2009 and has provided a permanent home for many of the artefacts found on the slopes of the Acropolis as well as a glass-floored view of the ongoing archaeological excavations taking place beneath the building. Take your time to soak up the atmosphere as you stroll through the narrow streets of this charming neighbourhood, stopping at one of the tiny tavernas to sample a few of the local delicacies before emerging at Syntagma Square.

From the city’s port, Piraeus, it’s a five-hour journey by fast ferry to the island of Santorini, which beats out some tough competition to earn its reputation as one of the most romantic of the Greek Islands. Santorini is the remnant of an ancient volcanic caldera, and many of its villages, including the much-photographed village of Oia, are comprised of a collection of white-walled, blue-roofed houses that tumble down the cliffside. During the summer, it can be difficult to find a quiet spot away from the jostling crowds, but if you visit during the winter months, the trade-off for less settled weather is having many of the most coveted viewpoints to yourself. You may even be rewarded with a light dusting of snow on the higher points, transforming an already photogenic landscape into something quite magical.

A change in season can transform a destination you think you know well into somewhere completely different, so whether you’ve already sampled the many delights Greece has to offer or it’s been languishing on your bucket list for years, your personal travel manager can help you plan your Greek winter holiday.