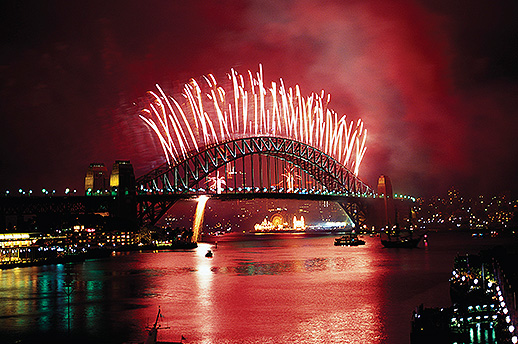 New Year’s Eve – Where will you be?

As the end of another year draws nearer, thoughts turn inevitably to the one ahead: what will it bring us, what do we hope to achieve, and perhaps most importantly, where will we go? Here are some of our favourite venues around the globe in which to ring in the New Year. It may be too late for this year, but there’s plenty of time to start planning for New Year’s Eve!

As the first place in the world to see the sun, this small city on the east coast of New Zealand’s North Island comes alive on New Year’s Eve, playing host to the Rhythm and Vines music festival which has been running since 2003 in its vineyard setting. If crowds aren’t your thing, the region also has some of the country’s best, and most deserted beaches and surf breaks, plus it’s renowned for its excellent wines so you can take home a few souvenirs.

In Scotland, New Year’s Eve is known as Hogmanay; in Edinburgh that means a four-day long party that includes processions, concerts and plenty of whisky. On New Year’s Eve itself, the city’s main shopping thoroughfare, Princes Street, becomes the site of a huge street party, for which just 100,000 tickets are available. The venue is overlooked by Edinburgh Castle, from which a cannon is fired on the stroke of midnight, followed by a huge fireworks display.

It wouldn’t be New Year’s Eve without a pyrotechnic display, and the city of Hong Kong really knows how to do fireworks. The already dramatic skyline of this city is further illuminated by a hugely impressive display, which concludes with a fire dragon that dances across the sky. Head to one of the city’s many rooftop bars, get out on the water or head up Victoria Peak for the best views of Victoria Harbour.

The Happiest Place on Earth becomes even happier on New Year’s Eve, with a selection of festivities that are designed to delight even the youngest revellers. Magic Kingdom is open late so you can ride the rides until 1 am, but there are also dance parties, special dining, live entertainment and confetti explosions to keep the festive mood alive. Just before midnight, the sky above the Magic Kingdom lights up with a huge fireworks display.

Already considered by many to be the quintessential city of romance, on New Year’s Eve (or La Réveillon de Saint Sylvestre) Paris becomes even more enticing. The city’s landmarks are lit up for the festive season and a great way to see the highlights is by taking an Illuminations tour. Treat yourself to dinner on a riverboat on the Seine, take in a cabaret show, join the street party on the Champs-Elysées and watch the fireworks exploding over the Eiffel Tower.

If you’re in Iceland for New Year’s Eve, it’s just ten days or so past the shortest day of the year, so whilst the day is short (the sun has set by 4pm and doesn’t reappear until after 11 the following morning), the hours of darkness provide excellent conditions for fireworks displays and huge bonfires, both of which are a big part of the evening in this part of the world. The next morning you can cure yourself of the after-effects of a big night out, with a swim in a natural hot spring or a roll in the snow (or both).

Between November and February, more than 450 balls are held in Vienna, but the Hofburg Silvesterball, which takes place on New Year’s Eve in the city’s former Imperial Palace, marks the official start of the season in true, fairy-tale style. The dress code is formal (think floor-length gown and long gloves for women, tuxedo with bow tie for men), and knowing how to waltz is recommended, but you can also find a more contemporary dance floor. When the clock strikes midnight, you’ll hear Austria’s largest bell chime in nearby St Stephen’s Cathedral, then join the crowd in a massed Blue Danube waltz. The Viennese are not the sort to let a celebration finish early though – the ball continues into the wee small hours, wrapping up at 4 am.

Celebrations revolve around the Victoria & Albert Waterfront, where a concert and midnight fireworks display provide the entertainment and the city’s spectacular setting at the foot of Table Mountain provides the backdrop. If you’re looking for a more relaxed atmosphere in which to celebrate, head to one of the vineyards of the Western Cape (less than an hour’s drive outside Cape Town). Alternatively, pack a picnic and watch the stars come out in the African night sky from Table Mountain or one of the city’s many beautiful beaches. Once you’ve rung in the New Year, head out on safari at one of the game parks within a few hours’ drive of Cape Town, such as Inverdoorn Game Reserve, which is also home to the non-profit Western Cape Cheetah Conservation.

For more inspiration on finding the perfect place to see in the New Year, contact one of our personal travel managers here.