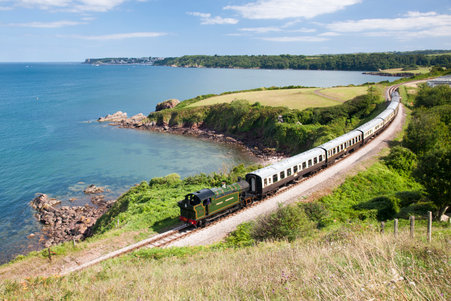 Some of the world's best train journeys

Forget the driving holiday – for the best way to see some of the world’s most stunning scenery, why not hop aboard a train? All you need to do is sit back, relax and watch the world roll by…Here are some of the best train journeys around the world.

The legendary Orient Express is still fully operational today, and offers one of the world’s most authentic luxury train experiences. The train was made famous by the Agatha Christie novel and subsequent film adaption, and the original journey of Paris to Istanbul is available, as well as a choice of many other trips and cities around Europe, including Venice, Krakow, Dresden and London. The Paris to Istanbul trip runs just once per year, and passes through seven countries in six days. Beginning in Paris, roll along the tracks through the beautiful mountains of Switzerland, and then continue via Austria to Budapest. Here, disembark to explore the banks of the river Danube, and relax in five star accommodation. Other highlights of the trip include an overnight stop in Bucharest, Romania. One of Europe’s best-kept secrets,  Bucharest is dotted with spectacular fountains, and stately historical buildings. The Orient Express concludes its journey in the Turkish capital of Istanbul, crossing through the vast landscape of the Thracian Plain on the way, marked by endless rolling green fields, and stunning views of the countryside below.

Australia’s very own Indian Pacific is one of the must-do train journeys in the world, and is named after the two oceans that it joins. This trip covers an incredible distance of 4,352km, spanning the width of the entire Australian continent, from Perth to Sydney. The Indian Pacific provides a unique perspective of the vast, arid landscape of the Australian desert, with many parts untouched and unchanged for thousands of years.  A non-stop journey, from either Perth to Sydney vice-versa, takes a full three days and three nights. However, it’s well worth breaking up the journey to spend a little extra time exploring and discovering the charm of the countryside along the way. Unforgettable moments include the wide, dusty red-brown plains of the Nullabor, and the winding journey through the misty Blue Mountains, with panoramic glimpses of the vast expanse of forest below.

The epic Trans Siberian Railway is the longest rail journey in the world, with the original route beginning in the Russian city of St Petersburg, concluding in either Vladivostok, or Beijing.  A third route, and one very popular amongst travellers, was added during the Soviet era in the 1920s, running from Beijing to Moscow or vice-versa. There are a huge range of journeys and choice of tour packages available along the Trans Siberian Railway, but for the full experience, the full Moscow-Far East trip covers a third of the globe and includes some unforgettable sights.  Take full advantage of the optional activities,  such as a guided walking tour through the brightly coloured buildings of Moscow, including the iconic St Basil’s Cathedral, and the famous Red Square. Further along the journey, if you’re travelling during the Russian winter, rug up for a spot of Khaski dog sledding, for a truly unique way to see the surrounding white snowy landscape.

The famous Canadian Rocky Mountains, or ‘Rockies’, are a UNESCO World Heritge Site, and the stunning sights are best enjoyed by train, where you can sit back, relax, and take in the endless rolling greens. Depart from the picturesque city of Vancouver, with its surrounding mountains and ocean. Then, begin a two day ascent through the Rockies, enjoying the snow-capped peaks and endless drops from the comfort of the viewing platform on board. Once at the peak of the mountains, take some time to explore, breathe in the crisp fresh air, and learn about the native wildlife, of which there is plenty – look out for antlers in amongst the trees.  The tour concludes with the descent from the top, to the stunning blue-green waters of Lake Louise, perfect for a relaxing paddle. Then, come liven up with an overnight stop in the bustling mountain town of Banff, before the tour concludes with a memorable cable car gondola ride to the peak of Sulphur Mountain, with the sparkling waters of the Bow River below.

Talk to your local, personal travel manager to find out more.