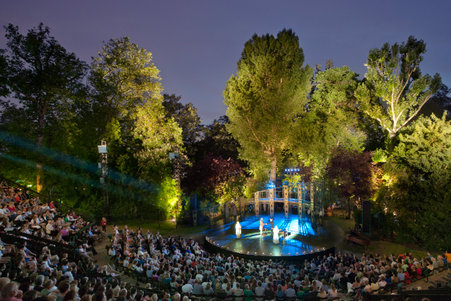 The recent release of ‘The Best Exotic Marigold Hotel’ has seen a resurgence in India as a holiday destination. There are also many other films that have sparked amongst their audiences a longing to see the iconic locations for themselves. Here’s our guide to some of the most memorable, and how you can experience your very own movie magic, on your next holiday.

Inspired by the success of the film, TravelManagers have created their very own ‘Best Exotic Marigold’ adventure through India. The 12 day tour features overnight visits to many of the real hotels used in the film, including the ‘Marigold’ – which is in fact Ravla Khempur, a charming rural palace one hour from Udaipur. Jaipur is another highlight, and was the location for much of the filming of ‘The Best Exotic Marigold Hotel’ – wander through the Marigold flower market, and take in the burnt orange and yellow buds piled up everywhere that the eye can see. The tour also features those other Indian destinations that can’t be missed, including the Taj Mahal, Delhi’s Red Fort and India Gate, and the sprawling lake of Udaipur.

Such has been the popularity of Stephenie Meyer’s books, and the resulting film series, an entire ‘Twi-tour’ industry has emerged as a result. Twi-hards from all over the world have converged on the small town of Forks, and the nearby community of La Push, in Washington state, where the Twilight saga is set. Daily bus tours traverse the locations as described by Meyer in the book, such as the local school, where Edward and Bella first met. There are of course, plenty of photo opportunities.

For those inspired by the actual scenery of the films, head to Oregon – this is where the exteriors for the majority of the films were actually shot. Three day guided tours provide an in-depth exploration through the real-life Twilight world, through the charming old-world town of Saint Helens, and see the alley where Edward saves the life of Bella. Chat to locals, and hear their stories of the cast and crew, before heading to Veronia, the stand-in location for the town of Forks. Finish with a visit to the majestic Oregon coastline, and then into the deep green forest surroundings of the Multnomah Falls, scene of some of the most memorable Twilight moments.

The Harry Potter franchise has been mesmerising both children and adults alike for more than a decade. Now, the movies have been brought to life like never before, with the recent opening of the Harry Potter studio tour just north of London. The tour features a look at just about everything associated with the most successful film franchise of all time. You’ll step inside sets, such as the Great Hall, Hagrid’s Hut, the Gryffindor common room, and the Ministry of Magic. Take a wander through Diagon Alley, just like Harry, Ron and Hermione, and see the shop fronts of Gringotts Bank, the Eeylops Owl Emporium, and the famous Ollivanders wand shop. You’ll also sneak a peek at Harry’s very own Nimbus 2000 broomstick, the Sorting Hat, as well as the Sword of Gryffindor. Perhaps best of all, the Harry Potter Studio Tour unlocks some of the secrets and mysteries of the films – you’ll learn all about the incredible animatronics of the Creature Effects Workshop, even coming face to face with the terrifying giant head of the Basilisk snake.

For the complete Potter experience, step out of the studio and back to central London for a tour of some of the real-life locations used – including Platform 9 ¾ at Kings Cross – you can even have your picture taken with a trolley seemingly vanishing into the wall  – just as Harry’s did. If you have a little more time, take a day trip to nearby Oxford, and visit the other Potter sights, including the grand Hogwarts library.

Eat, Pray, Love is the story of one woman’s journey of self-discovery, that has inspired thousands of people all over the world. The film adaptation of Elizabeth Gilbert’s best-selling novel, starring Julia Roberts, traverses through Italy and India before landing in Indonesia – and it is perhaps the beauty of Bali that is one of the film’s overriding themes. To reawaken your senses and rediscover your zest for life just like Elizabeth, take an ‘Eat Pray Love’ tour around the Balinese island of Ubud. You’ll meet characters written about in the novel, visit filming locations, and gain an insight into the Balinese culture and way of life. There’s something to suit all itineraries, with the choice of a one-day, or week-long tour for the full spiritual experience.

Lord of the Rings – New Zealand

For years, ‘Middle Earth’ tours have been exploring picturesque rural New Zealand, the location for Peter Jackson’s award-winning Lord of the Rings trilogy. Now, the region comes alive once again for the upcoming Hobbit movie, which uses many of the same locations. Travel to Matamata in the North Island, and visit the Hobbiton set, with a two-hour guided tour, on this private farm. Then, venture south to Queenstown, for a choice of full-day guided tours, that will truly bring Middle Earth to life. There’s even the opportunity to handle weapons and costume items from the film, as well as stories from the set. For those a little more interested in the scenery, there’s plenty of that too – enjoy lunch overlooking the well, remarkable, snow-capped peaks of the Remarkable Ranges.

Into the Wild – Alaska

If there was ever a film to inspire you to abandon all your material possessions to set of on a rugged adventure into the, well, wild, then this is it. But you need not actually go as far as Emile Hirsch’s character of Christopher McCandless, as the Alaskan wilderness is there to be explored by all. The ‘Magic Bus’ where McCandless spent his last days, and shown in the film, has become somewhat of a pilgrimage site for those inspired by this tale of freedom and wanderlust.

To see it for yourself, and relive many other moments from the film, follow the Stampede Trail to bus 142, through the rugged mountain terrain. A word of warning however – if you’re planning to undertake the trip, you’ll need to be a reasonably proficient hiker, and the journey takes approximately three days. Alternatively, if you’re just keen to experience the wild, and have no need to visit the bus, there are a number of day-long 4WD tours through the Stampede Trail, that are also suitable for families.

Sofia Coppola’s 2003 film is highly acclaimed for perfectly encapsulating the feeling of loneliness, alienation and unexpected love, with the city of Tokyo forming the alluring backdrop. Get ‘lost’ like Bob (Bill Murray) and Charlotte (Scarlett Johansson) with a stay at the Park Hyatt, the hotel used in the film – it’s just as you would expect, with spectacular views of the city skyline.  The district of Shibuya features prominently in the film, and it’s here you’ll find the location for the film’s karaoke scenes, Karaoke-Kan. Also in Shabuya is Shabu Zen, a restaurant located in the basement of the Creston Hotel, and the scene of Bob and Charlotte’s first disagreement. Finally, you can party like the film’s characters with a visit to Air in Daikanywama. Spinning the decks are some of the world’s top DJs, every night of the week.

This 2004 romantic comedy starring Adam Sandler and Drew Barrymore plays like a love letter to the easygoing Hawaiian culture and way of life, with the island of Oahu and its vibrant, colourful scenery, one of the film’s best features. If you’d like to revisit the film on your Hawaiian holiday, then check out the regions of Kaneohe, Ka’a’wa, Wahiawa, Makapu’u and Waimanalo. Oahu is also a great destination for film and television buffs in general, with a full-day 4WD tour starting in Waikiki, and taking in locations used in a huge range of movies and TV shows, including Lost, Godzilla, Jurassic Park, Pearl Harbour, plus many more.

Enjoy your very own Greek-island hopping tour, Mamma Mia-style. The 2007 movie adaptation of the hit Broadway musical, starring Pierce Brosnan and Meryl Streep, was filmed on a variety of Greek islands. Although the movie’s setting of Kalokairi is fictional, the real-life location of the climatic wedding scene is the small island of Skiathos and the pretty surrounding harbour. From here, travel by boat to the neighbouring island of Skopelos. Relax and watch the sun set on Kasteri Beach, where much of the film was shot. Alternatively, if the charming village scenes were your favourite part of Mamma Mia, head to Damouchari – many locals were extras and will no doubt have some great tales to tell. If you dare, you can also make like the film’s female stars and take the plunge off the Damouchari jetty.

The city of love has been portrayed many, many times on screen, but Woody Allen’s whimsical 2011 film ‘Midnight in Paris’, took a step back in time, painting Paris in a whole new, magical light for a new audience. For those who saw the film and would like to follow in the footsteps of Owen Wilson’s character of Gil, there’s the option of either a day, or night tour, wandering the same rocky, cobblestone streets. Travel back for your own surreal experience, with a visit to Deyrolle – one of the most unusual shops in Paris, and the location for the film’s late night cocktail party scenes. Recreate the lively cafe scene as enjoyed by Gil, with a visit to the St-Germain-des-Pres – you may not meet Hemingway himself, but it’s the next best thing!

Plan your next dream holiday with your local, personal travel manager. Visit http://www.travelmanagers.com.au/ptm-search/